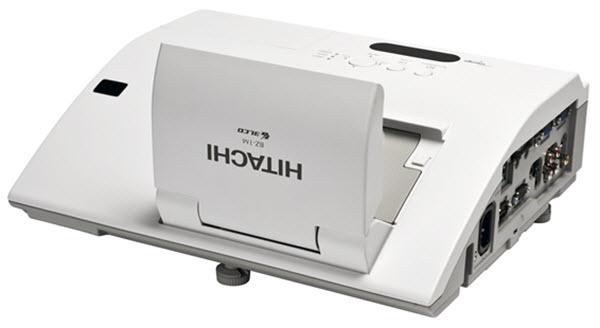 The Hitachi BZ-1 stands apart from the rest of ultra short throw interactive crowd in more ways than one. To begin with, most are DLP-based, while the BZ-1 is LCD-based. That's enough to make it of interest to anyone concerned that people in the audience may be sensitive to DLP rainbow artifacts.

Second, it detects the pen's position through a combination of infrared and ultra sonic signals. Compared to TI's approach, which most DLP projectors use, this gives the BZ-1 the twin disadvantages of having to calibrate the pen and having to touch the pen to the screen instead of just point at it. However, it also gives it the advantage of maintaining full brightness in interactive mode. In our tests, it fully lived up to its 2500 lumen rating.

More generally, the BZ-1 is a particularly capable member of the breed, with 1280x800 native resolution, excellent data image quality, and better video quality than most data projectors. It's also a near bargain for what it delivers, with a $1795 estimated street price and widely available for about $1,500.

Ultra short throw. A key benefit for any ultra short throw projector is the ability to throw a big image from a short distance. In my tests, the BZ-1 needed only a little over 13" from the front of the projector, or a little over 24" from the mirror, for a 92-inch diagonal image at 1280x800. This is consistent with Hitachi's claim, with a full range of a 60" image at 4.7" from the front of the projector to a 100" image at 15.4".

Interactivity. As is typical, the BZ-1 comes with one interactive pen. The pen's driver will let you use the pen as both a mouse and as a drawing tool with any annotation program, including the Hitachi StarBoard software it comes with. Hitachi's choice of interactive technology limits you to screens with a hard backing, since the pen needs to press against the screen, but it also lets you interact without any loss of brightness.

Reasonably fast reaction time. Interactive projectors vary in how quickly they respond to pen movements. The BZ-1's reaction time is slow enough to notice the lag. However, it's fast enough so that using it felt comfortable from the first time I tried it, without needing practice to get used to it.

Easy to handle interactive pen. The BZ-1's interactive pen is much thinner than the pens for most DLP interactive projectors, making it more comfortable to hold and easier to handle. This is welcome in any situation, but particularly helpful in a classroom, where children with small hands may have problems using an overly thick pen.

Excellent data image quality. Data image quality for the BZ-1 is excellent. Colors in my tests were vibrant and well saturated in all preset modes, and both black on white and white on black text was crisp and readable at sizes as small as 7 points. I saw a slight color balance problem, with some dark shades of gray showing slight tints, but the key word is slight, and I didn't see the problem in any real world data images. Also worth mention is that the image was rock solid with an analog connection, even on screens that tend to show pixel jitter. The projector's auto-iris also kicks in to make dark images darker with no annoying lag.

Better than par video quality. The BZ-1's video quality isn't great, but it's good for a data projector. Color was a little dull, as you would expect from a low contrast ratio; I saw a slight loss of shadow detail; and black and white scenes had a sepia tinge in Cinema mode. However, the video is still better quality than most data projectors offer, and it's good enough to let you watch a full-length movie comfortably. It doesn't hurt either that as an LCD projector there is zero possibility of being annoyed by rainbow artifacts.

Can use for an interactive tabletop. Unlike Hitachi's earlier generation models, the BZ-1 is designed to mount either horizontally, facing a screen, or vertically, using Hitachi's $199.95 mount, for interactive tabletop applications. (You can't simply rest the front of the case on a tabletop, which would block the front vents and interfere with cooling.) Also worth mention is that the fan is loud enough -- Hitachi rates it at 34dB -- that it could be annoying to sit right next to at a table. In Eco mode, however, the noise drops to a far quieter 28 dB.

Surprisingly portable. The BZ-1 is unusually portable for an ultra short throw projector. At 9.1 pounds, it's light enough to carry easily by hand from room to room or even bring with you on the road, at least occasionally.

Reasonably good audio quality. The BZ-1's audio isn't the best I've ever heard from a 10-watt mono speaker, but its good enough to make out words easily, and loud enough to fill a small to medium size conference room or classroom. For larger rooms, you can easily connect to an external sound system.

We measured Daytime mode, the brightest choice, at 2536 lumens, which is bright enough for the 92" diagonal image we used for testing to easily stand up to the ambient light in a typical conference room or classroom. For lower light conditions or smaller images, six other presents offer an assortment of color correction settings and brightness levels, with whiteboard the least bright choice at 1281 lumens.

You can also lower brightness by roughly 40% with Eco mode, which doubles the rated lamp life from 3000 to 6000 hours. At $329 (list) per lamp, that makes Eco mode well worth using.

Good brightness uniformity. The BZ-1 does a good job of maintaining uniform brightness across the screen, although it's not quite as good as our measurement of 80% uniformity implies. The brightest and dimmest areas on the tested projector were all across the bottom of the screen and close enough together for the center bottom to show as brighter on a solid white screen than the left and right corners. However, the difference was little enough so it didn't show with text or graphics breaking up the image.

Good connectivity. The side panel on the BZ-1 offers a full set of connectors, including an HDMI port for a computer or video source, two VGA ports for computers or component video, a pass-through VGA monitor port, and both S-video and composite video inputs. Audio ports include two stereo miniplug jacks and a set of stereo RCA phono plug jacks, with menu settings that let you pair any of the audio inputs with one or more image inputs. Also included is a miniplug microphone input and a set of stereo phono plug jacks for output.

In addition, there's a USB A port for a USB memory key to read JPG, PNG, BMP, GIF, and PDF files directly; an RS-232 control port for a computer or third party controller; and a LAN port for data as well as for controlling the projector over a network. Finally, the USB B port for connecting to your computer for the interactive feature also lets you switch between providing mouse control with the pen or projector's remote, and using the USB port to display images.

Needs recalibration. As with any interactive projector that needs calibration, you have to recalibrate the BZ-1 any time you move it, change resolution, or change image size with the digital zoom. However, calibration involves touching the pen to only nine points on the screen and takes less than 30 seconds.

The pen must touch the screen. The front of the BZ-1's interactive pen is a switch that you press against the screen to let the projector know the pen's position. This limits what you can use as a screen to hard surfaces, and it means you have to stay right next to the screen to interact with it. It also means that if you put the projector on a low table in front of the screen instead of mounting it overhead -- because you're using it as a portable for example -- you either need to stay with a relatively small screen size, or you have walk around it (and be careful not to trip on it) to interact with the entire screen.

No 3D. With more and more projectors offering 3D, it's worth mention that the BZ-1 doesn't. For most people, this shouldn't matter. If you think you'll need 3D in the near to mid term, however, this is an obvious shortcoming for the BZ-1.

The BZ-1 is, quite simply, an impressive ultra short throw interactive projector. It delivers a bright, 1280x800 image, excellent data image quality, good video for a data projector, good audio, a full complement of ports, the ability to work in tabletop mode, and suitably quiet operation.

Stacked against these strengths is a very short list of limitations, and no actual weaknesses. Granted, if you need 3D, you'll need to look elsewhere, but that's not a weakness so much as a matter of needing a different category of projector.

The BZ-1 also delivers lots of welcome extras, from the 6000 hour lamp life in Eco mode to the ability to read files from a USB key to the guaranteed lack of rainbow artifacts. Also in this category is that the mirror automatically closes when you turn the projector off to guard it and the lens against dust. Finally, don't overlook the BZ-1's portability compared to the competition. For the moment, at least, the Hitachi BZ-1 is one of the most attractive ultra short throw interactive projectors on the market, and a good benchmark to measure others against.

For more detailed specifications and connections, check out our Hitachi BZ-1 projector page.