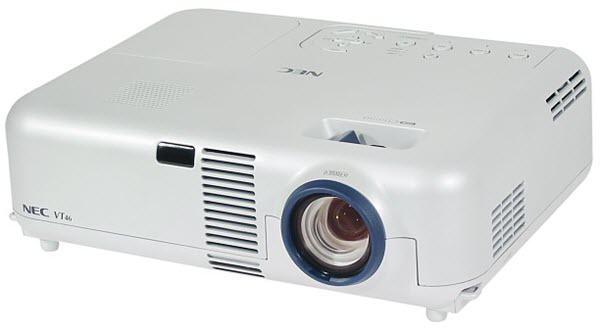 Front Projection Instead of a TV

Unlike most projector enthusiasts I wasn't really setting out to recreate the theater experience.Â My main motivation for looking into front projection was to make the room bigger and less cluttered by getting rid of my bigscreen TV (RPTV).Â  Here is a picture of me test-hanging the screen frame on the wall—it shows the big ugly TV that I wanted to make disappear.Â  Of course I also wanted a giant image!Â  I was excited that the new DLP TVs were only about a foot and a half deep, but they were still room-dominating and expensive.Â  (Plus, I want to stay away from DLP until 3-chip solutions are affordable or color wheels are spinning much faster than current versions).Â  I considered plasma, but the price and the warranty (can you imagine how much it would cost to ship a plasma monitor for warranty repair) turned my stomach.

I started looking into front projectors, but wasn't immediately encouraged.Â  I went to several of the big chain electronic stores where projectors are obviously aimed at the affluent consumer.Â  When you tell a salesperson that you're looking to spend only $1000 on a projector they look at you like you're crazy and tell you good luck!Â Besides, I found the only people that knew anything about projection systems were the high-end custom home theater shops that cater to people spending tens of thousands.Â  I did manage to find a business presentation company that let me see a couple of business projectors in action.Â  However they did not sell any of the units that I was considering.

Finally I was lucky enough to happen on ProjectorCentral.com.Â  This site was the one place I was able to find real-world reviews of using inexpensive business projectors for HT use.Â  I would have been unable to make the right decisions without the invaluable advice found here on ProjectorCentral.com.Â  I'm very grateful for this free service these fine people provide.

The Equipment I Chose

Being on a small budget, I chose an inexpensive SVGA projector and built my own screen.Â  I chose the NEC VT46 as the projector ($1000), and Da-Lite's High Contrast Cinema Vision screen material (DIY, $200 total cost).Â I was able to save $600 on the screen by building it myself.Â  (Da-Lite and Stewart screen materials can be purchased by the square foot for between $3 and $21).

I needed a long S-video cable, and was shocked to find out how much a shielded 20-foot cable can cost!Â I ended up making my own using some shielded wire I already had (two pair, each separately shielded and twisted and bundled in one round cord) and S-video connectors from Radio Shack.Â The hour I spent constructing this cable saved me at least $50.

Once I got started on this project I started upgrading audio equipment pretty fast.Â  I wanted to spend as little money as possible, but discovered that many of my components just weren't up to the task of making a newer multi-channel movie sound as good as it should.Â  First I had to replace my receiver because it didn't have an amplified center out.Â  (I used to use the TV as the center).Â  I chose the Sony STR-DE895 A/V receiver.Â  This unit supports every multi-channel standard you could want, delivers plenty of power (for a small room) to six separate channels and only costs $350.Â  Now that I had a 600-watt six-channel A/V receiver I just wasn't happy with my speakers anymore!Â  To save money I purchased studio monitors from The Guitar Center for my fronts, and used my existing JBL satellites for my centers and my rears.Â  I picked up a used 100-watt subwoofer for $75 that adds that punch needed for light-saber duels and such.

My room is small and far from the ideal for home theater.Â  My maximum screen width was 64 inches.Â  (I had to rewire a switch box to even make that possible).Â  The sofa is on the back wall, so the rear speakers could not be behind the listener except for a few inches.Â  The room has a window, a sliding glass door, and opens to the kitchen via a breakfast counter—so daytime ambient light was definitely going to be a problem.

In spite of all these problems, I decided that front projection was still the way to go.Â  For less than the cost of a new bigscreen TV I was able to have an 80" screen without the problems of RPTV (glare/reflections, viewing angle limitations, floor space).

For daytime viewing I'll need to install a curtain I can pull out to block the light from the kitchen. Even with a high contrast screen a lot of ambient light fades the picture.

The only real upgrades to the room for this project were a new sofa sectional and some track lighting. (And rewiring the triple switchbox because it was in the way of the screen).

The results have been worth the time and effort spent.Â The room seems much more open and uncluttered without the refrigerator-sized television.

I put a lot of thought and effort into the screen.Â  I'm glad I took my time, because my direction changed several times.Â Initially I was going to buy a pulldown Da-Lite Model-C in High Contrast Matte White.Â  However, I really needed a high-contrast screen for this situation, and thought a pulldown would look funny.Â  Fixed screens are ridiculously priced, so I decided to build my own.Â Total cost, including the Da-Lite High Contrast Cinema Vision material, was $200—about $600 less than the cost of the same screen pre-built.

If you have some woodworking skills, I would wholeheartedly recommend making your own screen.Â I made mine with an inner frame of 1x3 oak, and an outer masking frame covered in black fabric.Â  Considering the cost of fixed-frame screens, the savings can be considerable.Â  I found the outer frame to be much more work than the inner frame, and would recommend doing the outer frame first.

I decided up front that I wanted a 4:3 screen because I watch so much 4:3 material (older movies, Star Trek episodes, etc.)Â  Besides, my widescreen picture size is the same anyway!

For watching widescreen movies I made two mask panels out of the same material I used on the frame.Â I just sewed wide hems, and initially tried to mount them with elastic bands—had too much sag in the middle to be effective.Â I went rummaging around Home Depot for something light and rigid and found aluminum screen sections.Â They're cheap, light, and straight.

My digital camera is pretty poor, but I included a picture of the screen in use to show how bright the bars are without masking with my 400:1 projector.(Pretty d*** bright).

Since this projector is only capable of 400:1 contrast ratios, the unused portions of the output (side triangles created by keystone correction) are a lot brighter than I would like.Â  I made my masking wide enough (2") to allow for this, but still prefer to get the best picture out of the unit by not using keystone correction at all.

For now I'm happy with the projector sitting on top of the coffee table.Â  (I don't have kids).Â  I'm hoping to come up with a motorized ceiling dropdown mechanism, but haven't seen anything yet that I can afford or build.Â  This would be ideal because the projector could be even with the top edge of the screen when in use, but not hang down two feet from the ceiling the rest of the time.

My experience with this projector mirrors precisely what this site said in its review.Â  Contrast levels leave much to be desired in darker scenes, but overall the picture is very nice.Â  I'm actually astonished at how good it looks when playing a DVD!Â It's amazing that I only spent $1,200 (not including audio equipment)—talk about bang for the buck!

Overall I'm particularly pleased at how this project has turned out.Â  One day I'll probably scrape up the money for a projector with higher contrast ratio and resolution.

For more detailed specifications and connections, check out our NEC VT46 projector page.