I have always wanted my own home theater. I was the first person in my Southern California city to have a 27" Trinitron monitor, Dolby surround receiver (cost a grand back then!) and even a passive sub woofer. This was in the early 80s! Limitations in funding and proper housing prevented any new theater dreams, so I waited. I had lately decided that technology had advanced enough and prices have dropped to an affordable level--I began my research. I had no idea there was so much to learn.

The Player
The DVD player is a Denon 1600 that I researched for bang-for-buck quality and price. I have a fairly large DVD collection, so I made sure I had a nice set of shelves for storage in my design. For the component system, I was very concerned with proper circulation, so I used a heavy-duty bracket shelf system. I saw no need for the actual shelves. A local electronic store had a great selection of banana plugs to choose from. Anyone not using banana plugs for speaker-wire connection is asking for a real frustrating experience.

One Ex-X1
The final, and most important piece of equipment was the projector. I chose the InFocus X1 and soon regretted my purchase after the first test. The following lessons were learned early. I began in progressive scan and ended up with two images on the screen. My research determined I needed a $170 Component-to-VGA adapter box! I bought the box then found I could not adjust color or tint in VGA mode!! I also realized the importance of buying a 16:9 native projector vs a 4:3 like the X1. I also came to understand the meaning of the term "screen door" which was very apparent on the X1. I did not have very much viewing distance, so I tried to get used to it. I de focused a little, and that helped, but what is the use of a progressive scan system if you are only going to de focus the picture? I also realized that fan noise is a major problem. There was nothing I could do to lower the X1 fan noise without inhibiting airflow. Though the picture on the X1 was indeed good for the price, I also discovered that I was one of the unfortunate 20% that can see the "rainbow effect". In fact, it was driving me crazy! Weighing all the negatives, I decided to return the X1 for a refund. Now what do I do? I am forced to get an LCD projector, but every unit I reviewed only offered 400:1 contrast, and I had a taste of 2000:1 with the X1. I fell into depression.

I stumbled into a Big Lots (formerly Pick n Save) and found a very small recliner for $99. I ruled out recliners because they were puffy, big and expensive. The good news is the foot support tucks into a recliner and they are comfortable. I bought two of the small recliners, took them home and immediately found they were an inch too big to get up the stairs-- in every direction and configuration! I did not want to return them, they were perfect for the theater, so I removed the staples and bolts holding the recliner mechanism to the armrests. I was able to get them upstairs as separate pieces, then reassembled them. With my wife as my witness, I vowed to sell the recliners with the house. This task took an entire Sunday afternoon to complete, but the result was fantastic!

Speaker of the House 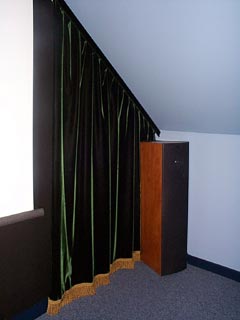 I knew I had to spend good bucks for a speaker system. I went to my local AV store and found that I did not like speakers that were made of plastic-- I don't care what the brand. Yet I could not afford the wood models. Most of the good speakers on eBay were selling as single or pairs. However, no one was bidding on this nice complete system of KEF speakers which included a PSB SubSonic 5. I never heard of KEF so I read up on them and was very impressed. I put the KEF center speaker at the top of the screen since the top of the screen was stationary, however, I was concerned about the sound coming from the top of the picture, so I added a previously purchased Kenwood center speaker on the floor to "centralize" the sound on the screen center. For the AV amp, I decided to purchase a Denon AVR-2802 to obtain 6.1 surround sound.

Its Curtains Rocky
To really give a theater feel, I spent around one hundred dollars for some great velvet and trim for curtains. I could have gone cheaper, but this velvet gave a great sheen. After having them sewn up, I installed the velvet curtains but soon found the beautiful dark green turned to black with the lack of proper lighting. I was going to go with track, but went with a cheaper solution and used some outdoor halogens. I aimed the lamps toward the curtains which released the beautiful sheen I used X-10 modules with an IR controller so that I can fade the lighting with my remote control. The new 2-way dimmer module LM14A worked great to fade the lighting down and fade-up back to my original dim setting. In the future I hope to get a window air conditioner and use the remote to control it as well. 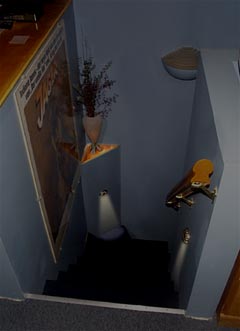 To keep my wife from suffering claustrophobia, I did not paint the ceiling black, rather I went with the wall color of blue in the viewing area. A little trim around the floor, my German Raiders of the Lost Ark movie poster, some mission pieces here and there and the theater is complete. All things considered, I do believe this project cost me about $5,000 to create. But to watch a movie without annoying cell phones ringing, babies crying, candy wrapper crackling or idiots giving commentary is such a wonderful feeling. No stinky nacho smell; No sticky, gummy bear floors; No parking hassles or stupid ads; And especially-- no missing an important scene or plot point trying to drain ones bladder.

Final Result
How do I know that my theater is a success? I watch the response of my guests. They get engrossed in the movie and react to the explosions when the entire room shakes. I listen to their conversation as they express what a thrill it was to watch the movie. As for me, the sound is extremely beautiful to hear and the sub-woofer literally quakes the floor. We were watching Dirty Rotten Scoundrels and my wife commented how she can hear the squeak of the chair when Steve Martin sat down. We watched Galaxy Quest and caught two pieces of soft dialog we had never heard before and saw one visual gag we had never seen before. All to say, this little theater is cramped, but AWESOME.

I hope this little tome has given you some ideas as well as a few cautions in creating your own theater experience.

For more detailed specifications and connections, check out our Panasonic PT-L300U projector page.