I like to thank all the previous contributors to this site for giving me ideas on how to install a projector on my own. Most of you know by the VGA projector I bought that it is a low cost HT, its probably the minimum one should spend.

First, let me start by saying I decided to install my HT in my family room instead of in my basement, simply because of the high cost of renovation which will far exceed the HT project itself. since my family room is brightly lit during the day, I only will be using the HT at night for DVDs and special events, and that is fine with me considering the high cost of replacing the projector lamp which last only 2000 hours at a cost of C$500. That is rather expensive to be spent on watching news and kids tv cartoon. I still have a 10 year old 36" Toshiba tv that still working fine.

Secondly, after researching and comparing manufacturers and specifications, I decided on DLP technology, I ended up with the final two, the Infocus X1 and the BenQ PB6100, ultimately I went for the longer warranty and 3x speed that prevent rainbow effect, I couldn't take the chance that one of us could be effected.

Thirdly, I didn't buy the manufacturer's ceiling installation kit [C$200] but instead I made it from an old dining chair I had, it worked beautifully because it was swivel and a slight tilt forward, the swivel made it easy to adjust horizontally and the forward tilt moved the picture up perfectly.

I was quite simple to make the ceiling kit, I hacked saw the foot off and the I bolted 2 "L" shape bracket on the inside of the tube to give it a cleaner look. I then sprayed it black to match the projector. total cost C$10.

I was able to run the s-video, RCA cables, rear speakers wires and power line through the ceiling and the front 4 speakers wires went under the floor and back up to the front, its a good thing not having a basement finished....A helpful hint, a cheap 3/4" measuring tape from a dollar store works well to fish for wires over a distances that is out of reach of a coat hanger. One item that is a must have is a stud finder.

Another helpful hint is to avoid fishing for cables again is to leave a sting taped to the s-video cables just inside the ceiling so you would not have to fish again when you decided to up grade to a XGA projector which do come with connector for component cables, PB6100 do not. I heard that component is much better than the s-video. My S-video is connected to my Sony DVD player and the composite cable is connected to my old Sanyo VCR, I also use the Sanyo to watch TV and to change channels.

WOW!!! it looks fantastic. So you are wondering what I did with my saving by going low cost, I bought a leather couch set. 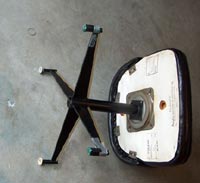 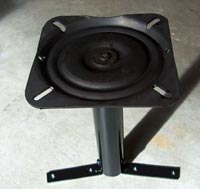 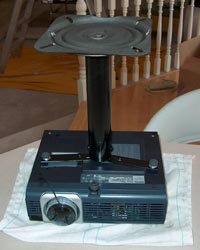 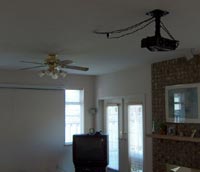 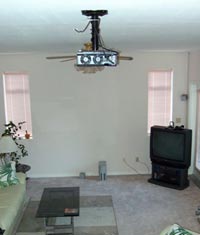 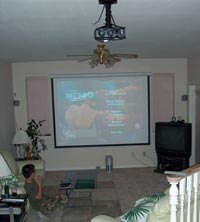