My Home Theatre setup is a budget version but works very well. We live in a small house with just one small living area. This required a system that didn't intrude on space or look conspicuous when not in use.

The projector is a BenQ 6200 and is mounted to the ceiling in the entrance hall and projects into the living room over a half-height wall. The couch sits against this half wall so the projector is slightly behind the seating.

The ceiling is a plaster board type so to mount the projector I simply drilled 3 small holes and put 3 long bolts through from the ceiling space and supported them with wide washers to spread the load - the 6200 only weighs 2.5kg. These bolts then go straight into the threads on the bottom of the projector. The only problem with this idea is that the projector is fixed into position and it has to be spot on to ensure it matches the screen. Luckily in my case the screen is moveable slightly. 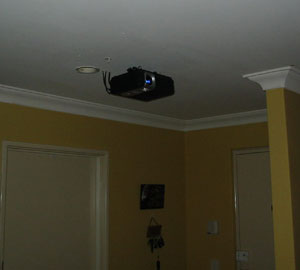 The AV setup is a Yamaha VX440 receiver, Play Station 2 for DVD's, Hitachi VCR for terrestrial TV (upgrading to a digital set top box soon) and analogue Pay TV (being upgraded to digital soon). This is all housed in 2 IKEA units joined together. I plan to make some doors with speaker cloth to hide it all for a neater look. The speakers are small JBL's mounted in the upper 4 corners of the room, with a small centre speaker in the AV units, plus the sub.

The 120" screen was a freebie and is made by Gulsan (or something like that). It is attached to the back of the AV units and pulls UP from behind them and then mounts to 2 hooks from the ceiling.

When the screen is not in use you would not know there is a HT system in the room. Except for the projector hanging from the ceiling but I have a plan to recess it and have it come down from the ceiling when required. 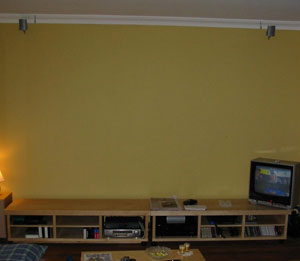 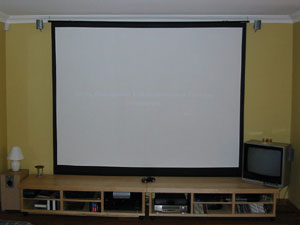 I think this is a brilliant setup for the money. The projector is bright enough to watch during the day. We have shutters on the closest window which block out 100% of the light but the room is open on the opposite side and there is a lot of light coming in from there. The image is superb and we cannot see pixelation from 3.5m. Hopefully the picture will be even better when we get a real DVD player. The surround sound is awesome and really gets you right into the movie. The gun battle scene inside the submarine from U-571 is a must for surround sound - you feel like you are inside the sub with bullets coming in from behind, above and from the side of you - brilliant. 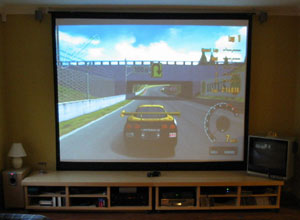 But the best of all is playing Gran Turismo 3 with the force-feedback wheel which I have setup in a simulator. Friends can not believe how real it feels and how much of a sensation of speed you get. It gets even the most anti-gaming person hooked in about a minute.