We had a fairly modest home theater system to start with. The system, which was about 4 years old, had a 27" Sony TV with a JVC DVD player which did not even have a 420p progressive output. The system was driven by a Marantz SR-5000 receiver with Infinity Interlude speakers. Our HT was housed in the living room.

We decided to upgrade the whole system and house it in a dedicated home theater room. We started the upgrade process by first remodeling our basement which was in a state of disuse. Our basement is fairly large and measures 23'x17'; it was already semi-finished and has a drop ceiling. We repainted the whole room including the ceiling panels and installed a new porcelain tiled floor. It has a support column in the center which had to stay in that position due to structural considerations. So, we decided to house the home theater in one half of the room as illustrated in the sketch below. There is only one window in the room and so we have complete control over the amount of ambient light. 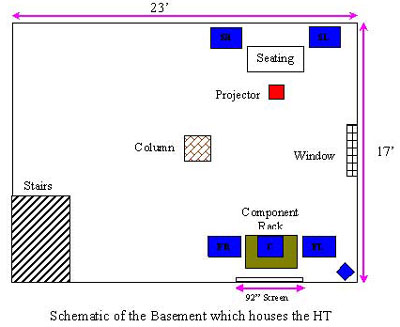 As for the components, we first upgraded from an all-in-one receiver to high-end separates. The system is now driven by Rotel RSP-1098 surround sound processor and powered by Rotel RMB-1095 five channel amplifier (200W per channel). We retained the front L/R/C Infinity Interlude speakers from the old system as well as the Sunfire Mark IV subwoofer. We replaced the rear surround speakers with Atlantic Technology 274T-SR dipoles. We also replaced our old DVD player with a Denon DVD-1600 which also offers DVD-Audio playback capability. All the components are connected to a Panamax 5100 power conditioner/surge protector. The A/V components are placed in a modular rack made by Sanus Systems. The system also has a Marantz CC-4000 5-disc changer. All audio interconnects and component video cables are from Tributaries Cables.

As for the projector, we selected the InFocus ScreenPlay 7200. We intend to use projector primarily for watching movies on DVD. We selected VuTec VuEasy screen with a 16:9 aspect ratio and Matte White fabric which has a 1.0 Gain. We chose this fabric as the ScreenPlay 7200 has very good blacks and so we thought that a grey screen was not necessary. Also, given the brightness of the projector (1400 lumens), we figured that a 1.0 Gain screen would suffice. The screen is permanently mounted on the wall and has a frame with black velvet masking. The projector was mounted just below the drop ceiling panels using the ceiling mount specifically made for this model by InFocus. The projector has a 1.4x zoom lens and is placed at about 12' from the screen. At this throw distance, the lens zoom is set to 1.2x. We had help from our A/V dealer in the installing the ceiling mount and the screen as well as routing all the cables behind the walls and the ceiling panels.

We are immensely pleased with our new home theater system. The sound from the Rotels is fantastic. In fact, we can improve it a few notches by upgrading the front speakers as I feel that the ones that we have don't do enough justice to the Rotels, especially the center channel. The latter will soon be replace by Definitive Technology C/L/R-2000. As for the projector, the picture quality is absolutely fantastic. We are seated at a distance of about 15' from the screen. The projector has a 1280x720 resolution and a 6-segment, 5x color wheel. With those specifications, while watching the movies from 15' away, there is absolutely no visible pixilation or the rainbow effect. We haven't watched any HD material on this projector yet. We plan to install the infrastructure needed for viewing HD content in the next few months.

Here's the view of component rack, speakers and the 92" screen. 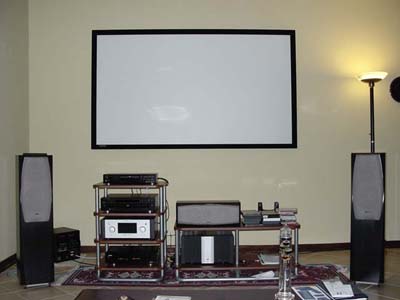 Here is the rear view of the system, including the projector. The rear speakers are mounted on shelves custom made from supplies that we bought from Home Depot. We painted the shelves with a metallic silver color to match the silver finish on the Rotels. In place of the center back channel, we mounted a nice picture that shows a panoramic view of the Roman Colosseum. The power cord that is temporarily hanging down from the projector will soon be hidden and routed to a power outlet installed above the drop ceiling panels. 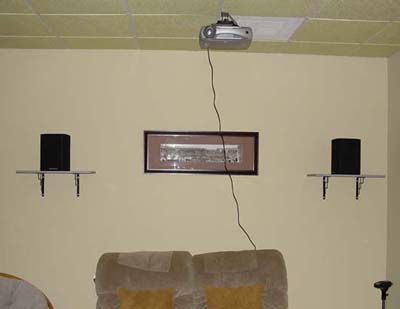 And, finally, here's the panoramic view of the whole HT setup.