Thanks for all the information I received from projectorcentral.

I first purchased the X1 projector and was very impressed by the picture, but it got a little choppy at 120" diagonal. I returned it and bought the NEC LT240K. At the time it cost nearly double the money to move up from VGA to an XGA projector, however my seating distance was at or just under 2 times screen width so the extra resolution made a visible difference. I soon discovered that resolution is addictive and I would like to have even more, but like most addictions they become expensive quickly. My basement was unfinished so I had time to tinker with different setups to see which I liked best. I started out projecting on a concrete wall painted white, then dry wall painted white and finally a Da-lite high contrast cinema vision screen. I have to say the dry wall really was not too bad. I am not convinced the Da-lite screen was worth the $1,000 I paid for it, however, it does look impressive when not in use.

I wanted in wall speakers, but could not find any reasonably priced ones with decent reviews. My brother in-law recommended the Energy Take 5.2 speakers so I read the reviews and it seems everyone who reviewed them loved them, so I ordered them, unheard. They were a reasonable $600 w/ powered sub. I mounted them in wall anyway (they are not an in wall speaker) and could not be more happy with the sound. My biggest sound improvement came when I switched to the Zenith DBV318 DVD player. I changed to this player because it offers 1080i output over component. I use coax out put on the DVD player and the optical output from my HD tuner. Don't even think about using the left/right RCA stereo outputs, no comparison.

I hate the way projectors look hanging down so I boxed in the projector. I know your not supposed to, but with such a large area to house the projector, I just could not imagine it getting too hot in there. I've been going a couple of months with no problems so far. If I blow the bulb prematurely, I will rethink it. 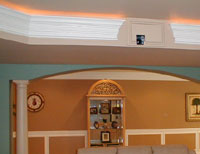 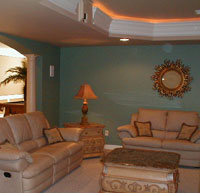