My home theater is located in our Family Room. In 1997, we underwent extensive renovations to our home, converting it from a Cape to a Colonial style house. Our family room is 24 feet by 25 feet and has a 13 foot ceiling. The family room is the center point of all of our family functions. When we built the Family room, I had not originally planned to install a projector, but initially purchased a 60 inch rear projection Mitsubishi television. Over the years that followed, we had wanted to install a fireplace, but the size of the Mitsubishi prevented us from doing so. After doing a lot of research, and using information provided on Projector Central, the NEC LT260 became the projector of choice â for image quality, lumen output and price. A projector with 1000 lumen output would not perform well in our Family Room because the room is never completely dark because of activities in other parts of the house â especially in the kitchen area that overlooks the Family Room. I viewed several LCD type projectors, but was not really satisfied with the image, so I decided to give the DLP Technology a try.

The screen, projector and receiver were purchased in February/March 2003. 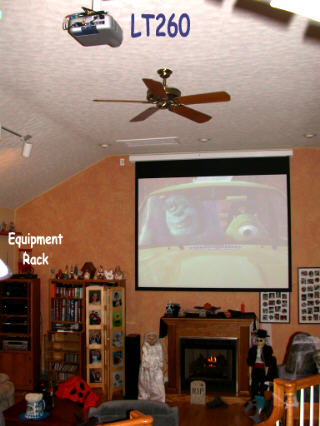 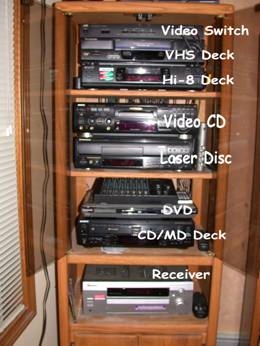 The total cost of the Main Equipment (projector, screen, receiver, speakers, cables and DVD player) is $5515.00. My equipment is pretty down to earth â nothing fancy or extravagant. It offers the biggest bang for the buck from the standpoint of sound and image quality. Adding the other equipment brings the total of my set-up to $7055.00. A Boss 8-channel Stereo Mixer is on top of the DVD Player. The mixer is used for Karaoke.

This was a self-install. The Projector was mounted 18 feet from the screen. The Ceiling Fan presented an obstacle by not allowing the projector to be mounted parallel to the floor. Even though I shortened the pole holding the fan, the projector had to be tilted up slightly and the screen lowered to prevent the fan from obstructing the projected image. I used the projector's Keystone correction feature to square up the image. I needed 50 feet of S-Video Cable and Component Video Cable. I use the S-Video for watching Cable TV, Home Movies and Karaoke. The Component Video is used exclusively for watching DVDs. The Pioneer Receiver allows switching of two Component Video Sources. When our local cable company switches to High Definition service, I'll use the second Component Video input for the Cable Box. The main speakers are floor standing and the Center Channel speaker lies horizontally. I mounted the rear speakers at the upper corners of the room. 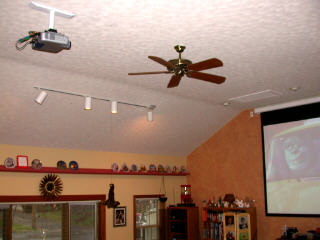 The Family Room has a wall of windows on the Westerly side of the house that captures the setting sun. I installed room-darkening shades behind the blinds that we lower when we watch shows in the late afternoon / early evening. 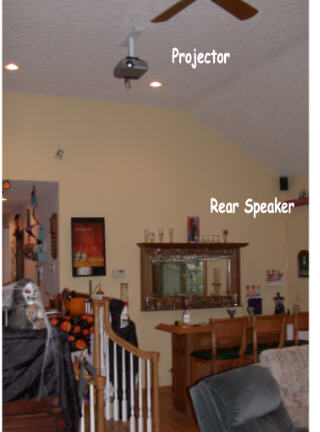 The Progressive scanning feature of the DVD player combined with the HD operation of the projector presents a truly awesome 120inch diagonal image. The pictures shown here in no way do the actual image justice! I have seen no rainbow artifacts, which seem to be characteristic of DLP projectors that have color wheels that operate at a 2X rate. I run the projector in Economy Mode. The viewing area is approximately 15 feet from the screen. The overlook area off the kitchen starts at 18 feet from the screen. It's nice to sit at the dining table, eat and watch movies and television programs. I like the fact that the Screen is out of the way and almost invisible when we are not watching television. 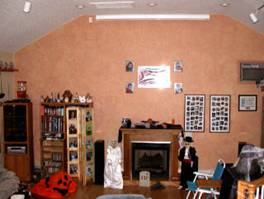 The NEC LT260 has performed well, even though the first lamp lasted only 60 hours. NEC replaced the lamp at no charge. One glitch that sometimes is frustrating is the projector does not always turn on when commanded. It takes two or three turn on attempts before it finally kicks in. NEC has no explanation for this. 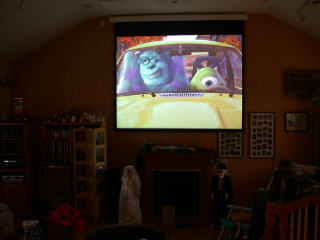 Now that the fireplace is installed and operational, there is no place for the Center Channel Speaker. My wife will not allow it to be "displayed" on the Fireplace mantle. So â I am considering replacing the center speaker with an in-wall speaker system. The walls in the Family Room were framed from 2x6 inch lumber, so I'll have plenty of room for the speakers and insulation. If I end up doing that, I'll have to invest in a Sub-woofer â something that I have not needed up till now. Hmmmmâ¦ If only NEC can upgrade the LT260 to a LT260K!