Initially i was planning to get big screen plasma TV for my basement. One of my friend suggested me to go with Projector. Till that time i did not even know about the projectors. It was six months ago. Then i started looking more information on the projectors. Mainly i used Projector central web site for my all research on projectors. Finally I decided with Panasonic. I bought the Panasonic projector, Da lite screen from Visual apex.

I started finishing the basement 2 months back. I hired one guy to finish the basement. After seeing all the posting on Projector central " Home theater" web page, I got some ideas how to make some good entertainment room in my basement, of course in my limitations of my budget.

Here are the some screenshots of my entertainment room 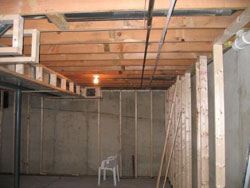 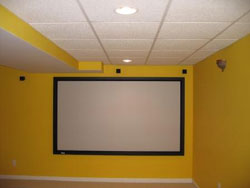 Other side of the room 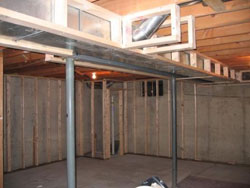 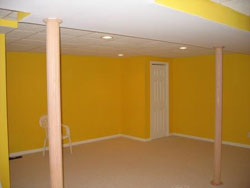 I bought ceiling mount from Perfectmounts.com website. Mount is good. And cheaper also. I mounted my Panasonic PT-AE700U. My Da-lite HD-Format High contrast cinema vision fixed screen mounted to the wall. It is 106' Diagonal. I mounted my Projector 13 feet away from the screen. I am using HDMI cable to connect to Toshiba SD-4980 which has HDMI output.

All my ceiling is Drop ceiling. It is easy to make modifications later. SO I have chosen that.

I installed sconce lights which I bought from Ligtingplace.com to my other side of the room. 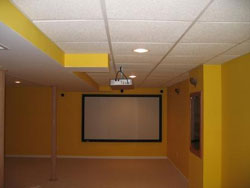 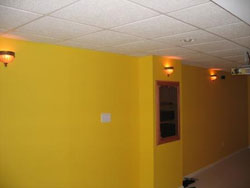 I also built Audio component rack built in to the wall. So no need to worry about wires hanging. All the wires are hidden. And it looks nice also. 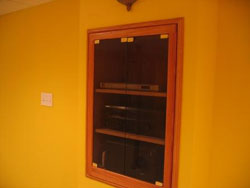 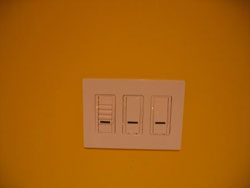 My speakers are Bose Accoustimas 6 which I am using them from 5 years. And my Receiver is Sony which is also old and has 5.1 surround Sound. I bought DVD player new. I bought Sony Subwoofer which adds up to my surround sound.

Here are the some of the pictures from the projector. 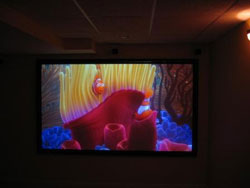 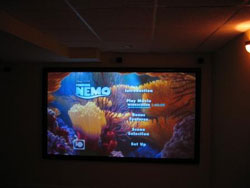 Total cost for all my home theater system

My furniture is pending now. And also waiting for my dish network to provide the HD channels. I am completly satisfied the way whole project turned out. I am really thankful to Projector central web site.