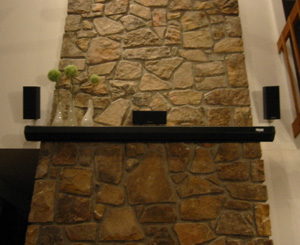 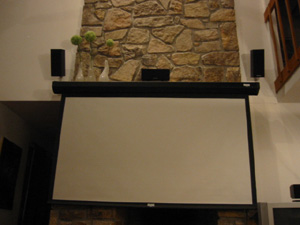 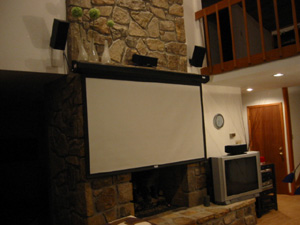 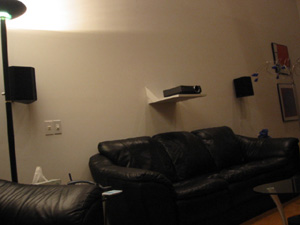 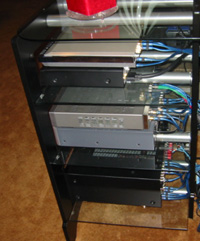 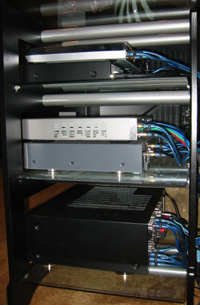 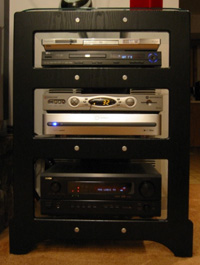 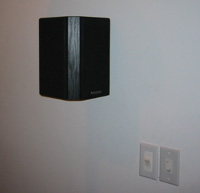 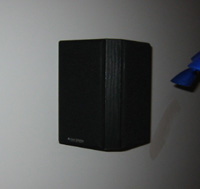 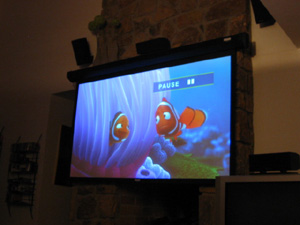 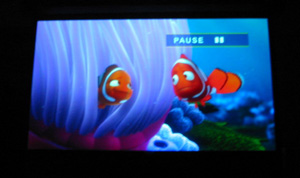 There are several L300u installations already listed on the site, but I figured I'd go ahead and send mine in due to the fact that the installation was very unique to most I've seen on projector central, yet many homeowners have a similar layout, and my think their main living area is "unsuitable" for home theater. Well, it isn't, and the proof is in the pudding, so read on.

My living room runs 30 feet by 15 feet. The ceiling slopes from 16 to 22' with skylights at the top beam. The centerpiece of the living room is an eight feet wide stone fireplace that runs the entire length of the wall. There is also a loft to the right that overlook the living room. It starts at eight feet, where the living room meets the foyer.

One nice thing about the fireplace is that it was built with a nice ledge to the right for a fairly large tv. I have placed a 36" Toshiba in this space for daylight viewing, and watching SD, or analog cable. So four impossibilities were:

1. No 7.1 surround. The 5.1 surrounds would have to be mounted to the sides of the viewing seating. There would be no room to put surrounds behind the viewer.

2. There would be no permanent screen, since it would cover the fireplace and look bad, plus the heat and byproducts of the fire would damage the screen.

3. There would be no ceiling mounting of the projector.

4. There would be no ceiling mounted screen.

The first decision I made was surround sound. In fact, the surround sound was installed and working long before the PJ came in. I knew I couldn't have floor speakers. There was no where to put them, and I didn't want them laying on the fireplace. So all the speakers, minus the sub, had to be wall mountable. This narrowed down the choices dramatically. Due to the seating of the non "hot-spot" viewers I decided the surrounds should also be bipolar, so even if views couldn't hear the far surrounds very well, they could still hear effects happening to the screen position near them, and maybe they would get some reflection too. I decided to go with the Atlantic Technology system 180, and it has been outstanding!

There was a entry to the dining room to the left of the fireplace, which meant the front speakers had to be mounted at about 9 feet, or about 1 foot above where the screen ended up being mounted. This sounds high, but when the speakers were pointed directly to the seating area where the sound was coming from was amazingly transparent.

The surrounds were mounted about 1 foot above the viewing area and about 3 feet away on each side. This meant that the settings in the Denon 3300 for the surrounds had to be turned down, volume wise, quite a bit. I thought I may have to put a delay in since the fronts were about 18 feet away diagonally, but it really sounded good, and passed the AVIA tests so I left it alone.

The sub was installed to the left of the sofa. Not only is it out of site. (A sub should be heard, not seen) but it also rumbles the sofa very nicely during action sequences! The center channel was more tricky, since it would need to be in the center of the picture, but not only for the screen, but for the 36" tube. Luckily, for the screen the fireplace had a nice ledge on it almost exactly where the fronts were mounted. The AT center came with a stand that lets you angle the center, but I actually ended up putting something under it to raise the angle to match the fronts.

For the TV I bought a second Atlantic Tech center channel and set it directly on top of the tv. I had a switch installed next to the sofa that lets me switch between the screen and tv center channels, depending on which one is in use at the time.

The screen mounting had to be the toughest part of the install. I couldn't hang wires from the ceiling because the screen wouldn't be rigid enough, and would sway back and forth when the screen came down. I ended up having a 2x4 drilled into the stone fireplace, then the screen was mounted on the 2x4.

The power was run to an upstairs bedroom and the controls for the motorized screen (Da-lite 45x80) were also installed next to the sofa.

The L300u was simply placed on a bookshelf stand directly above the viewing area. I misread the manual info, and the throw was very different than I imagined it would be, so the stand was mounted MUCH lower than I would have liked. In the future I will have it under-mounted to the bookshelf, which could then be raised about 7 feet.

The inputs to the L300u are direct, bypassing the amp switching. 50' component cable is used for the HDTV feed coming from a Comcast (Motorola) 5100 cable box. A 50' DVI cable is coming from a Bravo D1 DVD player. I can't say enough about the Bravo D1. It has an incredible picture!

This home theater gives me the best of both worlds. When I'm watching a 1pm college football game with sun blaring through the skylights I switch on the 36" tube and still enjoy surround processing, if it is available. When the sun goes down, it's showtime with an 8 foot screen with either HD or DVD sources. All the while staying in the comfort of my living room, and not having to dedicate a smaller room to home theater. The ambience of the high ceilings really give it a Cinema feel, but without the cell phones going off!

Oops, forgot to include some key information:

Great home theater. Didn't have to have dedicated HT. Can watch regular TV during daytime. Wouldn't trade Atlantic Tech system for ANYTHING.

(Next time) I would definitely go with a tensioned screen. Much more expensive, but I always have wrinkles and dimples in when the screen comes down with the current Cosmo. I would undermount the projector so the stand would be mounted much higher above the viewer.

If I had unlimited funds I'd go with an HD2 PJ for better contrast. L300u is great for most material, but don't watch "Pitch Black" and expect to be impressed.