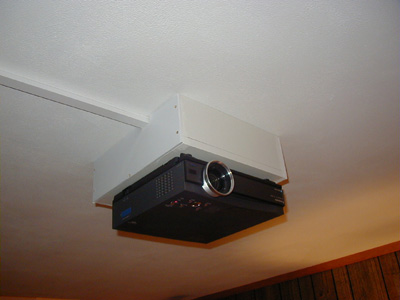 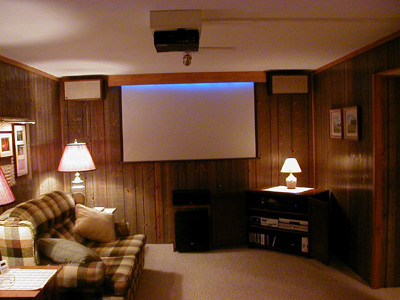 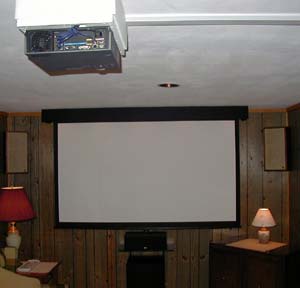 This is an update to the description and photos of my home theater you published in December 2003. Since then the following improvements have been made:

The projector had to be remounted on the ceiling back another 16 inches so the PT-L300U could fill the new 45x80 screen. A shadow box covered with Black felt hides the screen case and allows for the mounting out of sight of some 12 volt lighting to shine on the screen. A dimmer with an adjustable dimming rate allows me to slowly turn off the screen lights as the movie gets under way as well as slowly bring the lights up after the film has ended.

The upgrades have added about $1500.00 to my home theater investment.

The two pictures show the results of several years of work in turning my basement TV and listening room into a real home theater. The equipment is a mixture of old and new. I have 37 year old AR-4x speakers for the front left and right channels and two year old RCA speakers from Radio Shack for the center, rear surrounds, and sub woofer (12 inch). The audio and video equipment is housed in a cabinet that my parents bought back in the early 60's.

Nothing fancy or expensive regarding the equipment; the receiver is a Kenwood VR-509, which I got two years ago because it was one of the first low priced receivers with Dolby Pro Logic II. The DVD player is a Panasonic S35 and the OTA ATSC tuner is a Zenith DDV 420. The front projector is the Panasonic PT-L300U, which works well in this configuration. Excellent picture filling an old Da-lite 70X70 portable screen now mounted on the wall and used as a pull down.

The love seat or the recliner (not shown) can be easily pushed to the center of the room when showing a movie or watching television. With two canvas folding chairs pressed into service when needed I can seat five comfortably. The room is 11.5X20 including the staircase with a built in bar at the right rear of the room.

There are no windows so I can control the light with all lamps and fixtures on dimmers. I feed the projector with component video and also composite for showing videos from my digital camcorder. I built my own ceiling mount for the projector, which cost about $20 in material.

The screen, projector and receiver were purchased in February/March 2003.