My home theater has been an almost lifelong passion. I don't remember what first got me into home theater, but I do remember reading about Dolby Surround receivers back around 1987 and knew that I wanted one. I stared out working with just an ancient stereo receiver with four similarly aged speakers in a dual-stereo setup, with my first Hi-Fi stereo JVC VCR bought in 1992 for over $400(!). I still own that VCR and it still works. At least I think it does; I haven't used it for over a year and it's now basically my living room clock (no videotape in my theater).

I finally made the move to Pro-Logic with the purchase of a $200 Sony receiver during a clearance sale at a local retailer sometime in 1994. The surround soundtracks of the Star Wars trilogy and Top Gun (how clichÃ©) were favorites, pumping through my big-box Pioneer speakers with 12" woofers that were my mains, and the assortment of speakers that were used for center and surround duties. Also during this time, I was introduced to widescreen laserdisc courtesy of a college friend, and a new era was born.

After learning about how movies were sliced and diced for videotape, I knew this just wouldn't do. Luckily, the movie studios also started putting out movies on VHS in widescreen. Yes, the resolution was poor, especially 2.35:1 ratio films, but I didn't care. The same guy who introduced to me to the beloved black bars, also showed me the ways of discrete 5.1 channel sound via the first Dolby AC-3 encoded laserdiscs like True Lies, Clear And Present Danger and Die Hard With A Vengeance. Those Dolby "train" and "helicopter" trailers were major influences on my life, as was my friend's "early-adopter" attitude and his 70" Mitsubishi rear-projection TV.

By late 1997, I found myself with a Yamaha RX-V2090 receiver with the DDP-1 Dolby Digital decoder, a Pioneer DVP-700 LD/DVD player (back when a basic DVD player cost at least $400), and a 32" Toshiba TV with S-video (the most important feature at the time of purchase).

Scan forward to late 1999. By then, I had purchased a Technics SH-AC500D Dolby Digital/DTS decoder, a Toshiba SD-3109 DVD player, and all Definitive Technology speakers â ProMonitor 200's for front and back, ProCenter C2, and Powerfield PF 15TL subwoofer. I took that same friend's long-ignored advice and finally moved all my equipment into the 11'x13' spare bedroom to create a dedicated home theater with ambient light control. This was the best thing I had done in years (thanks Het).

A few years later, sometime during which the walls were painted dark blue and a couple KLH subs were added for rear channel bass; a new Denon AVR-2802 replaced the old Yamaha/Technics setup, and Pro-Logic II, Dolby Digital EX and DTS-ES were ushered in.

By this time, my patience was growing thin. Really thin. I had just about had it with going to the theater to get that "big screen" experience, when my experience at Lord Of The Rings: The Two Towers put the final nail in the coffin. The obnoxious crowd made me commit. It was time for bigger and better things, visual-wise, at la casa de Jer, and I was not going off half-cocked. No big-screen TV for me, it was front projection or nothing. I wanted a movie theater experience, but without the people, the poor exhibition, the garbage on the floor, and that nauseating nasal cocktail of fake-butter popcorn and 1001 perfumes and colognes. UGHH! That gives me the cold-shivers just thinking about it. Anywayâ¦

I started doing my research and kept a detailed notebook, and thanks to Projector Central that was made very easy. I had started out dead-set on DLP, but reading the reviews of the Panasonic PT-L300U made me think that for less money, and a very nice FREE Panasonic RP-62 progressive-scan DVD player, I should go with LCD. I never regret it. However, the projector was just part of it. I went as "all out" as I could.

In February of 2003 I bought a Da-Lite High Contrast Cinema Vision 92" diagonal 16:9 screen, a Belden/Canare 35 ft. component video cable (Monster what?) and 35 ft. Belden S-video cable, and a new double-wide rack for my components that would fit beneath the screen. All this was good and well, but something was nagging at me â that DVI input on the Panasonic projector was going to waste. But then, something happened. A new and improved version of the PT-L300U was announced, the PT-L500U, with higher resolution and an HDCP compliant DVI input, and retailing for less money!

I was sold, so I bought one this past February, and sold the "old" projector to a friend who was contemplating getting into the projector game. I bought a Samsung HD-931 DVD player with DVI output to take full advantage of the projector's 720p resolution. A straight digital connection is where it's at. At first, I used a cheap 10m DVI cable, but had some minor problems that I lived with for a few months, but eventually could no longer handle. I stopped using it for a couple weeks until I found a replacement, and I must say, that switch back to 480p analog component video was noticeable. It still looked good, but was softer than what I was used to. I now have a new DVI cable and it's smooth sailing â no more artifacts that I was seeing with the cheap cable. 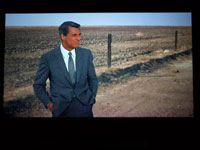 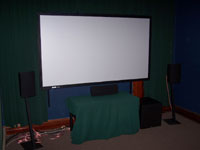 Screen shot of Cary Grant in Alfred Hitchcock's North By Northwest. Front of theater (obviously) - sound-reinforcement curtains cover floor to ceiling, courtesy of my mother (thanks Mom!). They work wonders and cost almost nothing. 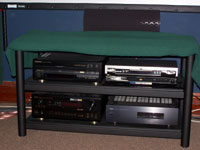 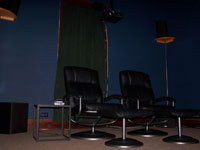 Back of theater - new Pronto remote on the stand, and KLH subs waiting to tell me which soundtracks have the most rear-channel bass. The all time winner â Unbreakable (opening scene just about killed one of those poor subs â yes, the bass was just in one channel). The Lord Of The Rings: Fellowship Of The Ring and U-571 are up there (or really, down there) as well. The projector is ceiling mounted with an extension to place it 30" from the ceiling, in order to not use any keystone correction. Equipment rack, complete with black duct tape to cover those blinding un-dimmable displays on the Samsung DVD player that shine right through the fleece. The old LD/DVD combo player is still in use (sporadically), as is the DDP-1 decoder for laserdisc Dolby Digital sound. Short Cuts is still not out on DVD, and the first and second versions of a certain space trilogy will probably never be. (curses!) The Titanic DTS laserdisc also sounds great, and the DVD is non-anamorphic, so the picture quality is similar.

It's hard to measure what home theater (and DVD!) has cost me over the years, but for today's setup, here's the rundown: