In the design phase for our new house (back in 1998) we were already planning our basement home theater and entertainment area. The entire back of the house (60' x 16') could not have any duct work or pipes below the floor joists and no beams or supports. This made it easy to do exactly what we wanted in the main area without any obstructions. We basically designed the house around the theater. I did the framing, electrical, tile, finishing and painting. But, we contracted out the back-breaking stuff, like the drywall. Construction started in the winter of 2000, and wasn't complete till the end of 2003 (during which time the finished area got larger than the original design). Here's some before and after shots of the theater/entertainment area. 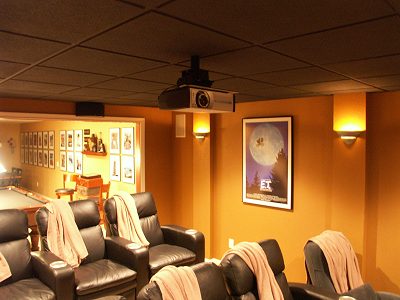 I selected the Sanyo PLV-Z2 for it's high-quality output and lens shifting flexibility. If I was getting a projector today, I'd get the Sanyo PLV-Z3. It's mounted using a universal mount as a unit-specific mount wasn't available at the time. After adjusting it to remove the vertical banding, I've had no problems, not even dust, and I have never cleaned the filter (maybe that's the secret). I have over 3000 hours on the original bulb and it's still going strong.

As you can see, I added architectural elements to the room like the bump-outs on the wall where the sconces are mounted. This serves two purposes. First, it makes it look nice and casts interesting light and shadows. Secondly, it disrupts the sound that hits the side walls so you don't get as much of an echo. The walls and ceiling are all insulated for temperature control as well as sound absorption.

I used a drop ceiling in the theater so I could easily make changes in the future. The ceiling tiles and grid were originally white and I painted them a flat black (a huge job that I had to finish off with a small air brush). I felt like Michelangelo after I spend 8 hours with a detail air brush above my head doing all the touch-up. If you can find black tiles and grids, I would highly recommend getting them because this was probably the hardest part of the entire project. A black ceiling is the only way to go in my opinion as it reduces the ambient light in the room, which is even worse for ceiling mounted projectors. Matte glass was used for the theater posters to reduce distracting reflections from the screen. 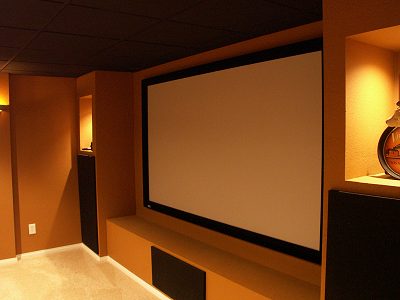 The screen is a 110" Da-Lite Cinema Contour HCCV with Pro-Trim. I've been very happy with the screen and the Pro-Trim is wonderful. I would highly recommend the Pro-Trim, as it creates great contrast at the edge of the screen which makes the image look brighter and with more contrast. For the speakers (all Klipsch) I framed holes, lined the inside with some spare carpet, and stretched speaker cloth over a wood frame. I also packed the front with tons of insulation to try and reduce any cabinet echoes. The niches where framed above the front speakers for display. With some appropriate items and soft lighting, they really add a lot to the front of the room. 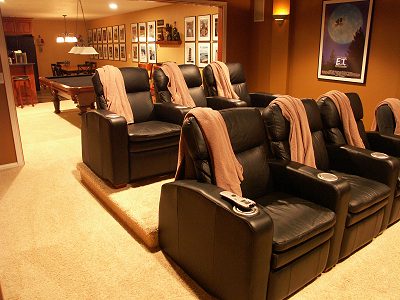 The seating is 2 rows of 3 Lazy-Boy theater seats with power recline. They're very comfortable and I would highly recommend them (we fall asleep in them all the time). You may notice a 7th seat, it's an iJoy massage chair. The second row is raised 7" and is carpeted with a lip around the sides and back to add a little detail (no lip on the front because the front row seats are flush against it). The box that the second row sits on is not attached to the floor. There's no reason to attach it anyway as it's so heavy. It also makes it easy to place it in the best position after you mount your projector. 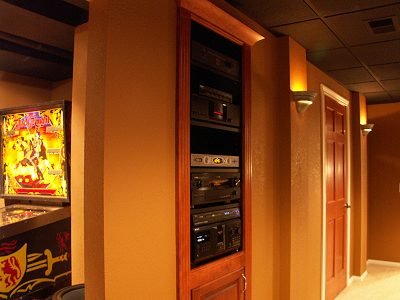 The component rack was a real challenge to design. I ended up with an inexpensive but custom black laminate cabinet that was mounted in a framed hole. Below the component rack is a bathroom base cabinet without toe kick (again, it was framed in). Two fluted panels and some crown molding and it looks like a piece of furniture. Because I used the same cabinet and molding as in the kitchen and bath everything in the entertainment space matches. This also includes the doors that were stained to match.

Nothing too fancy in the component area. A Yamaha RX-V1400 runs the 7.1 sound system and a V Inc. Bravo D1 does the 720p DVD output over a DVI-D cable. The Yamaha RX-V1400 up-samples all video sources to HD. For the HDTV source, I have my cable company's Motorola dual-tuner HDTV with DVR (also in HDTV). Our local cable company is very good so there's no need for an over-the-air HDTV receiver. Other components includes a Sony 300 CD player, Kenwood 150 watt/channel amp for the house sound system, LD player for my old-school LD collection, and the amp for the Hsu subwoofer.

On the left of the above picture you can see the arcade which is right off the theater. The Hsu Research subwoofer is also placed in the arcade right next to the component rack so it doesn't distract from the theater. Because this sub is a true subwoofer and the main speakers have 10" woofers, I'm able to have the subwoofer crossover point very low and you would never know that the subwoofer is in a different room (and hidden around a non-insulated wall). You just don't want to be in the arcade during an action movie as the room acts as a giant subwoofer enclosure.

These are the two coves in the front of the theater over the main speakers. I added pictures of these because I believe it's important to add some interest to the room other than just a large room with a big screen. Architectural details like this and the bump-outs against the wall where the sconces are mounted add a lot of interest. Color and lighting also play a major part. The walls in the theater are a darker version of the same color that's in the rest of the entertainment area.

Lighting is all done by SwitchLink dimmers along with a KeypadLink 6 with dimmer controller (these are all X-10 compatible). I then used an Infrared X-10 Command Console that controls the lighting via IR. The system remote is a Home Theater Master MX-800 which I use as RF only (because the components are on the side of the room). The remote also controls the lighting (including single button presets like "Theater" and "Party"). To control the lights, the remote sends out an RF signal, which the remote's RF receiver converts to IR and beams it to the X-10 IR console, which then sends the signal over the AC line to the KeypadLink 6 controller, which then sends the desired lighting level to each of the dimmers which then controls the lights (did you catch all that?). So the lighting commands go from RF to IR to AC. It was an inexpensive 3 zone custom lighting solution that didn't require any special wiring and amazingly works without a hitch. 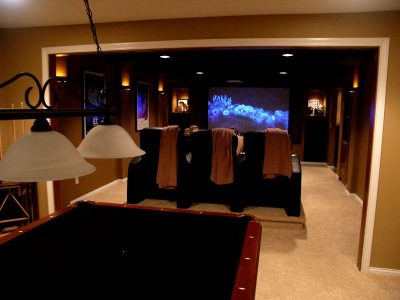 One of the design goals was to be able to see the entire theater screen when in the billiard room or kitchen. The top of the screen needed to be below the projector and the bottom of the screen needed to be above the top of the rear seats. This was all planned out in the framing stage where measurements were made and a mock screen was placed on the wall. Different heights of chair backs, heights of the rear seat step, size of the screen, and projector placement were all tried till a working solution was made. As you can see from the above picture, you can see the entire screen even from the billiard room (as well as in the kitchen). You can easily play pool while watching a movie or run to get a beverage or pop some popcorn without missing anything.

The project took me 3 years and the total cost was close to $60,000. That's for the entire 1,500 square feet of entertainment area and includes everything including kitchen cabinets, granite counter tops, carpet, seating, pool table, and everything. I did most of the work myself or it would have been a lot more (probably closer to $80,000 including furniture and everything). But, that would still not be bad for 1,500 square feet at only $53 per square foot. I estimate that the theater alone was about $30,000 including everything down to the seating, carpet, projector, and components.

If I was doing it again, the only thing I'd change would be how I did the ceiling in the theater. I'd pay the extra money for black ceiling tiles and the metal grids. I couldn't find a source at the time, but I'm sure such a product exists. We really enjoy our theater/entertainment area and spend just about every night using it. It was an expensive project, but we're getting a lot of enjoyment out of it and I'm sure it makes our house more marketable.