Here are a couple of pictures of my basement transformation. 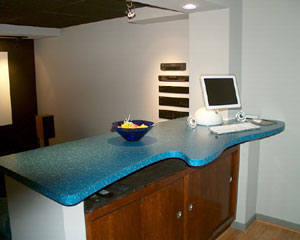 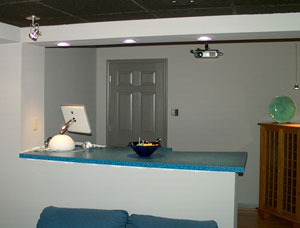 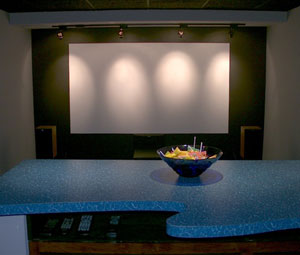 I have a temporary projector, Toshiba TLP-450. It's a data projector really, but supports 16:9. Contrast and lumen output doesn't compete with today's projectors but overall it's been a great projector for over 3 years.

My project began by clearing out the basement and making room for what would become a home theater. This required relocating the water heater as well as reconfiguring a few air ducts. We are fortunate to have 9 foot ceilings in our basement which enabled a raised wood floor in the bar area and a drop ceiling in the main viewing area. There were a few features which could not be moved and were incorporated into the design of the room.

The lowered area above the stage to which the track lights are attached houses a cold air return which was tapped into to circulate room air. Above the A/V components it was necessary to box in a small area to provide clearance for a few ducts which could not be moved. Adding a unique light above the components makes it appear as though it was meant to be. A pole and beam are enclosed in the area above and to the right of the bar.

The A/V components are recessed directly into the drywall and are housed in a custom built cabinet. The backside of the cabinet faces the unfinished basement and stays quite cool. Amplification and processing is all B&W and the DVD/CD changer is Panasonic. A rarely used VCR tops off the ensemble. Speakers are all Rotel and the front mains are powered by Rotel RMB-100 monoblocks. The center channel is custom recessed below the 100" diagonal 16:9 screen which is merely shade white painted drywall. The surround black aids to enhance contrast from a ceiling mounted Toshiba projector. All interconnects are Straightwire.

The custom bar top was designed in the shape of a wave or similar to an electric guitar and laminated with formica in a pattern which resembles waves of an ocean. The iMac also is connected to the projector for gaming and video production. A cabinet underneath provides plenty of storage for DVDs and other items. Black lacquer and stainless steel bar stools provide seating at the bar while a blue sofa bed provides seating in the main area and sleeping quarters for overnight guests. Blue Murano glass and other low voltage Italian lighting set the scene and are all controlled by a master IR remote.

In addition to being a home theater and audio listening room, it also serves as a recording studio with portable equipment being set up to record a band called The Filmstars for which I play guitar. More pictures of the theater as well as music from the band can be found at http://homepage.mac.com/thefilmstars.

Thanks in advance for posting my theater!