My Home Theatre comprises of the following:

I've tried to keep my Home theatre purchase simple and cost effective as I was restricted to a fairly tight budget. All the components where bought over several years of saving. I chose the Screenplay 5000 for brightness and sharpness over the Panasonic AE700. It was a tough decision between the two units. DLP projectors where out of the question as I am vulnerable to rainbow effects. The Dolby Digital amplifier was a low budget unit, I felt spending more money on speakers was a better way to go. Once I heard the Tannoy's, I knew these speakers were the right ones for me. The subwoofer was a kit I bought from Jaycar Electronics, It comprises of 2x 12" subwoofers (placement Isobaric) driven by the Playmaster amplifier 'configured in Bridge mode' which was also in kit form. The dynamic sound range this subwoofer brings to this sound system is incredible. Very happy chap. Before I go on with my home made screen, I want to mention my HTPC. A HTPC was a better choice for me than buying individual pieces of hardware, as it could play just about any video material and also record and view HDTV, all this for under a $1000. Connection to projector is via VGA, Amp via S/PDIF. It also simplified the amount of cables required to connect up the system.

Ok! Now back to the home made screen. This is my pride and joy as it was totally fabricated from materials bought from local Hardware, Electronic and Curtain stores. Because of my low budget and therefore could only buy a low end projector, I noticed that the blacks, although they appeared by perception blacker in the video area the horizontal bars always appeared slightly misty white in movies that used formats other than the 16:9. I decided to give it a go and see if I could build a motorised screen that can hide these horizontal bars by adjusting curtains via remote control. Following are the pictures of my project with simple explanations on how it was done.

Pic 1: Frame was made from Pine timber and mitered together. 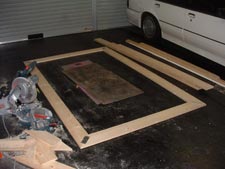 Pic 2: Another frame was then attached to the perimeter of the first frame to form a cavity about 7cm high to hide all the mechanics and electronics. 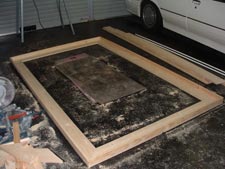 Pic 3: A frame identical to the first was then made and mounted with hinges on top, this can now be open-end with ease to make adjustments to the mechanics and/or electronics. 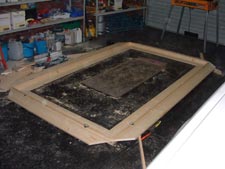 Pic 4: The screen was painted in matt black and mounted straight on to the plaster wall, which was also used as the actual screen painted in vivid matt white to keep costs down. 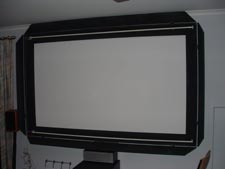 Pic 5: The curtains are driven up and down using geared down motors and lace rods. 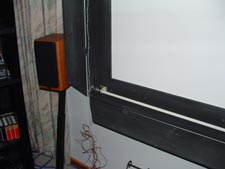 Pic 6: The top curtain was easy to lower and raise as a normal blind would operate. But the bottom curtain was a little more difficult to do. I used elastic bands on both sides of the screen, tensioned from the end of curtain to the top of the screen, This pulled the curtain up as the motor unwound the fabric from the lace rod. It's a little hard to see in the photo. 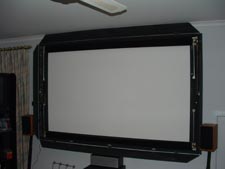 Pic 7: This shows the 8 channel infra red receiver pcb kit. I'm using 4 of the channels only, configured as 2 H-bridge circuits to drive the motors in both directions. I also placed some aluminum rods to guide the curtains and micro switches to disable the motors when the curtains reached there inward limit and home position. Sorry for the bad photo. 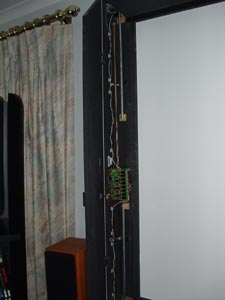 Pic 8: The screen finally finished and the curtains drawn to black out the horizontal bars. I used the flash so the curtains can be seen. I plan to paint the room in a dark colour at a later stage. 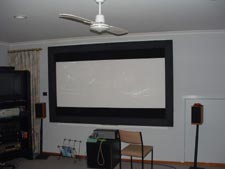 Pic 9a & 9b: These pics show the difference it makes with and without the curtains. You can really see the difference if you load the 2 pics in a picture viewer and switch quickly between the two. 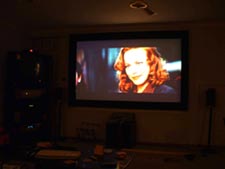 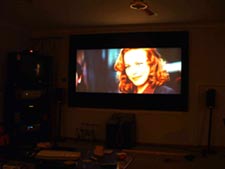 Pic 10: With the curtains retracted I can also watch 16:9 format movies. 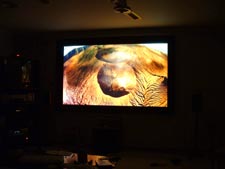 Good luck if you decide to make one, If you need more info email: junk100@optushome.com.au

Thanks to Projector Central for helping me make an informed decision on choosing the right projector for my application.