I thought I could offer a story with a slightly different slant on the home theatre projector systems.

We live in the UK and my girlfriend is an avid cinema goer. She sometimes visits the local cinema two or three times per week. My girlfriend is normally a very calm person except when she is in the cinema engrossed in the film and people sitting around her start talking, then she turns into "Miss Theatre rage". Several times during 2002 she came home from the cinema and spent more time complaining to me about people talking and spoiling her film experience than the film itself.

It was approaching her birthday last April when I decided that I would put an end to her cinema misery and buy her her very own home cinema system as a surprise. I knew nothing at all about home cinema/AV equipment so turned to the web for some advice whereupon I came across your wonderful website. I planned to install my purchase in our lounge which measures 11'6" x 16' long and for the room still to be used as a lounge as well as a home cinema area. After spending some considerable amount of time reading up (on the quiet), I set my total budget to Â£3500 and set off to my local AV dealer with some components in mind for a demonstration. (My girlfriend thought I had gone to the garage to get the car serviced!)

After the demonstration I ordered the following components:-

Cables Various from Maplin Electronics Â£ ? Made up own 10m component cable.

As you can see from above I had spent all my budget so as a temporary measure I decided that I would make a projector stand, some speaker stands and utilize our existing cheapo hifi rack. The long term intention was to ceiling mount the projector and build a bespoke rack for all the equipment.

My big plan was to install the whole system in a day while my girlfriend was at work so she would come home to a "Big Picture" surprise.

I regularly slip off into the garage to tinker about so it was not difficult for me to make a projector stand and some speaker stands undetected. 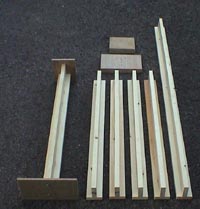 My local dealer called me about a week before the big day to say all the parts had arrived so I sneaked off while she was out somewhere and hid everything in the loft keeping my fingers crossed that she would not venture up there in the next few days.

My luck was in as my girlfriend was invited out straight from work on the eve of her birthday and it meant she wouldn't get home till about 10pm which gave me a longer day than I had expected.

The big day arrived and I waived her off to work at about 7:45am. 8:00am and I was off on a mission. I took this picture before I started: 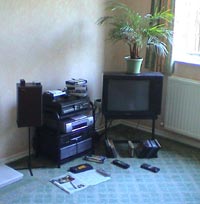 I stripped out the lounge and started by installing the speaker cables under the carpet and laid them all to the corner of the room. 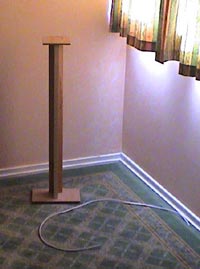 I then dived into the loft and heaved the pile of goodies into the lounge ready for assembly. 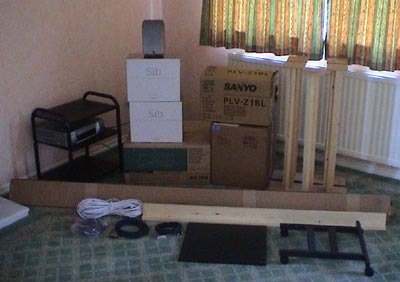 I started with the screen. Luck again was on my side - the beams ran across the room so I was able to screw some hooks up into it and with the aid of some cable ties, the screen was up in no time. 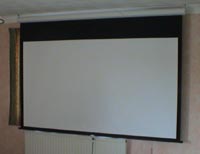 Next was to unpack and install the Sub. Placement was not ideal as the doors are in the corners of the room. 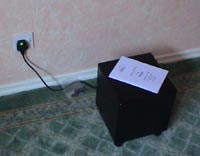 I then unpacked the rest of the equipment with the view to assembling it our old small hifi rack. I was struck with panic as it was by now getting on for tea time and I found the rack was narrower than the separates. I went into overdrive on the bodging front stripping down the rack and spacing the side out with some washers, panic over! The speakers, amp, video and DVD player were suitably connected up and all placed in the corner. 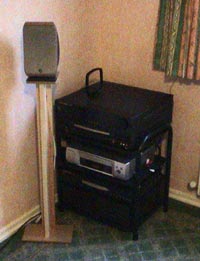 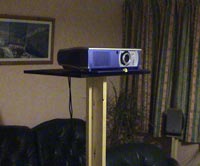 Time was getting on, it was about 8:30pm and I still had to finish off the top to the projector stand before I could connect up the projector, half an hour of sawing wood and screwing it together and I was ready for the final connection (Via S-video, hadn't had time to make up the component cables!). The stand was placed between two chairs about 11' from the screen and I was at last ready for the big switch on. I had to get everything working as I wasn't sure at what time my girlfriend was due home. I popped in Gladiator (One of my girlfriend's favourite films) and to my good fortune things were up and running OK.

There was one thing left to do before she got home....... tidy up all those boxes quick. 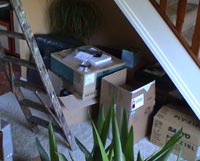 Well I'd made it, absolutely shattered I awaited her return home, I had left gladiator playing on the menu screen and shut the door to the lounge to keep the surprise.

When she walked in she recognised the music straight away and asked me if I'd been watching Gladiator. I replied not yet but shut yours eyes and come with me. I led her through to the lounge, sat her in the chair, pressed play and told her to open her eyes.

Well you can guess it had the desired effect she was speechless for all of twenty seconds, she sat there watching in awe with complete disbelief at the superb 92" picture on the wall at home with full surround sound. 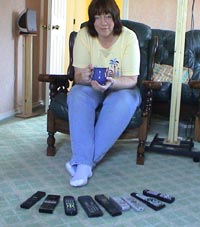 I had overlooked one thing. Now I had to teach her how to master all the remotes, she still asks me today what does what sometimes! Pronto...What??

It was a brilliant present we and our friends thoroughly enjoy our cinema nights. Over the last 10 months I have fine tuned things a bit at a more leisurely pace, we have added a freeview digital TV tuner, I built the corner rack system and I have recently ceiling mounted the projector with a home made bracket and have run the cabling under the bedroom floor. 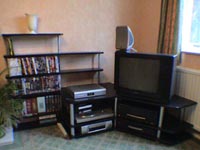 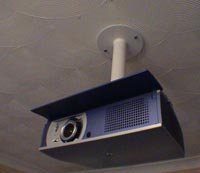 I hope your readers enjoy this story, I don't recommend anyone doing as I did in the day if they have a weak heart as it was a bit stressful!