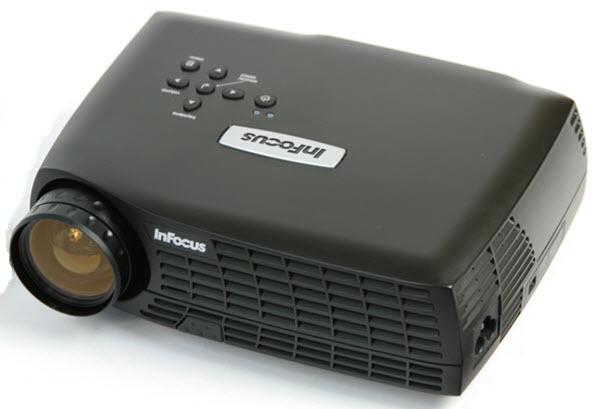 In a market saturated with mobile presentation projectors, there are two ways to be noticed: get brighter, or get lighter. The InFocus IN10 is one of the lightest projectors on the market, weighing only 2.4 pounds. This compact light cannon is rated at 1800 ANSI lumens of brightness, and at the same time is one of the few projectors that truly deserves the title of micro-portable. In addition to its high lumen output, it features a long lamp life, and comparatively quiet operation. Thus the IN10 is an excellent choice for traveling presenters who want to carry a lot of power in the smallest and lightest package possible.

Connection Panel: One M1-DA port, one S-Video port, one Composite video port, and one 1/8" audio input.

The IN10 is downright tiny, measuring only 2.5" by 7.8" by 6.1" and weighing a scant 2.4 pounds. When looking at the projector from the front, the lamp housing is off to the left side of the case, heat exhausts out of the front vents, and the power cable plugs in on the right. The connection panel is on the rear of the projector. 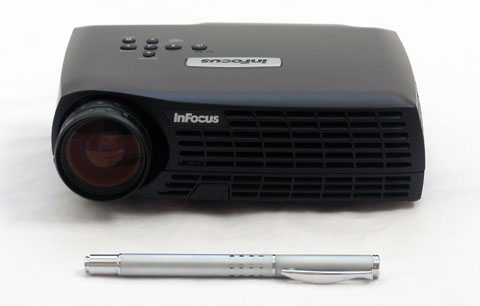 The connection panel consists of a composite jack, s-video, 1/8" audio-in, and an M1-DA port. An M1-DA cable can break out to component, DVI, or VGA, but you need the adapter cables first. The only one in the box with our test sample was a VGA breakout cable, but that's enough to handle most common usage. If you plan to use the IN10 to display video, you can use either the standard composite or S-video ports. Alternatively, you can use the M1-DA port, but to do this you'll need a component video or DVI breakout cable. These should not cost more than $20 each.

The name of the game is simplicity. The IN10 has no low lamp mode, a sparse menu system, and a six-button remote. It's meant to be a highly portable solution for XGA projection, and it accomplishes this very well. InFocus did not add a lot of unnecessary fluff to this machine - it's all business.

The projector is relatively quiet, and has a low, 125 watt lamp for minimal heat exhaust. Even in a small room, sitting more than three feet or so away from the projector is enough distance to avoid distraction. This is a major advance over earlier generation micro-portables, which made the user pay for the convenience of the small package with loud fan noise.

Despite the low-wattage lamp, our test unit was able to crank out 1584 ANSI lumens in "Presentation" mode. This is an exceptional amount of light for a projector this size - there are only four XGA projectors in production that combine 1800 ANSI lumens or more with a weight under 2.5lbs.

In some instances, the IN10 may put out more light than you need. There are several ways to reduce lumen output if you find that "Presentation" mode is too bright. Reducing white peaking can drastically cut lumen output - for example, using 50% white peaking brought light output down to 1115 lumens, while taking white peaking to 0 reduced it to 552 lumens. Using "Film" or "Video" mode brings light output to 700 or 684 ANSI lumens, respectively. These two modes have better color accuracy and contrast, which is useful when displaying data graphics, photos, or video.

Brightness uniformity on our test unit measured 83%, which means you won't see any hotspotting. During normal use, it's hard to notice any uneven illumination at all, which makes this a mark in the "plus" column for the IN10.

The remote control is the same that InFocus uses with several other data projectors, but it is too large for a projector this size. The remote only has six buttons - Power, Menu, Up, Down, Enter, and Source. It would have been nice to see digital zoom, a laser pointer, or USB page up/page down functionality on this projector, as these are features that exist on the competition.

The IN10 has very little throw offset - approximately 3% of the image height. If this projector is set on a conference table, it may need to be tilted upwards to let the image hit the screen properly. This results in a trapezoidal image, which necessitates keystone correction if you want to square it up. Keystone correction is handled well on the IN10, and even small text is still legible after keystone is adjusted. If you do want to use the keystone correction feature, it will not cause any significant decrease in image clarity unless you are displaying exceptionally small fonts.

Contrast is perfectly acceptable for presentation use. In a room with any degree of ambient light, contrast is going to take a significant hit, but the IN10's lumen output helps to compensate for this. If you were planning to use the IN10 in a secondary role as a video projector, be aware that contrast is not up to par with home theater projectors. For casual use, though, the IN10 gives satisfactory performance.

Comparison:
InFocus IN10 versus Boxlight TraveLight2

The IN10 is an attractive package on its own, but how does it stack up to the competition? Right now, there are few models available that compare to the IN10 in terms of weight and size, one of them being the Boxlight TraveLight2. We reviewed the TraveLight2 in May of this year, and it earned some of our highest scores.

Despite the fact that the Travelight2 is rated at 2100 ANSI lumens while the IN10 is 1800, we actually measured the IN10 as the brighter of the two, at 1584 lumens compared to the TraveLight2's 1400. In rooms with ambient light or large screens, the IN10 has a bit of an edge, but the difference between 1600 and 1400 lumens is not of great significance-you need a light meter to tell the difference.

The IN10 has full-sized s-video and composite video ports in addition to an M1-DA port. M1-DA, long a staple of InFocus projectors, is inconvenient only because InFocus does not include the DVI or Component breakout cables in the box. These adapters are inexpensive and can be found at many online retailers, though locating them in a retail store might prove difficult. The Boxlight TraveLight2's DVI-I port is easily as versatile as the M1-DA port on the IN10 with the added bonus that DVI cables are inexpensive and easy to find. The other ports on the TraveLight2 are replaced by 2.5mm micro-jacks, but the breakout cables are included.

As far as the lamps go, both projectors have lamps rated for 4,000 hours, and both vendors ask $399 for replacement lamps. The TraveLight2's lamp life can be extended to 5,000 hours by using eco-mode while the IN10 is fixed at 4,000 hours. However, even 4,000 hours is enough to deliver 2,000 two-hour presentations, so it is likely that many users will want to upgrade the projector itself long before having to replace the lamp.

The IN10 has a 1.3:1 zoom/focus lens, compared to the TraveLight2's 1.15:1. A zoom of 1.3x is the longest zoom range of any product in the sub-3 lb class. However, the TraveLight2 may have a more convenient throw offset for many situations, since the bottom edge of the image appears 15% of the image height above the centerline of the lens. The IN10 has a scant 3% offset, which might put the image too low on the wall.

At this writing, the IN10 is the less expensive of the two, with official prices at $1,249 compared to $1,399 for the TraveLight2. The IN10 is a bit brighter and has noticeably less fan noise. On the other hand, the TraveLight2 includes a more convenient throw angle and superior contrast. The IN10 offers conventional composite and S-video ports, whereas the Travelight2 uses a special jack for these inputs. Meanwhile, the IN10 uses an M1-DA port compared to the TraveLight2's more conventional DVI-I. If you plan to use the projector for the display of PowerPoint presentations, Excel spreadsheets, text documents, and the like, the IN10 is an excellent choice. If you plan to include a lot of photography or video material in the mix of your presentation material that would benefit from a higher contrast display it may be wise to consider the TraveLight2.

The InFocus IN10 is far from the first microportable projector, but it is arguably one of the best. With nearly 1600 real lumens, a 4,000 hour lamp, and quiet operation, the IN10 can be had for street prices around $1250. If you need tons of power in a tiny package, don't miss it.

For more detailed specifications and connections, check out our InFocus IN10 projector page.