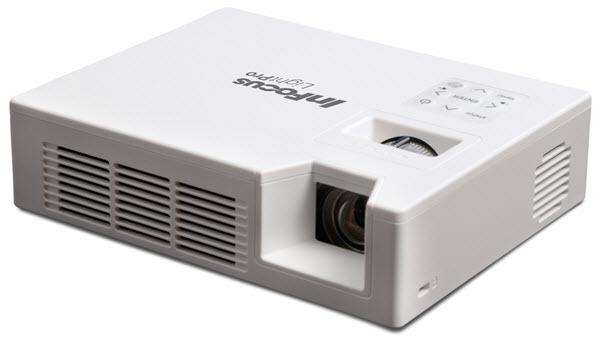 The new InFocus IN1146 is an ultraportable presentation projector that is packed to the gills with features. An LED light engine gives the projector quick start-up times and less heat exhaust. Extensive connectivity options make it a snap to present from a laptop, USB drive, SD card, or smart device. And with the optional WiFi adapter, presentation is as simple as pulling out your smartphone. With an MSRP of $649, the IN1146 is price-competitive and feature-rich, making it a great option for portable presentation.

The IN1146 starts up quickly, as is typical of LED projectors, and comes to full brightness right away. "Full brightness" on this projector means about 640 lumens in Brightest mode, which is an indication that it is not built for large conference rooms or even classrooms, but for small-screen, highly portable mobile presentation.

The IN1146's Brightest mode isn't much for color, but both PC and Movie modes produced balanced, well-saturated images. When viewing PowerPoint slide shows, graphics, or photographs, the IN1146 did a good job of rendering detail and shadows, though the latter is highly dependent on room lighting and even in a perfect environment there is some crushed detail. As a presentation projector, though, the IN1146 balances image quality with brightness and portability, and the trade-off here is worthwhile.

Coupled with the optional WiFi adapter, presentation on the IN1146 takes on a whole different dimension. By controlling the presentation from your smartphone, you can bypass limitations of remote range and cable length, making the whole presentation process much quicker and easier. The experience is so much better, in fact, that you should consider the purchase non-optional if you plan to do any presentations at all.

Portability. When you combine the 1.8-pound IN1146 with its 1-pound power adapter, you get a complete projector package that's less than three pounds and will easily fit in a briefcase or laptop bag. Throw in a USB stick or WiFi adapter and you have a complete presentation suite with no computer involved.

Connectivity. Aside from the LED light engine, the big draw of the IN1146 is connectivity. Despite its small size, the IN1146 includes a full-sized SD card slot, both HDMI and VGA ports, and a multifunction USB port. You can use the USB port for PC-free display by connecting a flash drive filled with documents and photos, or you can use it to connect an optional WiFi adapter.

WiFi. With the optional WiFi adapter, you can use your smartphone or tablet to display documents on the IN1146. The app is available on both iOS and Android platforms, and is compatible with most common image and office document formats (including both Microsoft Office and the less-common iWork formats from Apple's office suite). The adapter, made by Edimax, is available directly from InFocus and costs only $29.

LED light engine. Whether or not an LED light engine actually gives you 30,000 hours of use is, frankly, irrelevant. For presenters, LEDs have several distinct advantages. They eliminate the need to carry spare lamps. They give the projector a warm-up time of about five seconds rather than five minutes. They produce less heat, allowing projectors to get smaller and quieter. And since they are solid state, they are (in theory, at least) less prone to breakage if your projector gets bumped or jostled during the trip.

Stereo speakers. The IN1146 has a pair of tiny speakers built in, giving you an easy option for audio if you can't carry larger speakers or don't want to use the speakers on your laptop. These are especially helpful if you are projecting from a USB thumb drive or smartphone. The speakers themselves are far from powerful, and turning the volume up can result in tinny distorted sound, but it's far better than nothing at all.

Light output. Our test sample of the IN1146 produced 638 lumens in the appropriately-named Brightest mode. Brightest mode is useful if you need maximum light output, but color saturation is weak and the whole image picks up a greenish-yellow tinge. That's not a problem if you're displaying text documents or spreadsheets. For more colorful material, PC mode at 359 lumens has much better overall image balance. PC is our mode of choice for general presentation use such as PowerPoint slide shows, graphics, or photos. The IN1146 also includes Movie mode, which produces 308 lumens and improves black levels and color accuracy a bit more.

Contrast. The IN1146 has a black level that's nothing to write home about, although a completely black pattern does give it a boost thanks to the ability of LEDs to turn themselves completely off when needed. However, in real-world use, ambient light in a room has a much greater impact on image dynamic range than the projector's theoretical maximum black. To ensure a high-contrast, dynamic picture, keep image sizes to 40" - 60" diagonal in ambient light, and no more than 80" diagonal in a darkened room. Anything bigger than that and you're flirting with a washed-out picture.

Color. The IN1146's PC and Movie modes do a good job of reproducing color reasonably well, and are suitable for use with photos, video, graphics, and other color-intensive applications. Brightest mode should be reserved for black-and-white content, as it reduces color brightness and saturation significantly.

Sharpness and clarity. Due to the IN1146's use of diamond-shaped pixels, documents with a lot of small text can be difficult to read. Especially troublesome are spreadsheets, where the horizontal and vertical lines are interpolated across two rows or columns of pixels, respectively. On the other hand, this interpolation does not have much effect on the fidelity of photos, PowerPoint slideshows, or video, and using those types of content the IN1146 produces a nicely detailed image.

Light output. The IN1146 is rated at 1,000 lumens, but our test sample had a maximum output of only 638 lumens. That's still enough for small-scale presentation, but the lumen shortfall is certainly something to be aware of. If you need a projector that will actually deliver all 1,000 lumens, you should consider other options.

Power brick. As with many other ultraportable projectors, the IN1146's 1.8 pound weight spec is deceptive. It's true that the projector weighs less than two pounds, but that's because the projector has an external power supply. The power brick weighs an additional pound. The cable is only about six feet long, so an extension cord would be a good addition to your travel bag. The projector is still a very compact package, but no more so than other ultraportables.

Diamond pixels. By mounting the DLP chip on an angle, projectors like the IN1146 can be made smaller and thinner. However, this also means that pixels are diamond-shaped rather than square, with corners pointing up. This also means that all input signals, regardless of resolution, are scaled. The projector effectively has no native resolution, so it's not a good choice for any content requiring perfect 1:1 pixel matching or super-high sharpness.

Remote. The IN1146's tiny, credit card sized remote control is sometimes difficult to use, and its domed buttons have poor tactile feedback. Adding to the frustration is the projector's lack of a forward-facing IR receiver. If you are at the front of a room giving a presentation using the onboard media player, it can be very difficult to get the projector to see your button presses. To top things off, the remote control uses a button-style CR2025 battery, which can be difficult to find in stores -- and no battery is included with the projector.

Placement flexibility. The IN1146 has no zoom, so the only way to adjust image size is by physically moving the projector. Since the IN1146 has low light output compared to other ultraportables, smaller screen sizes are preferred to keep the image from washing out. If you need to put the projector somewhere other than the conference table, remember that it has a tripod socket in its base.

Ultraportable projectors fill a very specific niche. They are smaller and lighter than traditional portables (which tend to be between 3 and 5 pounds), but offer less light output. But they are larger than pico projectors, which are battery-powered and pocket-sized. Ultraportables are a logical compromise between brightness and weight, giving road warriors something heftier than a pocket projector that will still fit in their briefcase.

The InFocus IN1146 takes this philosophy to heart. It combines adequate brightness, small size, and connectivity with an instant-on, hassle-free LED light engine to create a projector that's powerful enough to get the job done. The ability to project from your smartphone or other device makes presenting easier than ever while also cutting down on weight and clutter. Good things come in small packages.

For more detailed specifications and connections, check out our InFocus IN1146 projector page.

There was an error in our database. We're correcting it now.