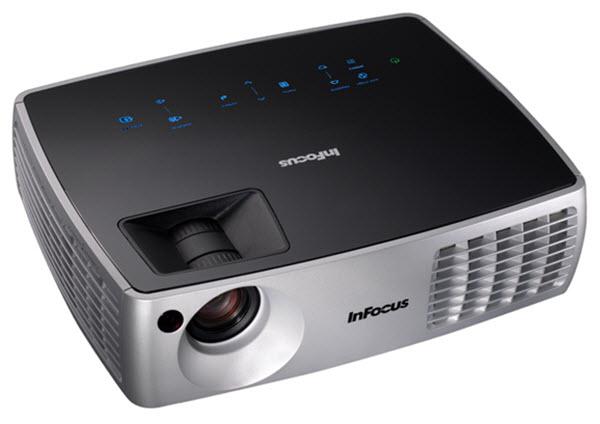 InFocus's IN3108 is a 3500-lumen, 7-pound WXGA DLP projector that doesn't have a lot of surprises. It is a good, solid, dependable projector that creates a balanced image. The extra features are a little on the sparse side, and some traditional favorites are missing - like wired networking and mouse control for the attached computer. However, it also picks up some new features, like an HDMI port for video and a DisplayLink connection for easy, quick startups. For the educator who cares about image quality above all else, the IN3108 is a solid performer.

High lumen output. We measured a real-world maximum lumen output of 2600 lumens on our test unit. Though this fell short of its 3500 lumen spec, 2600 lumens is enough light to power up to a 100" diagonal screen with a significant amount of ambient light. This is especially helpful when your students are taking notes and you don't necessarily want to dim the lights in the room. Low lamp mode drops lumen output by 16% in all modes, so running the projector in eco-mode for the extra lamp life does not require much of a sacrifice.

Of course, 2600 lumens may be too much light in some circumstances. In these cases, you'll want to adjust the projector's White Peaking, which is a function of the onboard BrilliantColor system. Changing this setting drastically reduces lumen output, and also results in a more balanced image. With BrilliantColor set to 50%, light output dropped from 2600 to 1490 lumens; when turned completely off it plummeted to 775 lumens. If you have a smaller screen or better light control, these settings will be useful. WXGA Resolution. WXGA resolution is unmatched for its combination of low cost and high versatility. The IN3108 can natively display standard computer resolutions of 1024x768 XGA, 1280x768 and 1280x800 WXGA, as well as 1280x720 high definition video. This allows for great versatility and minimizes the need for image compression.

DisplayLink. DisplayLink is a technology that allows someone with a Windows PC to use a USB connection for video. So far, the technology is limited to use on Windows computers, due to required software which has not been ported to Mac OS X or Linux operating systems. On Windows, though, you plug a USB cable into your PC, plug the other end into your projector, and the software will take care of the rest. No video or audio cables are required. This is especially useful on a rolling cart, where a teacher might want to use his or her own laptop or classroom computer with as little fuss as possible.

Monitor Passthrough. The IN3108 also has a VGA monitor passthrough, so users without a laptop (or without a desktop containing a second video card) will still be able to see an image on their monitors while using the projector. A special note, though, is that monitor passthrough is unnecessary when using DisplayLink - it will automatically display on both monitors.

Dual 3W speakers. The IN3108's onboard sound is very good, with 3.0W stereo speakers. This is one of the first classroom projectors we've looked at with stereo speakers onboard, and they do make a difference. The speakers are less tinny than some of the other sound systems we've tested, but are still capable of good volume that can be heard clear across the classroom. Still, it lacks the bass response typical of installation speakers, and should not be considered a substitute for an installed speaker system.

Security. The IN3108 has the ubiquitous Kensington lock point as well as a PIN system. Once enabled, it requires that a password be input before the projector will display an image. There is no recovery system, so guard your password well - if you lose it, you'll need to call InFocus customer service to reset the projector.

Standard lamp life; expensive lamp replacements. The IN3108 has a specified lamp life of 2,000 hours in its brightest mode and 3,000 hours in eco-mode. This is considered "standard," though there are now several classroom projectors with lamp life extending into the 4,000-to-6,000-hour range. Moreover, replacement lamps cost $499, which is higher than the average price of $300 to $400 we find on many competing models. In a school district where multiple projectors will be deployed, the difference between $300 and $500 for replacement lamps may be of significant consequence.

No onboard networking. Most education projectors have an RJ45 networking port, allowing them to be controlled and monitored over a school's existing network. The IN3108 lacks this port. Network ports are most important for projectors that will be mounted permanently, since they can be permanently linked to the network. Projectors on rolling carts are usually not in the same location for long enough to hook them into a network.

The IN3108 does include the 12V connection necessary to use a LiteShow II wireless connector, but it is not included. This device will enable wireless network monitoring and presentation, but costs an additional $249 on top of the cost of the projector.

No mouse functionality. Many education and presentation projectors give the user the ability to connect their computer to the projector via USB, allowing the mouse to be controlled from the remote control. This allows a teacher to move around the room while lecturing, rather than being tethered at the desk. The IN3108 lacks this ability over all connections except DisplayLink, which uses a USB connection in the first place. Even so, the remote only allows for page up/page down functionality, which is not as useful as full mouse control.

Dynamic Messaging System (DMS). The IN3108 includes InFocus's Dynamic Messaging System, or DMS, which allows messages to be displayed either system-wide or on specific projectors. The caveat, though, is that the projectors must be networked first - and the IN3108 does not have any onboard networking. So this feature requires the DisplayLink adapter before it's available in any capacity.

InFocus's IN3108 has a little bit of everything. This classroom projector is ideal for use in rooms with poor light control due to its impressive brightness. DisplayLink technology allows for fast connections, and the optional LiteShow II brings wireless network connectivity and projection to the table. However, some common features on rolling cart projectors, like a slot for a security cable, are missing. When using it in a ceiling mount, the top-change lamp and filter-free design make maintenance a breeze, but the lack of wired networking means an extra $249 per projector to enable network monitoring and projection. With retail prices around $1999, it is not the most affordable of the classroom projectors we've looked at, but it is a solid performer. However, if you are buying for schools you probably won't have to pay that price. Talk to InFocus dealers about volume discounts for educational institutions.

For more detailed specifications and connections, check out our InFocus IN3108 projector page.