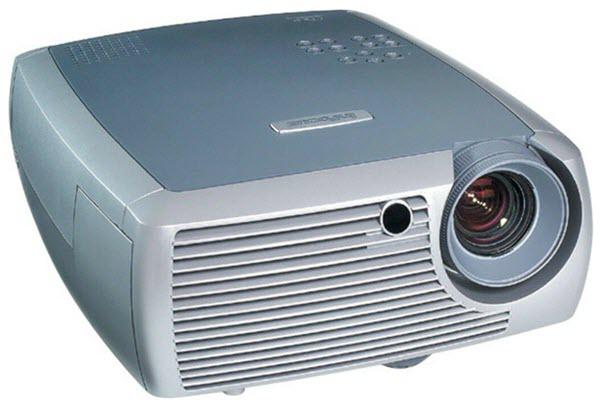 We have never been particularly enthused about standard SVGA resolution projectors for home theater. LCD technology produces too much pixelation, and the SVGA-resolution DLP products have been designed primarily for low-cost mobile presentation use. Video was not up to snuff, fan noise was excessive. Nothing was quite right about them when it came to home theater.

We have an update for you. The InFocus X1 (also sold as Dukane ImagePro 7100HC with a 5 year warranty) has just changed the ballgame. With a current street price of just $1,599, the X1 offers what is in our opinion the finest video performance yet in the sub-$2,000 price class. Priced significantly less than digital rear-projection big screen televisions, this HDTV projector has the power to establish front projection TV as a real alternative in the mass consumer market. Do you want a 55" digital television for $2500, or a much larger picture on your wall for just $1,599?

The simple economics of the situation will stimulate consumers who have never considered anything other than a television to think twice. Time was when projectors were for the rich, and the typical consumer had to stay with television. With the X1, the question will be "can you afford not to go front projection?"

The focus of this review is the home theater application. But InFocus has designed the X1 to be a truly "multi-purpose" projector. Yes, its superb video makes it a great home theater projector. But it is a fully featured data projector as well for office and mobile presentation use. And its low price and monitor loop-through feature will make it especially attractive to the education market as well.

The InFocus X1 is a standard SVGA resolution (800x600) projector that incorporates the latest 0.55" DLP chip from Texas Instruments. It is rated at a maximum of 1000 ANSI lumens of brightness and 2000:1 contrast, and features Faroudja DCDi video processing technology.

The X1 is compact, weighing just 6.8 lbs. So it is easy to set up either as a coffee table projector for occasional use, or as a permanently ceiling mounted unit. The silver casework has a simple, understated design. There is nothing pretentious or flashy about it. It's just a good looking, no nonsense projector.

The connector panel features a single VGA port through which you may feed either computer SVGA or XGA signals, as well as HDTV 1080i, 720p, and component 480p. There is a special seven-pin S-video port that is a bit different than you find on most projectors. You can use it as a regular S-video input, but it can also be used as a component video (480i) input as well by using a special cable adaptor that comes with the unit. It is not particularly clear in the manual, but the S-video/component port does not recognize component 480p, and conversely, the VGA port does not recognize component 480i. So you need to make sure to feed these signals into the appropriate ports.

The connector panel also offers an RCA composite jack, an audio jack for the single 2.5-watt speaker on board, a USB port, and VGA 15-pin monitor loop-through.

The X1 has a 1.2x manual zoom/focus lens. Throw distance on this product is about average for portable machines. A 100" diagonal 16:9 format image can be produced from a distance of about 16 feet. That means the unit will be behind the viewers when they are positioned at a viewing distance of 2x the screen width or less.

The X1 not only starts out costing very little, but it has a 3000-hour lamp in it as well. Most projectors in this class have 2000-hour lamps or less. So the extended lamp life will offer the owner a lower cost of ownership over the life of the unit.

The menu is straightforward and easy to navigate. Picture controls include keystone adjustments (if needed), contrast, brightness, color, tint, and sharpness. There are three factory preset calibrations, one each for presentation, film, and video sources. Each of these can be further modified and saved as the user sees fit. In addition to the three presets, there are three user programmable memories, giving a total of six different calibration settings that can be defined and recalled by the user.

There are three predefined color temperature options to select from on the menu: cool, warm, and warmest. Oddly enough on our test unit, these names did not correlate to the actual settings..."cool" was in reality the warmest setting, "warm" was the coolest, and "warmest" was the middle of the three. This is of no real consequence. You can flip through them and easily see the effect on the picture and select the setting you prefer. But InFocus will probably correct the software on units not yet shipped, so you may not even see this little programming error in the unit you end up with.

The X1's fan noise is low to moderate in volume, low in pitch, and unobtrusive. It sat directly behind us during the evaluation, and we were not aware of the fan at all. However, once the unit is powered down, the fan continues to run very slowly to cool the power supply. This produces a very low but audible hum in an otherwise quiet room. Thus if the X1 is installed in a room that you also want to use for quiet activities like reading or sleeping, you will want to install it such that you can cut main power to the unit in order to shut it off completely.

The first impression created by the X1 is "wow, that is an amazing picture for the money." Simply put, we've never seen a picture of this quality for anywhere near the price tag of $1600. Thus it is a projector that is easy to get genuinely enthused about.

Contrast and color saturation are two of the X1's strongest assets. In film mode, color is natural and well-balanced, with no obvious errors. Videophiles will prefer this mode of operation to obtain a balanced image. In presentation mode, you gain some visible brightness of the image. But you sacrifice color accuracy, and you lose a lot of detail in blocked up highlights. Initially presentation mode gives the impression of having more sparkle, but it is ultimately not as satisfying as a video experience.

The DLP technology used in the X1 delivers a smooth seamless image, despite its SVGA resolution. At viewing distances of less that 2x the screen width there is some subtle pixelation that is evident primarily in text, credits, and subtitles.

Due to the X1's comparatively low light output in film mode, the ideal screen size for home theater use is in the range of 80" to 90" diagonal in 16:9 format. You can easily go larger than that. But we recommend that you resist the temptation to go too big with this projector. The smaller image size concentrates the light, increases contrast and opens up shadow details, and you end up with a truly gorgeous picture. It also reduces what pixelation there might be and increases the apparent smoothness of the image.

Nevertheless, we used the X1 for a number of hours on our 100" 16:9 Stewart Grayhawk screen with impressive results. The high contrast screen helps you go larger with less image deterioration. But few buyers of the X1 will want to spring for a screen that costs as much as the projector.

The X1 is an entry level product for the first time user of front projection systems. So consider a less expensive matte white screen from Da-lite or Draper. Or even use a plain white wall for now if you need to, and upgrade to a good quality screen as your funds allow.

On the subject of rainbow artifacts, keep in mind that this unit has a 2x color wheel. Therefore, those individuals who may be sensitive to DLP rainbow effects will see them on this unit. Whether you will be able to detect rainbows, and if you can, whether they will be a distraction that inhibits your ability to enjoy the image, cannot be predicted. Some people can see them, and most people cannot. If you have experienced earlier DLP products and had no problem, you won't have a problem with the X1 either.

On the X1, onboard scaling is also an impressive feature. The detail definition that is lost on the X1 is lost due to the inherent limitation of the SVGA display, not any defect in the scaling. And even the rescaling for keystone adjustment is amazingly clean. We normally recommend that users avoid the use of digital keystone adjustment since it often compromises the image quality. But on the X1 we saw no discernable degradation of either DVD or HDTV image quality with keystone adjustments activated. That is remarkable on any projector, but particularly so on a product in this price class.

Speaking of HDTV, the X1's rendering of 1080i is a thing of beauty. Not enough resolution here to do justice to HDTV you think? Think again. All we could do is look at the X1's surprisingly clean image, shake our heads, and ask, "How much is this thing again?"

Normally we would insert a competitive analysis at this point, comparing the X1 to products that are its closest competitors. We will do so when we have more stick time with some of the new widescreen LCD products that are coming in below $2,000. But at this point we can say that the InFocus X1 is in a class by itself. It represents incredible projection value for the money. And at the moment, Infocus is sweetening the pot just a little more...if you register your purchase online at InFocus' website, you get three additional years of warranty added to the two that already come with it.

So let's see now. Amazing picture quality, a price of $1,599, a 3000-hour lamp, a 5-year warranty (until March 31). Frankly, we would be remiss in our duty if we did not give this gem our highest recommendation. The X1 sets a price/performance standard against which all other economy-class competitors will be measured in the months to come. If $1600 is your budget for a projector, buy the X1.

For more detailed specifications and connections, check out our InFocus X1 projector page.