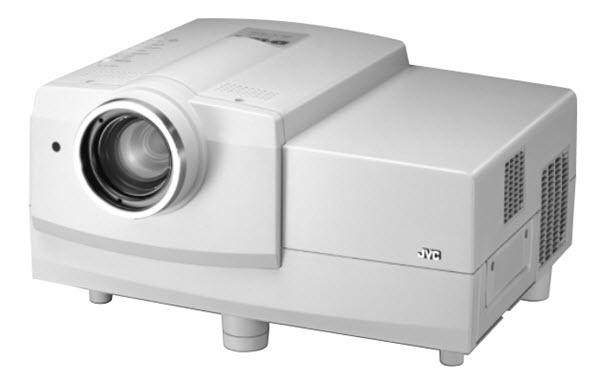 If you've followed the rapid developments in digital technology for home theater projectors, you are already familiar with the LCD vs. DLP debate. Some of the most popular home theater machines such as the Sony VPL-VW10HT and the Sharp XV-DW100U use LCD technology. Others, notably the Davis/DreamVision machines, use Texas Instruments' DLP chips. Both technologies have unique advantages and both are very good. But neither technology at its current state of the art is truly ideal for top quality video projection-at least as packaged in systems within the price reach of most consumers.

However, there is a third digital technology developed by JVC that offers significant advantages over both LCD and DLP. JVC's D-ILA (Direct-Drive Image Light Amplifier) technology uses LCD material, but the device is reflective rather than transmissive. In an odd way it's kind of a hybrid using concepts found in both transmissive LCD and reflective DLP light engines. In terms of picture quality, it ends up delivering the best of both...the excellent color control of the LCD and the superior contrast and minimal pixel structure of the DLP.

The D-ILA technology is not as well known for several reasons. First, D-ILA projectors have until recently cost $10,000, $15,000, and up-off the radar screen for most home theater enthusiasts. Furthermore, once consumers are into that budget range, they are often persuaded by home theater specialty dealers to go the CRT route. Finally, JVC as a research and development company has traditionally been rather weak at marketing. The big marketing guns at Sony, Sharp, and Texas Instrument ensure that LCD and DLP get all the press. Comparatively, JVC's marketing efforts have been down in the noise level.

One thing was needed to change all that. What JVC needed was a D-ILA based projector that could be bought on the street for at an affordable price--a projector that could go head-to-head with something like Sony's hot VPL-VW10HT in the same price range and win. And JVC's DLA-G11 is just that projector. It is the first D-ILA based projection system that is street-priced within the reach of many home theater buyers. Suddenly, Sony and Sharp have some very serious competition in this product category.

The DLA-G11 is rated at 1000 ANSI lumens, same as the Sony VW10HT and the Sharp DW100U. However, the big difference other than the D-ILA technology is that the G11 is an SXGA-class machine. The native display format is 1,365 x 1,024. That is SXGA vertical resolution extended horizontally to accommodate a 4:3 aspect ratio. So it uses 1.4 million pixels to produce a 4:3 image. By comparison, the Sony and Sharp use 786,000 pixels to make the same 4:3 image. Bottom line: pixels are visible on the Sony and Sharp machines, and invisible on the G11. It is really that cut and dried.

The G11's three 0.9" D-ILA chips are illuminated by a 420-watt Xenon lamp. The good news is that the lamp produces a solid, even white light that remains stable and bright over its lifespan. As a matter of fact, the lamp in our review unit had over 500 hours on it. JVC is the first vendor ever to submit a review unit to us with anything other than a new lamp. That speaks volumes. The unique Xenon lamp contributes significantly to the projector's spectacular image quality and stability.

The bad news is that the lamp's lifespan is 1000 hours, and replacements will set you back about $800. That might sound like a lot until you compare it to the cost of maintaining and re-tubing a CRT projector. When you run those numbers, suddenly the $800 doesn't look quite so bad after all. Either way, you pay to get the best video quality possible.

The Sony and Sharp units have 2000-hour lamps, and replacement cost is about half that of the G11. So the G11's total lamp cost over the life of the system is four times that of its competitors. Therefore you need to factor that into your economic model when sorting out which of these projectors to buy.

The G11 connector panel includes a variety of RGB/video inputs: a 15-pin D-sub, a set of five BNC's, S-video, composite, and inputs for component and HDTV. In addition there is a PC monitor loop-through, RS232C, and stereo audio. The projector has two one-watt speakers built-in which you may feel free to ignore.

The G11's 420-watt lamp throws off a lot of heat. It will easily raise ambient temperatures in a small home theater to an uncomfortable degree unless you have adequate ventilation. Also, the big lamp requires a big fan to keep it cool. So fan noise is a significant issue that needs to be dealt with during installation. You will need to install the G11 in a hush box or behind a false wall to isolate the unit from the theater itself. And no matter how you install it, you must take care to give the unit adequate heat dissipation or you will fry it. Simple as that. The G11 is a different beast entirely than the Sony VW10HT which is whisper quiet and relatively cool, and can be easily ceiling mounted with no muss or fuss.

Is the installation effort really worth it?

Well...it all depends. How much are you spending to get a terrific quality signal? How important is it to you to have the best possible picture quality for the money? Keep in mind that if you put garbage into the G11 you will get garbage out. Don't expect to slap a bad tape into your $200 VCR and have the G11 compensate for the poor signal. It won't happen.

On the other hand, the better your signal gets, the more outstanding the performance of the G11 becomes. And when you upgrade to a clean HDTV signal or a superb DVD signal from top quality players such as Denon's DVD-2800, the G11 will produce a jaw-dropping image that cannot be matched by any LCD or DLP projector anywhere near its price range. You will see details that the Sony or Sharp projectors simply cannot reproduce. You will see sparkling contrast that blows the LCDs away. You will see excellent color balance and saturation. And you will see it all with absolutely no pixel structure whatsoever. Period.

So if you are looking for the best picture possible, and you have good HDTV sources and/or top quality video processing equipment and DVD players, the G11 will transfer every ounce of information in those signals onto your screen. Handling clean, content-rich signals is where the G11 shines. With high quality sources, the G11 totally smokes the Sony VW10HT and the Sharp DW100U. There is simply no contest.

Of course you pay a little extra for the G11's image quality in lamp replacements, and it the cost to install it properly. But if you are up for that, you will have the makings of a truly first class home theater that has heretofore not been available in this price range.

For more detailed specifications and connections, check out our JVC DLA-G11U projector page.