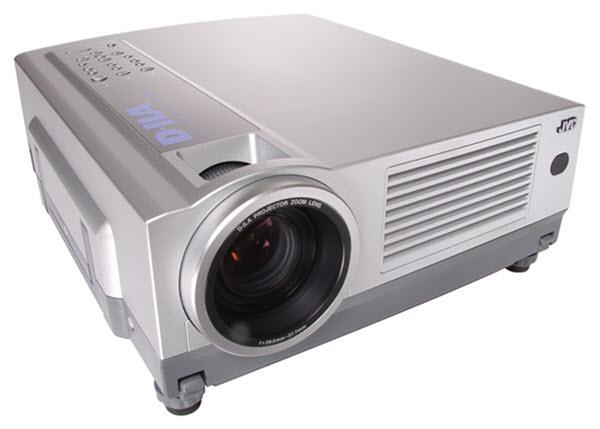 JVC's newest LCOS projector, the DLA-SX21U, finally began shipping in volume last month. This projector is also being marketed by Dukane as the Dukane 9017. After a sparkling debut at CEDIA last September that left everyone with eager anticipation, we were anxious to get it in for a test drive. And we are happy to report that the wait was worth it. JVC's SX21 and the Dukane 9017 will clearly be a formidable competitor in the under $10,000 price class.

The SX21 is based on JVC's unique version of LCOS technology known as D-ILA, or Direct-drive Image Light Amplifier. It is a reflective technology that is somewhat of a hybrid between LCD and DLP. LCD crystals are applied to a reflective surface and as they open and close they allow light either to be reflected or blocked.

The SX21 uses three very high resolution D-ILA panels, one each for red, green, and blue. The physical pixel matrix is 1400 x 1050, which is a native 4:3 format. A 16:9 image is produced using a matrix of 1400 x 788. That's about 27% more pixels than are used by the competing Mustang/HD2 DLP (1280x720) machines currently selling in the same general price range. Since there is a separate chip for each color channel, there is no color wheel used in this (or any) LCOS based projector. So those who are sensitive to DLP rainbow artifacts will be happy to know that they do not exist on this unit.

The SX21 is the most compact of the D-ILA projectors yet produced by JVC. It weighs just 13 lbs. and has a carrying handle that folds into the casework and disappears when not in use, making the SX21 a truly portable machine.

The manual zoom and focus lens has a moderate throw distance. A 100" diagonal 4:3 screen can be filled from a throw distance of about 12 to 16 feet.

The connection panel offers one 15-pin VGA, one DVI-D, one set of five BNCs, one S-video, and one composite video jack. There is also one audio input, a DC trigger, and a set of RS-232C's, one in and one out.

The JVC DLA-SX21U is all about color-perhaps the most natural color ever achieved on a digital projector in this price range. Color is highly accurate, and color saturation is superb. Highly saturated scenes like those in Moulin Rouge explode on the screen. However, the true strength of the SX21's color processing is best demonstrated in muted, low saturation scenes.

Think about a beach on a foggy day-the sky is a palette of grays, the water is darker shades of gray, the waves are white, the sand is a soft light beige, driftwood is varying shades of dark browns, and vegetation is dark green without high contrast. Most projectors will render a scene like this in rather monochromatic tones. But the SX21 is able to render this array of soft hues in truly astonishing realism.

In addition to color, another obvious advantage of the SX21 is pixelation-there isn't any. Pixels are so dense and tightly packed that there simply is no visible pixel structure even at close viewing distances. It outperforms even the Mustang/HD2 DLP chip in this regard.

The SX21 throws a full screen native 4:3 image with about 90% of the image above the centerline of the lens, and 10% below it. A vertical lens shift function would have been handy to give the user more latitude in installation, but the unit does not have it. Thus when ceiling mounting this projector, keep in mind that you either need to drop it a sufficient distance from the ceiling to keep the top edge of the image away from the ceiling, or tilt the projector downward slightly.

If you tilt it, you have two options. Either live with a small trapezoidal distortion and leave keystone adjustment set to zero, or use the keystone adjustment to square it up. If the tilt is slight, the first option is probably the better choice. Using the keystone adjustment softens the picture but only in a subtle way-unless you were doing an A/B visual test you'd have a very hard time telling whether keystone rescaling was active or not. Nevertheless, to a videophile even the mere knowledge that a keystone adjustment is active, regardless of how subtle the effect might be, is often enough to create dissatisfaction. So each individual installation will have its own "best solution" amongst these trade-offs.

Contrast performance has always been the most evident weakness of LCOS technology. LCOS machines do not have the contrast that DLP products can deliver. However, the SX21, rated at 800:1, is the highest contrast LCOS machine we've seen to date. And its contrast performance is plenty sufficient to give most viewing material a quite pleasing snap and sparkle. There are certainly low-light scenes in which you'd prefer to see more image definition. And source material that is inherently low in contrast is not helped much by the SX21.

Fan noise has always been an issue with JVC machines in particular due to their use of very hot 420-watt Xenon lamps that require a lot of cooling. Not only did these machines produce a lot of heat and fan noise, but the lamps lasted only 1000 hours. On the SX21, JVC has switched to a much cooler 250W UHP lamp with a life of 2000 hours. Fan noise on this unit is substantially reduced from previous models. We'd describe it as low to moderate in volume, low in pitch, and generally comparable to other units in its price class like the InFocus Screenplay 7200. Though it is not silent, many users will be quite comfortable using the SX21 without any hush box or sound damping accoutrements.

In terms of brightness uniformity, the SX21 produced the best performance we've ever seen in the lab, measuring virtually 100% in evenness of illumination from edge to edge. There are certainly no hotspots to be concerned about here.

Ideal set-up. This is a personal judgement call, but if I were setting up the SX21 in my own theater, I would use a 4:3 screen with electric masking on the top and bottom. Electric masking is a feature you can get with a screen that lets you open and close black fabric panels to adjust the screen's aspect ratio to the material you are viewing. At its most open position, the screen is 4:3, and you get the largest image possible. When you want to watch something in 16:9, you activate the masks, and black panels close from the top and bottom edge of the screen until the exposed portion of the screen is 16:9. The advantage is that you get a solid black frame fitted precisely around the image you are viewing. Black bars above and below the image which are visible on an 800:1 contrast projector are eliminated. That solid black frame enhances the viewing experience substantially.

Electric masking systems add significantly to the cost of the screen. So for projectors under $5,000 it is difficult to recommend electric masking since (depending on size) the screen might end up costing as much as the projector. However, the SX21 is a high performance product selling upwards of $10,000. It will be purchased by discriminating videophiles who are particularly interested in outstanding color performance and the best possible video quality. Thus it is a projector that will benefit handsomely from the incremental investment in a high quality electric masking system. Owners of the SX21 are precisely those most likely to appreciate the results.

How does the SX21 stack up against the InFocus Screenplay 7200, which currently carries a similar retail price? Which is the better value?

This is a question of trade-offs and personal taste. The SX21 surpasses the 7200 in color dynamics, image smoothness and stability, and that elusive amorphous characteristic we call natural film-like quality. On the other hand the 7200 is clearly the better performer in terms of contrast. Side by side it is quite obvious that each projector has an advantage over the other, and each has a weakness. Which is more important to you?

I can attest only to my personal preferences after seeing these units together. I believe strongly in the importance of contrast as a vital element in a satisfying image. And looking at the 7200 I can only wish the SX21 had the 7200's capabilities in shadow detail and overall contrast.

Furthermore, without the side by side comparison, the color on the 7200 looks outstanding. There are no glaring errors in color decoding, and the eye/brain combination easily compensates for variations in color temperature and small imperfections in color accuracy. Also the high contrast of the 7200 contributes to a perception of high color saturation. All things considered, the viewing experience is exceptional which is why we've got this unit on our Highly Recommended list.

However, with the SX21 one sees a beautifully natural image in which both saturated and muted colors are rendered with an elegance and balance that the 7200 cannot achieve. It has a quality that is hard to describe, but one which the discriminating videophile will recognize as rare in the world of digital projectors. For what it is worth, I sat down last Sunday to watch Lord of the Rings in its entirety for the first time, for my own personal pleasure. I had both the InFocus 7200 and the JVC SX21 on hand. Based on my evaluation of these units in recent weeks, my preference was for the SX21. Others who appreciate the dramatic visual impact of high contrast over color may quite legitimately have made a choice for the 7200. There are no right answers here.

We believe JVC has delivered a beautiful product in the SX21. With improvements in contrast, lamp life, fan noise, and color processing, this is overall the most satisfying D-ILA projector we've seen to date. It is an outstanding value for the money, and a formidable competitor to the Mustang/HD2 DLP machines in its same price range. Thus we are pleased as of today to include the JVC DLA-SX21U on our list of Highly Recommended home theater products.

This product is also sold by Dukane as the Dukane 9017. The only difference is that Dukane offers a 5-year warranty, whereas the JVC warranty is three years. As of this date, the Dukane 9017 edition is also added to the Highly Recommended list.

For more detailed specifications and connections, check out our JVC DLA-SX21U projector page.