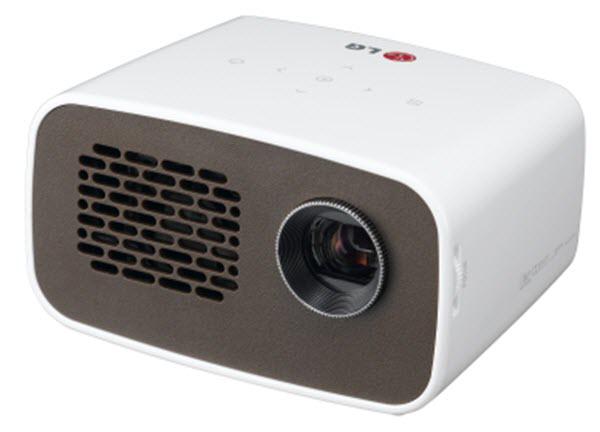 The LG PH300 "Minibeam" is a tiny portable projector with an appropriate nickname. Its native 720p resolution makes it better than other ultra-portable projectors when it comes to detail and resolution, while its onboard battery makes it an easy projector to take along with you. The LED light source means you'll never have to replace a burned-out lamp, and also means the internal battery will last for an impressive 2.5 hours on a single charge. If you need a super-portable projector that's capable of going anywhere, including places without electricity, the PH300 might be just the projector for you.

1280x720 High Definition. The PH300 is built with entertainment in mind. First and foremost, it uses a native resolution of 1280x720, which is both high-definition and uses the common 16:9 aspect ratio. This is ideal for television, movies, games, and other film and video content. Presentation projectors tend to use the 16:10 aspect ratio, which is more common among laptops and other computers but adds pixels that don't ever get used for video.

Truly tiny. The PH300 is a tiny projector that's easy to bring along anywhere you want to go. That claim gets tossed around a lot, but the PH300 lives up to it in a way the others don't. The case is only 2.5" x 3.5" x 4.5", about the same size as a fat paperback book. It weighs less than 1 pound, and unlike most portables you don't need to lug along a heavy power brick every time you want to use the projector - the bare projector is a viable option all by itself.

Built-in battery. The PH300's internal battery is arguably the projector's most unique feature, allowing you to use it anywhere you go regardless of whether or not a wall outlet is available. The manufacturer's specifications state that the battery should last for 2.5 hours from a full charge; during our testing, we were usually able to watch a feature-length movie before running out of juice. To give yourself a safety margin, don't plan on the projector's battery lasting more than two hours per charge, and make sure to charge the battery soon before you plan to use the projector; rechargeable batteries tend to lose charge if they sit unused for long periods.

LED light engine. While they don't produce a ton of light output, light-emitting diodes (or LEDs) are both energy-efficient and long-lived, so they never need to be replaced. They also draw far less power than traditional arc lamps, which is part of what gives the PH300 its impressive battery life. During use, the projector draws only 25 watts of power unless it is also recharging the battery.

Onboard sound. Somehow, the engineers in charge of the PH300 found room in the case for a pair of one-watt stereo speakers. While that's nobody's ideal sound system, it does mean that the projector can be used for entertainment without any external devices or cables. There's also a 3.5mm audio jack, so you can hook up a small set of speakers or some decent headphones for better audio quality.

Connectivity. Though it is a tiny projector, the PH300 has an impressive array of ports. There's an HDMI port with MHL, perfect for use with a Roku stick or other streaming device. There is one 1/8" audio output, allowing you to connect to a more powerful sound system. There's one USB port for loading files for the onboard media player. There's also a coaxial port for the onboard ATSC TV tuner.

Low input lag. With 33 milliseconds of input lag, the PH300 is right in line with most other low-cost DLP projectors. 33 milliseconds is about two frames of a 60 FPS signal, which is plenty fast enough for all but the most serious and demanding gamers.

Who's it good for?

At roughly $400, the LG PH300 is priced well below most "real" projectors, but it costs a fair bit more than the "cheap" projectors we recently examined. And at 300 lumens in its brightest mode, it doesn't have the brightness that people have come to expect in entertainment projectors. But it is definitely a unique and worthwhile product even if it doesn't fit many of the traditional "projector" applications. Here are some ideas about how to use it that may spark your creativity:

Brightness. The PH300 only produces about 300 lumens, and only in its brightest mode. Using the projector with Energy Saving set to Max will increase battery life but reduce brightness. If you need to use the PH300 without its power adapter, it's best to do so in rooms with little to no ambient light - or use very small screen sizes.

Rainbows. As a single-chip DLP projector, the PH300 will sometimes create rainbows. This is an unavoidable fact. However, since the projector is usually used on smaller screens due to its relatively low brightness, your eyes do less rapid back-and-forth searching and hence you should see fewer rainbows. If you use the projector at a full 100" diagonal and sit at home theater distances, expect to see about as many rainbows as you would on a DLP projector with a 4x-speed color wheel.

The LG PH300 is a rare portable projector that is not only portable but also completely cordless. With native 720p resolution, an LED light engine, and an onboard battery and speakers, the PH300 can be used anywhere you go. Load your favorite media onto a USB drive and run it from the projector's onboard media player. Connect up a Roku streaming stick and watch Netflix. Or hook up an antenna and watch over-the-air high definition TV from the road. No matter where you go or what you want to watch, the LG PH300 can come along with you.

You can buy the LG PH300 on Amazon for $399. If you purchase the projector using this link, you also help support Projector Central.

For more detailed specifications and connections, check out our LG PH300 projector page.

Comments (9) Post a Comment
davidm Posted Jun 18, 2015 7:31 AM PST
I'm going to assume since the review didn't mention it that this thing sounds like a mini hairdryer in the room, because for some reason it's considered ok for a video device to make a lot of noise and that not to be a factor in its review. Fortunately people are starting to notice this issue and hopefully by 2016 noisy projectors will be a thing of the past and, with LED and laser projectors, we can have them on for ambient media while still enjoying silence. Certainly reviewers calling attention to noise helps.
bobdbob Posted Jun 21, 2015 12:32 PM PST
Portable gaming is mentioned here. What's the input-lag like?
Bill Livolsi Posted Jun 22, 2015 4:56 PM PST
bobdbob: input lag is 33 milliseconds.
chris Posted Jul 23, 2015 11:52 AM PST
I almost bought the PH300s as an impulse buy because I thought it was PH300. At the price, I would have bought two if it had a tuner. I have questions about the PH300: 1. How many lumens does it measure in the quietest mode with a reasonably viewable picture (not overly blue or green)? 2. What is the dbA in the quietest mode? 3. Does the fan produce a high pitched whine in brightest mode? 4. Finally, I downloaded the manual and it gives no info about the battery. What battery does it take and can the user replace the battery?
Phreon Posted Nov 21, 2015 9:23 AM PST
The PH300 *does* have a tuner.
Phreon Posted Jan 4, 2016 9:55 PM PST
Regarding the comment that the PH300 sound like a "mini hair dryer", that is a gross exaggeration. Running maximum brightness, I have to put my ear up to it to really hear the fan. It's a tiny whine at best. Considering this is a 720P projector the size of a Big Mac, what more could you ask? The heat has to go somewhere...
Micks Posted Jan 18, 2016 11:38 AM PST
@Phreon - just got my PH300 & it is very noisy. Mine definitely sounds like a mini hairdryer, especially on battery. I think the smaller fan creates a higher-pitched sound than the other projectors I've used (ML750, PLED-W500, PLED-W800, plus various bulb-based models).

In addition to the noise, I was annoyed by the picture quality. First, 300 lumens is not enough...the Aaxa P300 (400 lumens) or Dell M115HD (450 lumens) are much better. Second, it was difficult to focus using the wheel since it keeps overshooting, and even in-focus, text is still a bit hard to read. Didn't have the same issue on the other 720p LED projectors I've played with.

I really wanted to like this one, but it's going back :(
Oli M Posted Jan 22, 2017 6:33 AM PST
Mine is much noisier than I expected. Without having an external speaker turned up loud, the fan is certainly quite annoying. I'm going to look into one of their newer models.
Stephane Posted Apr 4, 2020 1:59 AM PST
While the projector does make some noise itâs one of my favorite camping gadgets. Perfect for camping or movies in the yard. I use a roku stick If internet is available at my site or download the movies on the phone and connect via hdmi. For sound I connect through the headphone jack an amazon tap speaker (smaller wireless Alexa with great sound) and connect it close to the projector. The sound of whatever Iâm watching more than covers up the fan noise. To avoid missing overtime in a game or the end of a movie In case I paused it we also have a jackery 240 portable solar/electric generator (makes no noise) and can use this thing for hours. I highly recommend it to anyone considering a MOBILE projector for sporting games or movies. Iâm not sure about gaming graphics as I have not used it for that. The added cost of the speaker, roku and generator are all things to consider but Iâd definetly recommend the speaker at the very least to resolve any noise issues.