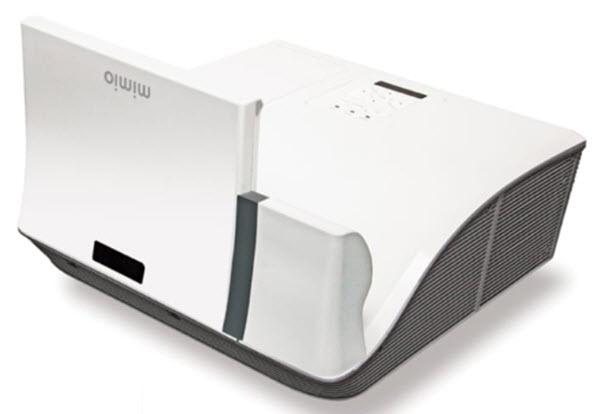 Most ultra short throw projectors come from companies that build a lot of projectors. Mimio, in contrast, focuses on products for the education market and offers only one projector, with its first model aptly named the MimioProjector. Despite the company's limited projector experience the MimioProjector is a highly attractive product, and not just for the classroom but for business conference rooms as well.

The Mimio Projector delivers some notable improvements over models from companies known for projectors, largely because even though it's built around a 1280x800 DLP chip, it uses an IR camera instead of TI's interactive technology.

The camera comes as a separate module that fully integrates with the projector. Among other benefits, that lets you buy the projector and then add the camera later without the addition working like a bolted-on afterthought. It also gives you interactivity at the projector's full brightness, which we measured at just a little below its rated 2800 lumens.

All this makes the MimioProjector a solid value, at prices ranging from $1,329 list for the projector itself to $1,899 with the interactive module and two pens -- with education prices ranging from $999 to $1,499. There's also a modest savings for buying everything together instead of separately, although the wall mount is extra in any case.

Ultra short throw. As you would expect from any ultra short throw projector, one of the MimioProjector's key strengths is that it can throw a big image from close to the screen. For my tests, using a 92" diagonal image at the native 16:10 aspect ratio, the front of the projector was just 14" from the screen, while the mirror where the image comes from was just 13" farther away. This is consistent with Mimio's projection chart, with image sizes ranging from 70" to 100" diagonally at 7.2" to 16.7" from the front of the projector.

Interactivity is an add-on option, but fully integrated. The MimioProjector is unusual in being a non-interactive projector with an interactive option. If you don't need interactivity now, but think you might need it at some point, this gives it the obvious advantage of letting you future-proof your purchase.

Interactivity with full Brightness. Unlike projectors with TI's interactive technology, the Mimio Projector doesn't lose brightness when you turn on interactive mode.

Near excellent data image quality. Data image quality for the MimioProjector is a little short of excellent, but not by much. Colors are fully saturated, but lack vibrancy, with the colors a little dark in terms of a hue-saturation-brightness color model. Fortunately, although this is true to some extent with all the preset modes, it's obvious enough to be a potential problem only with the brightest preset. That makes it less of an issue, since most projectors' brightest modes have problems with color quality.

More important for data images is a slight loss of fine detail. With text, for example, fonts at 9 and 7 points were less crisp, and less easily readable, than they should be for both black text on white and white text on black.

Easy to handle pen. The MimioProjector's pens are thinner than some highlighters, making them more comfortable to use than any other interactive pen I've seen. This is a welcome touch for anyone, but will be particularly helpful in a classroom, where children with small hands may have trouble controlling a thick pen.

Good, not great, audio quality. The stereo audio system in the MimioProjector, with two 8-watt speakers, is easily loud enough for a medium-size conference room or classroom. It also delivered high enough quality in my tests to let me make out almost all of the dialog in one test clip that's nearly indecipherable with many projectors. If you need more pronounced stereo, better quality, or higher volume, you can connect an external sound system to the stereo audio output.

3D support. Like most DLP projectors today, the MimioProjector offers 3D support, although it is more of an interesting extra than a key feature. Like more recent 3D projectors, it also has an HDMI 1.4a port, which means you can connect it directly to a Blu-ray player or other video source for 3D. If you've already invested in 120Hz DLP-Link glasses, however, you may have to replace them. The projector will work with either the older glasses or with newer 144Hz glasses with 3D games, but it needs 144Hz glasses for 3D Blu-ray discs at 24 frames per second.

Suitably Bright image. The MimioProjector came in at a touch below its 2800-lumen rating on our tests, at 2703 lumens with its brightest preset. The three other presets ranged from 1207 to 1708 lumens, and Eco mode dropped the brightness by about 23%, to 2071 lumens in the brightest mode.

Acceptable brightness uniformity. Maintaining uniform brightness over the entire screen can be a challenge for ultra short throw projectors, but even in that context, the MimioProjector's brightness uniformity was unusually low, at 57%. That was enough to show on a solid white screen as an obvious hot spot at the bottom center with cool spots on the upper left and right corners. However the difference is far less obvious on a screen that's broken up by text or graphics, making it unlikely that anyone would find it bothersome.

Good connectivity. The MimioProjector lacks a USB A port for reading files from a USB memory key, but otherwise includes all of the connectors you're likely to need:

Video is best reserved for short clips. The MimioProjector's video quality is good for a data projector in most ways, with the projector showing minimal noise, handling skin tones and shadow detail well, and resisting posterization in scenes that tend to cause the problem. Its Achilles heel, however, is rainbow artifacts, which are always a potential issue for DLP projectors. As is typical, it shows the artifacts more frequently with video than with data, so although no one is likely to find them bothersome for data images, anyone who is sensitive to these artifacts is almost certain to find them annoying with video that lasts more than a few minutes.

Needs calibration. Unlike TI's approach, the MimioProjector's interactive technology needs calibration between the pen and projector any time you move the projector or change resolution. However the calibration goes quickly, since it requires touching the pen to only nine points.

Needs software installed on the computer. Windows doesn't recognize the MimioProjector as a human interface device, which means you have to install the entire Mimio software package, which includes the driver, on any computer you want to use the interactive features with. The projector comes with a license for just two PCs, but Mimio says a variety of site licenses are available for a wide range of different needs.

As may seem obvious, the MimioProjector has lots more going for it than against it. As a non-interactive 1280x800 ultra short throw projector, it delivers near excellent data image quality, an impressively short throw, better audio quality than most projectors, and 3D support for direct connection to 3D video sources. As an interactive model, it offers interactivity without any loss of brightness, an unusually easy-to-handle pen, and the option to use two pens at once in Windows 7 or 8.

The interactive option is also a key strength. There are ways to add interactivity to almost any projector, but few, if any, of those choices integrate so seamlessly with the projector as Mimio's interactive upgrade.

The issues with video make the MimioProjector the wrong choice for long video sessions. However, it's one of the best choices otherwise if you don't need interactivity now but want to keep your options open for adding it later. It's also a strong contender in general as either a non-interactive or interactive 1280x800 ultra short throw model, and it's well worth a close look.

For more detailed specifications and connections, check out our Mimio MimioProjector projector page.

Comments (4) Post a Comment
michele Posted Aug 27, 2013 7:05 AM PST
Has anyone has an issue extending the "short" usb cable included so that you can run a cable to the desk computer...that will in all probability be more than 16' from the projector?
paul Posted Sep 9, 2013 1:37 PM PST
we convert the usb to cat 5 and run it through the network.
PacoPe Posted Sep 9, 2014 8:50 PM PST
the most strong feature is when you work in the Classroom or in main Directory rooms, in interactive mode with Mimio Studio plataform with Mimio Pad & Mimio Mobile Options. Recomended, only test, nice Suite & results, the best experience in cost/benefits terms.
Andre Posted Jan 27, 2016 9:42 AM PST
DO NOT buy this product! We have been using 3 Mimio Projectors for the last 2 years and they have been the worst purchase we ever made! The pens are ultra delicate, we have had the pens replaced 9 times. So bad now that the teachers only use the pens in exceptional cases.

The speaker on one of the projectors only works intermittently and on another projector the bulb went after 6 months (but only 1600 hours) and replacement bulb cost over â¬200.

The experience has been compounded by almost non-existent customer support.