At Bryant University in Smithfield RI, AV systems serve to educate students in the classroom as well as keep them informed about current events on campus and in the world at large. In the process, AV has converged with data for network distribution.

Founded in 1865, Bryant is a coed private business college, which prepares its graduates for success in life through its student-centered mission that includes challenging academic programs and a culturally enriching campus life. The college is accredited nationally by the prestigious AACSB, the International Association for Management Education.

AV and information technology are well-established at the college. Bryant students have access to computer terminals, microcomputers, networked workstations and the internet. In addition, students can bring their own computers to access the internet from their residence hall rooms. The library is considered to house one of the region's most comprehensive business collections, containing more than 140,000 items in book, journal, audiovisual and electronic formats. Bryant schedules two regular semesters, fall and spring, and both a winter and a summer session.

"We realized that voice, data and video are converging, and we built our infrastructure as far as the network to support that," explained Phil Lombardi, Bryant's director of academic computing and media services. "That's the way the industry is going. Everybody, not just students, wants the information and the content now. For example, when we're looking on the internet, we no longer want to search through web browsing and come up with 100 hits. We want the content immediately.

"So, we've been challenged in IT to not only handle that end but also the video side. We recently merged our IT department with our library and our audiovisual group, which was a great marriage. We've always had the IT pulling one way and audiovisual handling another aspect, which was moving around projectors and TVs to classrooms. And now we have high-speed network connections. Let's face it, a lot of the AV technology is built with the ability to communicate over the network."

Classrooms, the dining hall, rotunda and hallway plasma monitors can be controlled from a central location using Crestron's e-control system and IP over the LAN. Messages can be sent campus-wide and controlled via the web using AxisTV's digital signage product. An administrator can now manage and monitor room/systems status, and can power-down projectors and view a projector's lamp hours used from a desktop using Crestron's RoomView software.

The college's AV update coincided with the addition of the new digital signage system. The switch from traditional paper-based notices and posters, now deemed fire hazards, has been made to a network-based electronic bulletin board. The new stricter fire prevention laws were the result of a catastrophic fire in February 2003 at Station nightclub in West Warwick RI, in which 100 people were killed by out-of-control pyrotechnics.

Before we launch into the install, let's get our bearings. All AV installs are in Bryant's Unistructure Building, which is a vast, 330,000-square-foot heart-of-the-campus venue, housing administration and faculty offices, student reception and all classrooms. The building has a stunning, two-story atrium entrance/lobby with a 24-foothigh skylight dome. This rotunda is an excellent focal point for an electronic bulletin board. "There are four of five hallways that come into this particular ground level area," said HB's Bohan. "It's a showpiece."

Two 100-inch Mitsubishi XL5950LU custom rear-screen projection displays are located under opposite stairwells in the rotunda. Allowing for a flexible screen configuration, a quad processor can display four different images simultaneously to each screen, or one large image. The display sources include AxisTV digital signage, cable stations, VCR/DVD combo and one RGB input for a laptop. Crown program amplifiers drive pairs of JBL Control 28 speakers, which are set into the millwork of each screen. The system is Crestron-controlled at the rotunda or from IT director Lombardi's desktop in his office, via a web page created by HB.

AxisTV content would include relevant information for students similar to the traditional bulletin-board events. However in contrast, digital signage's characteristic razor sharp visual imaging certainly is more eye-catching than typical paper postings, which tend to clutter up bulletin boards. All campus electronic postings are cleared through an administrator. "On the other display, they'll have a full size screen with cable showing most of the time," said Bohan.

The elegantly designed Salmanson dining hall, which is open from morning till night, is a prime gathering place for news and campus information as well. Two Zenith 60-inch plasma displays in the large dining area and a 43-inch plasma in the private dining area can access AxisTV or cable feeds via the installed Crestron touchpanel. "Then we put up a wall plate on the smaller (43-inch) plasma where someone can connect a laptop, if need be," said Bohan.

"The dining hall has become a very versatile area for activities other than the displays for the students. A stage area can be set up for live performances or, for instance, a speech by the college president." Events can be recorded as well. There's connectivity for microphones, speakers, three video cameras and a video projector. A 9x12-foot portable fast-fold screen has been included for large presentations. Speaker zones accommodate the high and low ceiling areas in the space.

An operator I/O pane allows the presenter to connect the touch panel to control the entire AV system, input RGB and video connectivity with audio, and connect an intercom headset to communicate with camera operators when videotaping a presentation.

A dual bay rack residing underneath one of the stairwells is a dedicated area for the AV equipment. All major AV components, including the RGB matrix switcher that manages the signal path, DAs and two VHS decks used as inexpensive tuners can be found there. The rack can be wheeled out during a performance. The portable sound system includes two stage monitors driven by a 400 watt amplifier, a multiple input JBL EON mixer/powered speaker system and live performance hardwired and wireless mics.

In this current project, five classrooms have updated projection systems and touch panels. These rooms are part of an ongoing technology update, for which HB has already outfitted some 20 classrooms and is working on more at press time. Rooms can be controlled within the classroom itself or via the web panel interface.

A typical classroom has a custom AV podium/instructor station, which HB outfitted with a rack system. Within the rack are a Panasonic VCR, Stewart power amplifier and Extron signal path devices. Control is via a black and white touch panel. There are two computer inputs: one for a laptop and one for a dedicated computer. Each podium has an HB custom multi-pin cable harness. Room components include a ceiling-mounted NEC LED projector, Da-Lite 100-inch motorized screen and two JBL speakers, wall mounted on each side of the screen. Bohan lauds the RoomView function that can program the system to shut down classroom projectors automatically on Friday night that otherwise may have been left on. "Ultimately, it's going to save the college money."

Noting that the convergence of IT and AV continues, Lombardi said, "We're adding a digital TV studio this fall. And we're tying it into the whole network infrastructure." He hopes to get students into the TV studio to create presentations, which they can show in the classrooms. "I come from an IT background. And since we merged the media end into my division, I find the whole process exciting."

HB Communications began in 1946 providing film projectors for schools. Today, it's the largest communications company of its kind in the Northeast, integrating communications technology that includes integrated presentation and streaming solutions. HB's offices in North Haven CT and Waltham MA include sales, service, fabrication and warehouse facilities that service its regional client base.

HB recently expanded its Waltham office, moving into a 10,000-square-foot facility. In addition, the North Haven facility has grown to 95,000 square feet. The company has also added an office in New York City, near Penn Station, to service the burgeoning work in the area. 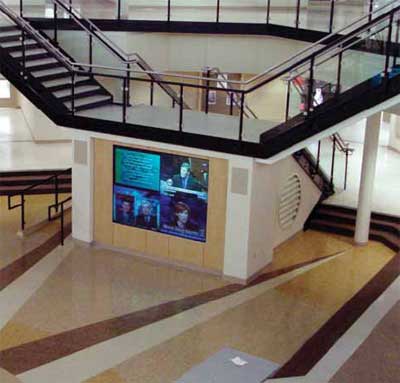