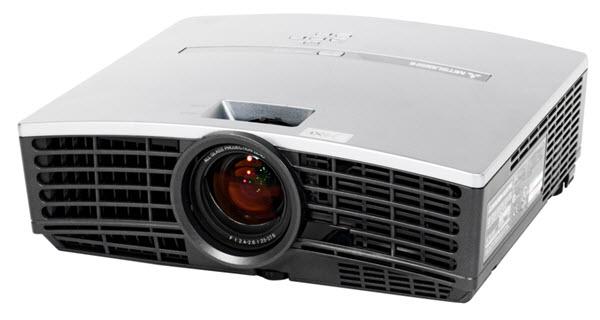 In the past six months there have been several entry-level home theater projectors of exceptional quality released. Together they redefine what a low resolution projector is capable of. The latest addition to this group is the Mitsubishi HC100U Colorview, and it has a lot to offer.

Connection Panel. One composite video, one S-Video, One set of standard YPbPr component inputs, one 15-pin VGA port, one DVI port that supports DVI-D with HDCP, two sets of RCA audio-in ports, one 1/8" audio in port, and one RS-232C port for an external control.

The HC100 stands out in many ways, not least among them being lumen output. The HC100 is rated at a maximum of 1300 lumens, which makes it one of the brightest 854x480 projectors available at the time of this review (When this projector was announced at CES 2005, there was an error on the spec sheet that claimed 1500 lumens; this is incorrect). However, the more important number is the lumen output when set for optimum video - in this case, approximately 300 ANSI lumens, which is easily bright enough to provide a pleasant viewing experience in a darkened home theater environment. If you need more light, there are several ways to boost lumen output without sacrificing too much image quality - i.e. enable CineRichColor, which will raise lumen output in the highlights about 20%, turn off sRGB, or switch the lamp to high-power. Setting the lamp to high power boosts lumen output approximately 15%, and reduces lamp life from 3000 to 2000 hours.

Brightness uniformity on our test unit was approximately 83%, which is better than average for this class of projector. We saw no visible hotspots and the video image appears to be evenly illuminated from side to side.

Color performance is top-notch, even straight out of the box. In sRGB mode, the HC100 takes color adjustment out of the hands of the end user by disabling the hue and saturation controls, and delivers a well-saturated picture that adheres almost perfectly to NTSC color standards without requiring calibration. When not using sRGB mode, however, colors have a tendency to appear undersaturated, especially reds. We found that disabling CineRichColor helped to eliminate this issue, though it comes at the expense of decreased highlight brightness. It is up to the user to find the right level of compromise on these adjustments.

One of the advantages of the HC100's native 854x480 resolution is its ability to display standard- and enhanced-definition material without vertical scaling. This means that 480-line NTSC DVD material can be displayed with exceptional sharpness and clarity.

Furthermore, in what is becoming a pleasant trend in 854x480 projectors, the HC100's scaling of high definition material exceeded our expectations. With 720p or 1080i signal, the unit compresses the signals cleanly. Despite its low resolution, the HC100's HDTV performance is impressive and competitive with higher-resolution projectors.

The HC100's performance with video game systems is excellent. However your choice of an input signal makes a difference. Using a composite signal, the image quality is acceptable, though not as good as it is when using component video. With an Xbox set to 16:9 output and using a component connection, the HC100 performed well with any game we tried with it. You may want to set the lamp to high-power and gamma to standard for gaming use. Using cinema settings, video games lacked some of the dynamic range that the projector is capable of generating.

One unusual and noteworthy feature is the HC100's sealed light path. This means that the projector's light engine is sealed off, eliminating the need for an air filter. This saves you the little project of having to clean or replace the air filter every month or two, as is required with most digital projectors. This feature decreases the hassle of owning a front projector - until you need to replace the lamp, you can more or less ignore it without any adverse effects.

The HC100 features a versatile color temperature control; there are presets for 5900, 6500, and 9300 Kelvin, and a setting labeled "User" that allows you to adjust the contrast and brightness of red and blue to their liking in order to achieve a desired color temperature.

The HC100's remote is small and functional with a matte black finish. Like many remotes, it has a backlight; however, pressing one of the remote's buttons is the only way to activate this, as there is no designated backlight button. This means, for example, if you inadvertently press a source button while the backlight is off, it will result in the activation of the backlight and the switching of the source simultaneously.

On the other hand, the remote is well-featured for home theater use, including direct-access buttons for each of the unit's possible sources, as well as an aspect ratio control, color temperature control, gamma adjustment, and volume controls for the unit's built-in 2W speaker.

The on-screen menu system is simple and easy to use; controls are logically divided into four categories, and the menu stands out well against the background material - however, it is rather large, taking up nearly one third of the projected image when displayed.

The HC100 has a 2x rotation speed, 4-segment color wheel means that viewers who experience the DLP "rainbow effect" may experience it on this projector as well. However, this reviewer sees fewer rainbows on the HC100 than on other DLP projectors with the same color wheel and rotation speed. So the 2x speed wheel specification by itself should not stop you from considering the HC100, even if other DLP projectors have created a problem for you. As always, an audition is recommended to determine whether DLP rainbow artifacts would affect you and those in your household who will watch the projector regularly.

Fan noise on the HC100 is low to moderate when the lamp is in high power mode, but it is barely noticeable in standard power mode.

First-time projector users are able to set up and start using the HC100 in no time at all as it delivers a beautiful image out of the box. Some minor adjustments will fine tune it for full potential, but they are not necessary for a satifying viewing experience.

Lens shift is becoming a popular feature, so some may be disappointed to learn that the HC100 lacks it. However, the designers of the HC100 have compensated for this with a pre-set throw angle. At a throw distance of about 12 feet, the bottom edge of the projected image is 24" above the lens center, or approximately 2 inches rise per foot of throw distance. This offset - approximately 9.5 degrees - helps accommodate coffee table and most ceiling mount installations. A rear shelf mount, on the other hand, may be somewhat more difficult, and most likely require tilting the projector and correcting the image with keystone adjustments.

Of concern to those mounting a projector on a coffee table is light leakage; the HC100 has some light escape from the front vents and a right side exhaust vent. The exhaust vent light could be visible to those sitting close behind the projector on the far right, but for the most part it is a non-issue.

As far as aspect ratio control is concerned, the HC100 allows a user to display the image in a number of different ways. The standard usage is to operate in 16:9 mode, such that 16:9 material is displayed full frame, and 4:3 is centered in the middle of the 16:9 frame. However, by feeding the HC100 a 16:9 signal and switching the projector to 4:3, the 16:9 image can be displayed properly within this 4:3 frame. In other words, the 16:9 image has black bars all around, due to the pillarboxing of 4:3 and the letterboxing of 16:9. This is useful for consumers who wish to use the HC100 primarily as a 4:3 projector, but don't want to move the unit or change the zoom when viewing 16:9 material. The trade-off, though, is that the same image is displayed using fewer pixels, resulting in less fine detail. Finally, the HC100 also gives you an "expand" option for 4:3 material, which lets you zoom the 4:3 image to fill the 16:9 frame, while losing picture information from the top and bottom of the image.

The HC100 is advertised as a portable home theater projector - the emphasis is that it can be set up or taken down in a matter of minutes, and the 2 watt speaker eliminates the need for a sound system in a temporary setup - for example, at a neighbor's house for a super bowl party. While the projector does not come with a carrying case, it is nonetheless very easily portable.

The HC100 is an outstanding performer, both within its price class and outside of it. While it is priced slightly higher than other 854x480 resolution projectors, it has several unique features to offer. The potential for high lumen output means that larger diagonal sizes (up to 120") can be used with little degradation of image quality. Color decoding is excellent, and deinterlacing and scaling are top-notch. The sealed light path ensures that dust will not become a problem, and lets you operate maintenance free as far as filters are concerned. And the 3,000 hour lamp life in standard lamp mode means you won't be changing lamps very often either.

Used with NTSC DVD material, the lack of vertical scaling contributes to a clean, sharp image. With HDTV, the internal scaler and image processing deliver an image that made it look like a much higher-priced projector.

Overall the HC100 is Mitsubishi's best entry-level projector yet. Those looking for their first full-featured home theater projector should give the HC100 some serious thought, as there is little about this unit that will disappoint.