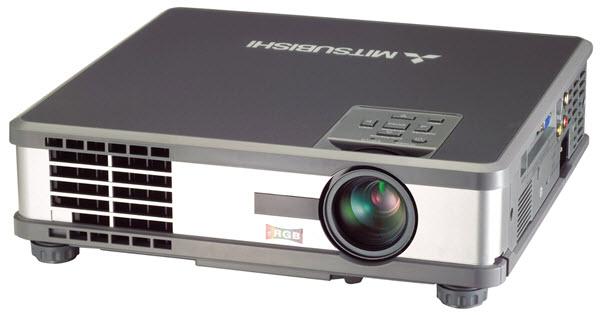 The "entry level" home theater market is expanding rapidly and being fueled by a variety of new and inexpensive projectors that are remarkably high in performance for the money. Among those worthy of particular attention is the Mitsubishi HC3 Colorview home theater projector. With a 16:9 widescreen format in 960x540 resolution, it is the latest of the so-called 1/4 HD machines to hit the market. Every projector has its unique and most appropriate uses, and this one is no different. But for the right viewing environment, this is a dynamic little unit that we are pleased to add to the Highly Recommended list.

To establish some context, the recently announced Sanyo PLV-Z2 and Panasonic PT-L500U have established a $2,000 price point for widescreen home theater projectors featuring 1280x720 resolution. This has forced prices down on widescreen projectors that are one step down in resolution--those which feature 960x540 pixels. This resolution format is called 1/4 HD since it is 50% of the HDTV 1080i signal format in both horizontal and vertical dimensions.

Within the 1/4 HD group the popular Panasonic PL-L300U, on our Highly Recommended list for the past year, has just been reduced in price and is now selling for under $1500. Also highly recommended this year has been the Sanyo PLV-Z1. Prices on the Z1 have followed suit, and the Z1 is still selling for several hundred less than the Panasonic L300 as it always has been. The Sanyo PLV-Z1 is also being marketed as the Studio Experience Matinee 1D. These models have made up the unique 1/4 HD resolution group of products.

Now comes the new Mitsubishi HC3 to challenge these established products for a piece of the upper entry-level home theater market. Like the products just noted, the HC3 is a 960x540 resolution LCD projector with a few key advantages of its own.

The HC3 is a 16:9 widescreen format LCD projector in 1/4 HD resolution that is rated at 1300 ANSI lumens of brightness and 500:1 contrast. It is designed for home entertainment use and is best suited to viewing environments in which the user typically has, either by plan or necessity, some ambient light present in the room.

Lens. Manual zoom/focus, with 1.2x zoom range. Provides a relatively short throw, filling a 100" diagonal screen from a distance of 10.7 to 12.8 feet.

Connector panel. Located on the left side of the unit as viewed from the rear. Features a single 15-pin VGA port for computer, HDTV, and component video inputs, one S-video port, one composite video jack. Also includes audio input to drive a single 2-watt onboard speaker.

Since the HC3 is a new competitor that targets two very popular units, the Sanyo Z1 and the Panasonic L300, readers will want to know how they compare. Thus the following discussion will combine performance observations and comparative comments in one analysis.

Brightness. Foremost among the HC3's advantages is the fact that the it is much brighter than it direct competitors. Our HC3 test unit measured 1024 ANSI lumens in its high lamp output mode, and 921 in low lamp mode. By comparison, the next brightest unit in the group is the Sanyo Z1, which measured at 646 in high lamp mode, and 503 in low mode. The L300 measured 467 and 392 respectively. Those lumen numbers for the Sanyo and Panasonic will undoubtedly sound quite low compared to the HC3, but in dark viewing spaces these projectors still produce sufficient light to successfully illuminate a large screen.

Nevertheless, the HC3's substantial light output makes it more suitable for use in social settings where you want some indirect ambient light in the viewing areaâa family playing video games or a party, or even watching a movie with friends or family without having to sit in the dark.

The home theater market consists of two types of consumers. One is the home theater purist who will prefer a dark viewing environment to experience maximum contrast performance, and to replicate the commercial movie theater environment to the greatest degree possible. The other is the home entertainment enthusiast who sees social or family interaction as integral to the big screen experience in the home, and who will thus prefer some ambient light in the room. The HC3 is designed to appeal more to this latter user type, whereas the PLV-Z1 and the L300 are better suited to the former.

Color performance. Color accuracy and saturation on the HC3 are second to none in the category. The color dynamics are beautiful. Furthermore, the HC3 is calibrated quite adequately coming out of the box. No calibration discs are needed if you are the type that doesn't want to mess with them. Nevertheless, for those who take it more seriously, a wide variety of image controls are available that let you to create and store up to four user-programmed calibrations for different types of viewing.

Brightness and color performance are the two leading advantages of the HC3. Other important performance factors such as pixelation, deinterlacing, keystone correction, and contrast need to be discussed and placed into context relative to the units the HC3 competes with.

Pixelation. First time buyers should be aware that visible pixel texture, or pixelation, is an important factor to consider, particularly on machines of this resolution. If you get close to the picture you will see the thousands of individual pixels that create the image. This visible pixel texture is something you want to avoid seeing in the image during normal viewing. The way you avoid it is to sit back far enough so that the pixel structure becomes invisible.

How far back is far enough? On the HC3, if you plan for a viewing distance of 2.0 times the screen width or greater you will eliminate the problem. So for example, if you have a 100" diagonal 16:9 screen, it is 7.25 feet wide. So a viewing distance of about 15 feet will render the pixel structure invisible.

From a competitive point of view, the HC3's pixelation is comparable to the Sanyo Z1. The Panasonic L300 has a definite edge over both the HC3 and the Z1 in this regard. In practical terms that means with the L300 you could view a 100" screen from a distance of about 12 feet or so without any visible pixelation.

Deinterlacing.The onboard deinterlacing on the HC3 is reasonably good, but not the best we've ever seen. For DVDs, better picture stability and sharpness were achieved using progressive scan inputs, which bypass the internal deinterlacer. HDTV 1080i was impressively sharp, but a few deinterlacing artifacts were present with this signal as well. Picture quality was still quite impressive for the money, but we found motion artifacts to be a bit more noticeable on the HC3 than on the competing units.

Digital keystone correction. The HC3 has vertical and horizontal keystone correction. As we have said in many other reviews, this is a feature you should avoid using if you can because it reduces the number of pixels in use, thus increasing potential visible pixelation. It also reduces the lumen output of the projector, and the rescaling involved can impart a slight softening of the image.

Contrast. Technically speaking, contrast on the HC3 is slightly less than on the Sanyo Z1 and Panasonic L300. However two things should be noted here. First, the differences are rather subtle, even in a dark viewing area. Second, in a room where ambient light is present it doesn't make any difference anyway since almost any amount of ambient light will have sufficient impact on black levels to obliterate any visible difference between these units. Meanwhile, with ambient light present, the additional brightness of the HC3 delivers brilliance in the highlights that the Z1 and L300 are not capable of. Thus in this viewing environment the HC3 will appear to be the highest contrast projector of the three.

So what home theater situation is best for the Mitsubishi HC3? To get the absolute best results from the HC3, including no pixelation, minimal apparent deinterlacing instability, maximum color saturation, and maximum effective contrast, we would suggest using it with a relative small high-contrast gray screen, say 90" diagonal, and view it from a distance of at least 13 feet with low indirect ambient light in the room. (Keep in mind that light sources in the room should never have a direct impact on the screen. Point-source lights such as table lamps should be avoided. The best indirect room lighting comes from sources such as wall sconces or track lighting that bounces low intensity light off the ceiling.)

That might sound like a rather unique and specific set of installation requirements. And the fact is that you can certainly diverge from this recommendation and still get very satisfying results. You could go up to a 120" diagonal screen for example. However, in so doing you sacrifice some contrast and color saturation. Meanwhile you may increase pixelation and the visibility of motion artifacts if you are seated too close to the screen.

Thus in recommending a 90" screen we are going for optimum image quality. And with this type of set-up, what you end up with is an image that looks quite a bit like a huge plasma TV, a very bright image that is rich in color saturation and detail, with all of the projector's weaknesses effectively neutralized. It is ideal for viewers who want a widescreen home entertainment system, but who want to avoid the necessity of a dark viewing environment.

For those seeking the very large screen experience, a 90" diagonal screen may not sound too big, and for many it won't be big enough. But think about this for a moment. A 42" plasma TV has just 777 square inches of image area; a 90" projection screen has 3,555 square inches of image area. So in essence the Mitsubishi HC3 delivers a vibrant image that is 4.5 times the size of a plasma TV for quite a bit less money.

The bottom line is that the HC3 offers a unique and effective solution for users who want some light in the viewing space. It does this better than the Sanyo Z1 and Panasonic L300, which are used to better effect in dark environments. Thus we are pleased to add the Mitsubishi HC3 to our Highly Recommended list. Whether the HC3 or one of its competitors is the right choice for you depends on the type of viewing environment that is best suited to you and your family's needs.