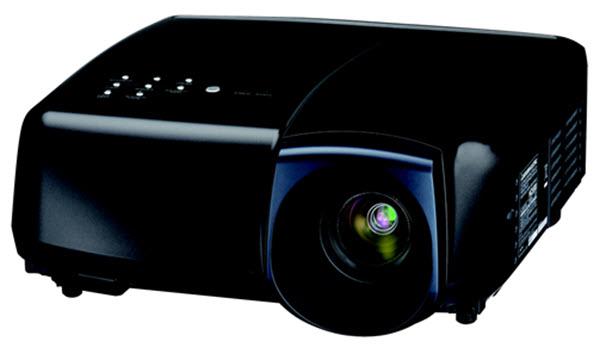 The Mitsubishi HC5500, just announced last month, is this company's fourth 1080p resolution home theater projector. It follows in the footsteps of the HC5000, the HC6000, and the HC4900. It offers many of the performance advantages of the HC6000, but it comes to market at a sweet price of just $2,495.

Though the HC5500 will replace the HC4900 as Mitsubishi's least expensive 1080p model, it offers a variety of features found on more expensive home theater projectors. Key improvements in the HC5500 over the HC4900 are the following:

• Much faster auto iris. On the HC4900, with a shift in scenes from bright to dark it would take the auto iris a second or two to adjust to the maximum black level. On the HC5500, the iris adjustment happens so quickly that it is invisible.


• Improved video processing. The Pixelworks processor on the HC4900 has been upgraded to the Silicon Optics HQV chip.

• Anamorphic lens compatibility. The HC5500 has a versatile scaling package that allows the user to install an anamorphic lens and leave it permanently in place no matter what aspect ratio the subject matter is in. This saves the cost of a motorized track, which can be substantial, or it eliminates the need to manually move the lens when one switches from 2.35 to non-2.35 material. Either way, it provides a friendlier solution for those interested in super-widescreen 2.35 installations.

• Fan noise. The HC5500 is purported to be a bit quieter than the HC4900. It might be--we can't tell because the HC4900 was already stone quiet, so we don't notice any difference. These are two of the quietest home theater projectors on the market.

The HC5500 has one noteworthy reduction in functionality as compared to its predecessor: the zoom range on the lens has been reduced from 1.6x to 1.2x, and the vertical lens shift range has been reduced from 2.5 picture heights to 2.0 picture heights. Horizontal lens shift, which had a modest range of 5% of the picture width on the HC4900, has been eliminated on the new model.

The new zoom lens and lens shift ranges introduce some restrictions on how and where you can install the HC5500. As is typical, with the lens in neutral position, the centerline of the lens intersects the center of the projected image. From that point you can use vertical lens shift to raise or lower the picture a maximum of 50% of the picture height. That means you can place the image entirely above or below the centerline of the lens, but without any additional clearance. This is great for mounting the projector on a rear shelf or on a bookcase or stand directly behind the seats. On the other hand, for a ceiling mount you may need to use a drop extension tube to avoid tilting the projector to hit the screen.

The short zoom range means that the projector will almost always be placed immediately behind the seats if it is not ceiling mounted. If, for example, you want to install a 120" 16:9 screen, you will need to place the HC5500 at least 12.5' and no more than about 15.25' from the screen. The HC4900 had the same minimum throw distance of 12.5 feet for this screen size, but it could be set back almost 20 feet if your room dimensions required it.

The HC5500's short zoom range means that the projector will be placed at a distance of between 1.4 and 1.7 times the screen width. Since many people prefer to sit at this viewing range, or perhaps just a bit closer, the projector will most likely end up immediately behind the seats in many installations. Thankfully, the projector is so quiet you'll never know it's there. As always, before you place an order, take care to measure out your room dimensions and screen size to ensure that the projector's geometry will fit your intended installation plan.

Lumen readings. In its video optimized configuration with lens at its widest angle, gamma mode set to Cinema and color temperature on Warm, we measured our HC5500 test unit at 610 ANSI lumens, compared to 560 on the HC4900. Thus, on our test units we measure an incremental boost in brightness of about 9%.

Low Lamp mode reduces light output in all operating modes by 26%, and improves lamp life from 2000 to 5000 hours. Since the replacement lamp is $459, users who put a lot of hours on their projectors will find the ability to stretch life out to 5000 hours a desirable option.

ANSI contrast measured 260:1, which is consistent with what we have been measuring for other LCD projectors in the 1080p performance class.

Last December, we gave the HC4900 our Editor's Choice Award for outstanding value in 1080p projection. Now, just seven months later, the HC5500 represents a substantial improvement in image quality over its predecessor. It is not selling below $2,000 like the HC4900 was, but it is still aggressively priced at an estimated street of $2,495. Higher contrast, deeper blacks, upgraded video processing, 1080p/24 compatibility, and a much faster auto iris combine to make the HC5500 a significant step forward in 1080p projection at this price level. We will wait to see how the market develops in 1080p projection before designating this year's Editor's Choice Awards, but the HC5500 must be considered as a strong contender no matter what happens.

Beyond the improved image quality, the flexible scaling to accommodate a permanently deployed anamorphic lens makes the HC5500 a very attractive option for those looking for a cost-effective 2.35 Cinemascope installation. Thus far, this feature has been seen only on 1080p models that are much higher in price. For more information about 2.35 widescreen installation and whether it is right for you, read this article.

Mitsubishi continues to make competitive inroads into the hot 1080p home theater market with its evolving line of 1080p models that are all outstanding value propositions. As with the HC4900 and HC5000 before it, the HC5500 is highly recommended.

For more detailed specifications and connections, check out our Mitsubishi HC5500 projector page.