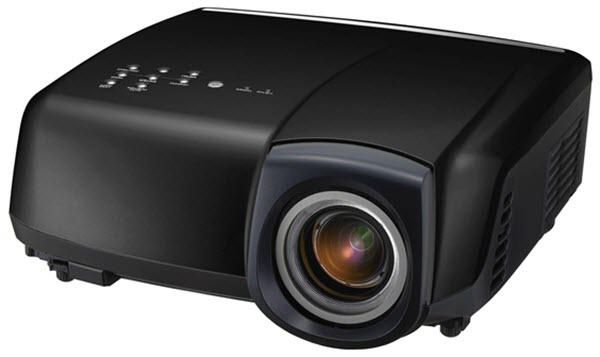 Last year Mitsubishi made strong competitive moves into the home theater market with the release of two new home theater projectors, the HC5000 1080p projector at $4,495, and the aggressively low priced HD1000 720p projector. Both of these models brought exceptional video quality to new low price levels, and substantially improved the strength of the Mitsubishi brand in the world of home theater projectors. This year the company has been making incremental refinements on those exceptional products accompanied by further price reductions. The new HC6000 is basically an HC5000 with the following improvements:

1. Contrast is increased from 10,000:1 to 13,000:1.
2. Dynamic iris speed is improved to virtually eliminate lag time in adjusting to changing luminance from scene to scene.
3. The DVI input on the HC5000 has been replaced with a second HDMI port. The remote now has two HDMI source buttons rather than one HDMI and one DVI.
4. HDMI 1.3 compatibility has been added. (HC5000 was v. 1.2.)
5. Power zoom and focus now includes a "fine-step" option for changing zoom and focus in small increments.
6. Vertical keystone correction has been added.
7. A secondary external air filter has been added.
8. The menu display has larger fonts.
9. Official price is reduced from $4,495 to $3,995. (Consult Mitsubishi dealers for actual street prices).

Since the HC6000 is really an HC5000 with some noteworthy improvements, we will recap the key features that these models have in common and focus here on the improvements. (For reference and background on the HC5000, see the HC5000 review.)

Lumen output: The test sample of the HC6000 measures over 900 ANSI lumens in its brightest configuration, which is the same as the HC5000. Lumen output in video optimized modes is in the 450 to 500 lumen range with the lamp on full power.

Low lamp mode: One of the key features of the HC5000 and HC6000 is its anticipated 5000 hour lamp life in low power mode, compared to 2000 hours in Normal mode. For those putting a lot of hours on their projector, this can save some real money as the replacement lamp costs $459 (a bit higher than the $350 to $400 average for this class of product). Keep in mind that low power mode reduces lumen output by 23%. For screen sizes up to 120" diagonal in a very dark room, low power mode allows the projector to generate a quality image with sufficient contrast. But with any ambient light in the room, or in a room with white or light colored reflective surfaces, you will get some extra pop by either reducing screen size a bit or putting the projector into Normal lamp mode.

Lens and throw distance: Both models have a 1.6x powered zoom and focus lens with powered vertical and horizontal lens shift. The projector puts out the most light when the lens is at its widest angle setting. Moving the lens from maximum wide angle to maximum telephoto reduces lumen output by about 24%, which is less of a reduction than we've seen on most other zoom lenses with 1.6x zoom range. See the HC6000 Projection Calculator for throw distance details.

Installation options: The HC6000 is built for easy installation either in a ceiling mount or rear-shelf mount. However, the ideal solution (if your room can accommodate it), is a rear-shelf mount high enough to overshoot your audience, which lets you keep the lens shift setting near the neutral position. If you ceiling mount, you will need to place the vertical lens shift at the maximum end of its range which reduces lumen output by about 10%. It also tends to be a bit more cumbersome and costly to do a ceiling mount.

Onboard video processing: Both models use HQV processing, and deliver virtually flawless deinterlacing. There is no difference between the HC5000 and HC6000 in this regard. It is hard to see how it could get any better on a projector under $10,000.

Fan noise and heat output: Both models are extremely quiet, and among the quietest of all home theater projectors on the market. In low lamp mode the audible noise rating is a virtually silent 19 dB. If you are planning to install your projector in a small room, the HC6000 is an excellent choice for two reasons. First, its extremely low fan noise makes it unnoticeable in a small room. Second, its energy efficient 160W lamp does not throw off a lot of heat compared to other projectors that can have lamps up to 300 watts or more.

Casework: Both models have been released in black in the United States and white in Europe. Often white is the preferred color for those who ceiling mount their projectors since it blends in with a white ceiling and makes it less apparent in the room. If buyers in the US want it in white, they will be able to order it in white within a couple of months.

Screendoor Effect: A question that continues to come up regarding LCD technology is the degree to which pixel structure is visible in the picture. The visibility of the pixel grid, commonly known as the screendoor effect, is much less of an issue in 1920x1080 resolution LCD panels than it is in lower resolution products. In our experience, 1080p resolution LCD projectors are comparable to 1080p DLP projectors in terms of screendoor effect, while LCOS has noticeably less pixel structure than either LCD or DLP. The one exception is Panasonic's LCD projectors which have virtually no visible pixel structure due to their SmoothScreen filters.

Therefore, if you plan to sit close to the screen you will be able to detect pixel structure on just about any projector. It is most evident in white lettered titles, credits, and subtexts. As with any digital image, if you move back a bit, the pixel structure disappears and the image resolves to a coherent whole. On the HC6000, you must sit at a distance of 1.1 times the screen width for the pixel structure to become invisible. In other words, if you have a 120" diagonal 16:9 screen, it will be 105" wide. On a screen of this size, pixel structure in white lettered titles in the HC6000's image disappears at a viewing distance 1.1 x 105", or 115" (about 9.6 feet).

When setting up the HC6000 side by side with the HC5000, the first thing that becomes obvious is that the HC6000 delivers a much more significant actual contrast improvement than you'd imagine from the marginally increased spec rating (13,000:1 over 10,000:1). This is due in part to the improved native contrast, and in part to a much more rapid dynamic iris. On the HC5000 it could take up to a second for the iris to fully adjust to a change in the average light level; on the HC6000 the iris adjusts in no more than 1/10 second. Practically speaking, the action of the dynamic iris is undetectable.

The overall effect is that black levels appear deeper, colors are better saturated, and the image looks even sharper and more three-dimensional than it did on the HC5000. You may recall that the HC5000 was found to have as sharp an image as was available in 1080p products under $10,000 last year. So an improvement in apparent sharpness on the HC6000 is noteworthy indeed. In short, despite the fact that on paper the HC6000 appears to offer modest changes to the HC5000, the truth is that the apparent dynamic range, color saturation, and image sharpness is improved considerably more than the specs would lead you to imagine.

Mitsubishi faces a more interesting marketing challenge this year with the HC6000 since its 13,000:1 contrast ratio does not stand out as exceptional among the competition. The Sanyo Z2000 is rated at 15:000:1, the Panasonic AE2000 is at 16,000:1. Beyond those, and into the stratospheric ratings race, we have the Sony VS60 at 35,000:1 and the Epson Cinema 1080 UB at a phenomenal 50,000:1. The problem is that these contrast ratings don't tell us anything about what these units will look like when put up against one another. The Epson 1080 UB's 50,000:1 contrast spec is based on the activity of the dynamic iris, but it has a native contrast ratio of 4,000:1. How will it look against a product with a more conservative contrast rating? Only time will tell.

Furthermore, there is the practical issue of having a modest amount of ambient reflected light even in a dark room. Unless the walls, floor, ceiling, and furnishings are very dark and non-reflective, the light from a projection screen will be reflected back onto the screen by the surfaces in the environment. This cuts the maximum contrast potential of a projector in a hurry. Once we get into actual contrast ratings of 10,000:1 or more, the room environment becomes a significant factor affecting what you see on the screen. Since most consumers are using living rooms or family rooms as their viewing space, the option to render everything in the room dark and non-reflective, just to get maximum contrast on the screen, is not practical. Buying a super high contrast projector and putting it in a typical living room is like buying a high performance sports car and driving it around on city streets-yes, the muscle is there, but you won't ever experience the performance it is capable of.

Note: 5-Star Rating Delayed. It is clear that the HC6000 will get a very high score in all four categories (Performance, Features, Ease of Use, and Value), as did the HC5000 last year. It will be added to our list of Highly Rated Home Theater Projectors. However, we have not yet tested several of the new 1080p models to be released in the next few weeks. So it is not possible to assess its value rating vis-a-vis the competition until we've had a chance to evaluate them. We also want to see where street prices will settle in once everything begins to ship. So this year we are going to withhold our 5-star ratings on all 1080p models until we've had a chance to see them side by side and their street prices are known.

Despite the modest looking improvements in the specifications, the HC6000 is clearly a better projector than the HC5000, which itself was an outstanding product. If you were looking at them side by side without knowing the specifications, you could not be faulted for guessing that the HC6000 is double the contrast of the HC5000. With the higher contrast, the apparent sharpness of the image is improved along with incrementally refined shadow detail.

In addition to the precision image quality, the HC6000's extremely quiet fan and ideal lens configuration for easy rear-shelf installation will appeal to a wide variety of consumers no matter what size viewing room they have.

The HC6000 should compete strongly in the home theater market, just as the HC5000 has done during the last twelve months. Based upon what we can see at the moment in the array of 1080p competition, it looks to be fairly priced considering the image quality and features that it delivers.

On a personal note, I must admit I am much more enthused about this projector than I thought I would be. In a very interesting way, the whole is greater than the sum of its parts. I am having a large party at my home tonight. The HC6000 will be on a ten-foot wide Stewart Studiotek 130 screen, displaying the latest HD-DVD edition of the Eagles Farewell Tour. I am looking forward to showing it off, and I am certain my guests are going to love it.

For more detailed specifications and connections, check out our Mitsubishi HC6000 projector page.