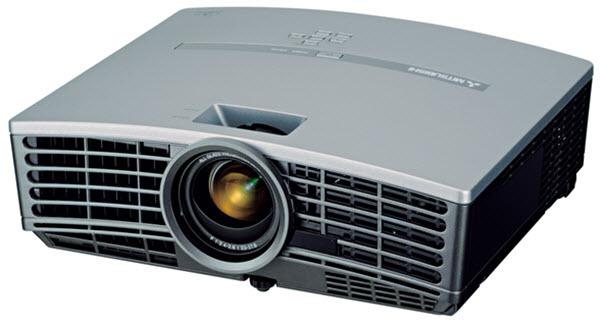 The latest in a line of widescreen DLP projectors to be released by Mitsubishi is the HD4000U which just began to ship a few weeks ago. This WXGA resolution unit (1280x768, 15:9 aspect ratio), is rated at 2000 ANSI lumens of brightness and 2500:1 contrast. So it is both brighter and lower in contrast than most new widescreen models intended for home theater. The reason is that the HD4000U is targeted toward system integrators and commercial multipurpose data/video application use. It is an ideal data projection system to be matched with a widescreen laptop computer, especially for users who are interested in portability and low cost. Mitsubishi does not market this product as a home theater projector, and that is as it should be. Though it certainly can fill in well for part time home use, it would not be our first choice for use as a dedicated home theater projector.

Connection panel: Located on the rear of the unit. Ports include one HDMI, one 15-pin VGA for either computer RGB or component video, one component input (3 RCA), one S-video, one composite video, one RS-232c, one 12V trigger. There is no on-board speaker, so no audio inputs.

The HD4000 is the sixth model to be introduced by Mitsubishi that incorporates Texas Instruments' BrilliantColor. At 2000 ANSI lumens and a mere 6.5 lbs, it is also the brightest portable widescreen projector yet to come to market. The primary story to be told on the HD4000 is the relationship between BrilliantColor and lumen output, and how that relationship affects its optimal usage.

As background, BrilliantColor is a color processing subsystem that can be implemented in a variety of ways with different end results. And in fact it behaves differently on the HD4000 than it does on other DLP projectors we've seen recently that boast the same feature. So the comments regarding BrilliantColor to be made here apply only to its implementation on the HD4000, and are not relevant to any other model.

On the HD4000, BrilliantColor can be turned on or off via menu control. There are actually three settings for BrilliantColor: 0, 1, and 2. At the zero setting it is turned off entirely. At 2 it is fully engaged. And the 1 setting is an intermediate partial activation that in reality is closer to 0 than it is to 2 in its effect on the image.

Meanwhile, the effect of BrilliantColor on color saturation and mid-tone values is much less noticeable. When it is toggled on and off, there is a visible improvement in yellow saturation, but there is no perceptible impact on red, green, blue, cyan, or magenta. The overall impact of this color improvement on the projected image is subtle when compared to the radical luminance variation and its impact on highlights in particular. This implementation is intended to optimize data display in business applications, so it operates quite differently than does a BrilliantColor implementation designed for optimum home theater.

When it comes to data display, the substantial boost in lumen output that comes from activating BrilliantColor is highly desirable. Unless you were in a completely dark room or were projecting a small image for just a few viewers and did not need the lumen output, we would suppose that users of the HD4000 would opt to run with BrilliantColor set on 2 all the time. This is where the HD4000 performs at its best.

Unfortunately, for video use there is a price to be paid for the activation of BrilliantColor. Though the picture is much brighter, there is some dithering in solid midtones and high tones, and also some ringing that reduces definition in the details. These artifacts disappear when BrilliantColor is turned off. They are subtle and barely noticeable with BrilliantColor set to 1, and decidedly more pronounced when it is set to 2. The result is that the video image is its sharpest and most film-like with BrilliantColor off.

The good news is that even with BrilliantColor off, the HD4000 produces ample light for home entertainment use in a darkened viewing space. When optimized for video our test unit generated 503 ANSI lumens, which is more than most video-optimized home theater projectors will produce. So it becomes quite usable as a part time home entertainment projector. And on occasions like a Super Bowl party where you want some lights on and nobody will be fussy about videophile image quality, you can turn on the BrilliantColor feature, set it to High Brightness, and almost triple the lumen output. What you get is a bright, watchable picture that will serve its purpose quite well in that particular environment.

Brightness uniformity was less than ideal on our test unit. On a 100 IRE white field, the brightest area of the image was in the lower left corner and the dimmest in the upper right, with the fall off in luminance across that diagonal being 35%. Overall, the lower half of the image was brighter than the upper half by an average of about 20%.

One of the attractive features of the HD4000 is a 4000-hour lamp life in eco-mode, compared to 2000 hours in standard lamp mode. When you drop the HD4000 into eco-mode, fan noise drops considerably and lumen output is reduced by 23%. However, even in eco-mode the projector will be able to put 1100 real ANSI lumens on the wall. In practical terms this is quite a bright image, and we suppose that many users will find this to be the optimum operating configuration.

Mitsubishi does not promote or market the HD4000 as a dedicated home theater projector. However, many buyers will wonder about its viability for this use due to its attractive widescreen WXGA format and 2000 lumen rating. We agree with Mitsubishi's marketing focus for the HD4000. Its fan noise is within the norm for commercial use, but it is more noticeable than on units designed specifically for home theater. And in a dedicated home theater environment, you'd prefer to have a bit more contrast in exchange for the extra lumen output that you don't really need. One can find products of similar widescreen resolution that deliver higher contrast for less money. Furthermore, its 2x color wheel speed may produce rainbow artifacts and eye strain for some users who are sensitive to it. Finally, the reason home users might pay a premium for a unit like the HD4000 is to get a brighter than average image either to accommodate a large screen or to allow some ambient light. But the only way to get the significant lumen benefit from the HD4000 is to activate BrilliantColor, which on this model compromises the quality of the video image. It certainly works fine for a Super Bowl party, but in our opinion it is an unacceptable trade-off for theater use.

Mitsubishi offers a three-year warranty with the HD4000U, and this includes their Express Replacement Assistance program. This is offered on most of their non-home theater products, and is designed to ensure that you get a replacement unit shipped promptly via 24-hour overnight service in the event your unit fails. For those who cannot afford downtime on their projector, this has been an attractive service. More details are available from Mitsubishi dealers.

Buyers of the HD4000 will be paying a premium for native WXGA resolution and high lumen output in a portable package. It is a unique solution on the market that will be perfect for those who want bright, widescreen data presentation use at the office, as well as portability for multiple commercial venues, and/or part time personal entertainment at home. If we were using it in this manner, we'd activate BrilliantColor to produce bright presentations in our commercial work, and turn off BrilliantColor when using it for video at home. We have given it a high rating for value because for the person who needs this particular type of projector, there is nothing else on the market quite like it.

For more detailed specifications and connections, check out our Mitsubishi HD4000U projector page.