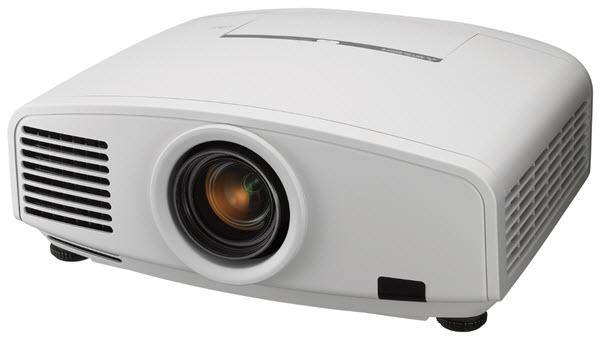 With increasing frequency, commercial data projectors are following the video trend toward widescreen formats. Ever since the early days of VGA resolution, computer monitors and projectors have largely conformed to the standard 4:3 aspect ratio. But within the last year at least 15 models have come to market with the native 15:9 aspect ratio WXGA format, which is 1280x768. Among them is the newly released Mitsubishi WD2000U . This is a bright, widescreen data/video projector for use in conference rooms and small auditoriums as well as college classrooms and lecture halls. It is a highly versatile presentation projector currently selling at street prices around $4000.

Compared to several other 1280x768 projectors currently available, the WD2000U is rather large. The projector weighs in at 18.8 lbs and has a 17" x 13" footprint. The case is a neutral beige, which many prefer for ceiling mounting.

The WD2000U includes powered horizontal and vertical lens shift. The projector features a "lens shift reset" control, which brings the powered shift back to default settings. These default settings place the bottom edge of the projected image at 10% of the image height above the centerline of the lens. From there, the projector can shift the image vertically such that the bottom edge of the image is 51% of the image height above the centerline, or 32% below it. It can also shift the image 15% of the image width to the left, or 15% to the right. This makes ceiling mounts easy, since the entire projected image can be placed well below the lens centerline. The lens shift adjustments can reach both extremes simultaneously, though this will bring about a small reduction in lumen output.

Zoom and focus controls are also powered. The standard lens has a 1.36:1 zoom range, and will deliver a 100" diagonal 15:9 image from a distance between 13.3 feet to 18.1 feet. The power focus control is sensitive and can be finicky; the easiest way to get the projector into perfect focus is to stand very close to the screen, and adjust from there.

If the standard lens does not suit your needs, Mitsubishi offers four optional lenses--a fixed focal length short throw lens, a shorter than standard zoom, a longer than standard zoom, and a very long throw zoom. While these optional lenses are expensive, they are available if required to accommodate your installation needs. Lenses are attached with a bayonet mount, which makes it easy to change them.

The menu system is uncomplicated. Pressing "menu" on the remote or the projector itself brings up a horizontal bar, which then expands into one of the projector's four categories of adjustments. Included are color temperature adjustments (with one user-programmable setting), a black level adjustment which can set absolute black level to 3.5%, 7.5%, or 0%, and all conventional picture adjustments.

A notable feature is the inclusion of a "shutter" option, which allows you to mask out noise that may appear on the edges of a projected image. The shutter is entirely digital, and has separate controls for top, bottom, left, and right masking.

Under the heading "Color Enhancement" is a user-adjustable setting that allows you to set gamma and BrilliantColor levels. Though BrilliantColor is intended to boost color saturation and open up mid-tones, it has a marginal impact on color on this projector. Its most obvious effect was boosting white levels, and it does this in dramatic fashion.

The remote control is not backlit, but it is functionally comprehensive. Aside from the typical source and menu controls, the remote has the ability to control your computer's mouse if the computer is connected via USB. It also includes a laser pointer, page up/down functions, zoom and focus controls, lens shift controls, and an aspect ratio button to cycle through the projector's options. These include 4:3, 16:9, FULL (which is 15:9), and NATIVE.

In addition to the standard inputs on the richly populated connection panel is an RJ45 networking port. This allows you, with the use of included software, to completely control and monitor the projector's functions - including menu adjustments - from a PC or a remote location elsewhere on the network. There is an optional wireless adapter which we did not get a chance to test, as it is not included in the standard projector package.

The WD2000U is rated at 27dB audible noise, and it is in fact as quiet as many home theater projectors. If you've had experience with the louder installation projectors of the past, this will come as welcome advance in the state of the art.

The WD2000U has a filter-free design, which cuts down on maintenance and costs in the long run. Since there are no filters to clean, the only routine maintenance you will have to perform is changing the lamp. And you won't have to do that except on rare occasions if you operate in eco-mode, which claims a 5000 hour lamp life as compared to 2000 hours in full-power mode. Eco-mode drops lumen output about 28%, from 2251 ANSI lumens to approximately 1600 ANSI lumens in presentation mode. The replacement lamp costs $495 - so if you are putting a lot of hours on your projector, there's a compelling economic reason to stay in eco-mode unless you really need the extra light.

The physical lens shift features should eliminate the need to use keystone adjustments in most installations. However, horizontal and vertical keystone adjustments are there if you need them. They impart a slight bolding effect to text, and introduce some pixelation in vertical and horizontal lines, but otherwise there is relatively little effect on overall image quality.

Not only does the WD2000U have a three-year warranty, but during that time it is covered under Mitsubishi's "Express Replacement" program. This helps to get a functioning projector back to you on an expedited overnight shipment basis. If you have a mission critical application and cannot be without a projector for long, you may find this feature of the Mitsubishi warranty policy to be particularly attractive.

Our test unit measured 2251 ANSI lumens when optimized for data presentation, which is where the WD2000U excels by delivering a bright, sparkling image. Contrast on this unit is rated at 2000:1. In reality, contrast is more than ample for data presentation, and with some tweaking it can provide a pleasing video image as well. Black text on a white background appears dynamic, and pops off of the page.

Color is well-saturated and accurate. The projector has a 5-segment color wheel--red, green, blue, white, and yellow--which allows for maximum light output without sacrificing much in terms of color accuracy. If your situation calls for precise, exacting color standards, the WD2000U has a user-defined color temperature setting with independent red, green, and blue controls which can be calibrated to suit your needs.

The WD2000U is designed to display native WXGA signals, or 1280x768. However, it will also display standard 4:3 format XGA (1024x768) in native format as well. For the sharpest pictures, use these two native formats. This projector will compress a higher resolution SXGA signal, but the resulting image is slightly fuzzy due to the compression. On the other hand, lower resolution signals such as 800x600 SVGA can be scaled up to 1024x768 with quite satisfying results.

While the WD2000U is designed as a data projector, its high brightness and reasonably high contrast specifications make it look as though it has good potential for large screen home theater use.

In addition, the WD2000U has a 2x rotation speed color wheel in it, which means that those susceptible to DLP color wheel rainbow artifacts will very likely see them on this projector.

Video scaling is unimpressive, with softness introduced into the image when upscaling 480p content. Deinterlacing of 480i content is, in a word, messy. Deinterlacing artifacts such as jagged edges and "shimmering" details were common, and motion judder was distracting. If you do plan on using the WD2000U with video content, we recommend using a progressive scan DVD player, if not upscaling the signal to 720p before introducing it to the projector.

For these reasons, the WD2000U is not an attractive solution for dedicated home theater. There are other 1280x768 home theater projectors on the market which can deliver similar video optimized lumen output, but with higher contrast, deeper black levels, and a higher speed color wheel, all for much less money. While the WD2000U can deliver a fine video image for commercial purposes, video is clearly a secondary application usage for this model.

The Mitsubishi WD2000U is a feature-rich widescreen data projector with impressively high lumen output. It would fit well in a large auditorium or college lecture hall, or any situation that requires a large screen or compensation for ambient light. Videogame buffs will appreciate the low ambient noise levels and lens shift. Those using the projector in a large-scale installation will enjoy 5,000 hours of lamp life in low power mode and a three-year warranty. However, those looking for a video projector or a large-scale home theater machine should probably look elsewhere. But if you have a need for widescreen data presentation, the WD2000U is worth every penny of its asking price.

For more detailed specifications and connections, check out our Mitsubishi WD2000U projector page.