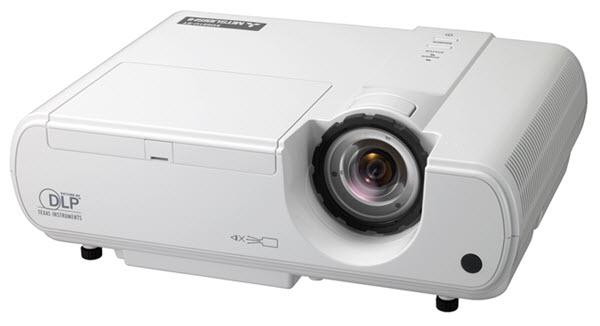 Hot off the Mitsubishi assembly line is the XD-221U, the latest addition to their education line-up. This 7 pound, 2300 lumen portable powerhouse has all the usual bells and whistles, as well as some brand new ones. The onboard ten-watt speaker has the ability to mix two separate input sources, allowing for some truly creative classroom lectures. At street prices under $800, it won't break any budgets, either.

High Lumen Output. Rated at 2300 lumens, the XD221U promised to be bright - and it is. Our test sample measured a hair under 1960 lumens in Presentation mode with the lamp on its bright setting. For those more interested in extending lamp life, Eco-mode still produces 1650 lumens and adds up to 25% to the life of your lamp.

Low maintenance. The XD221U is extraordinarily low maintenance. It has a filter-free design thanks to its sealed light path, which keeps dust out of critical projection elements. It also has a 4,000 hour lamp life when in Eco-mode. To put that number in perspective, 4,000 hours works out to over 650 six-hour school days. Since schools in the United States average 180 school days per year, this means the XD221U can be safely forgotten for almost four years. And once that lamp finally goes out, the XD221U has a top-changing lamp, so it's not necessary to remove it from a ceiling mount.

10W speaker with Audio mix. The XD221U's ten-watt speaker packs a serious punch. Using our standard test tone from a difference of three feet, the speaker was putting out 77 decibels, which is loud enough to be uncomfortable if you're sitting too near the projector. While sound quality is still slightly tinny and lacking in bass, the volume does have an allure all its own.

The XD221U has two 1/8" audio inputs, which is not in itself unusual. However, what it can do with these two inputs is something we've never seen before. The two can be mixed - both can be enabled at once, and a slider in the Advanced menu can be adjusted to make one louder than the other, if you prefer. This allows one jack to be used for the video source and the other for an external microphone. Suddenly, instead of fighting to be heard over the projector, the instructor can amplify their own voice using the projector's speakers.

Quiet fan. Normally, bright compact projectors are uncomfortably loud and expel a lot of heat, making them decidedly unpleasant to be around. The XD221U, however, is only 26dB in low lamp mode. This makes it a great choice when the instructor needs to be heard clearly over the sound of the projector's operation.

Monitor passthrough. The projector has a monitor passthrough, allowing for more flexibility when using a computer not built to drive two monitors at once. While dual monitor capability is becoming more commonplace in personal computers these days, it is still a welcome feature.

Security. A password feature can be used to protect the active input as well as the menu system. This can keep the projector's settings safe from inquisitive or mischievous students. Physical security is not lacking, either - the XD221U has locking points for a Kensington lock as well as a simple cable lock. All in all, it can be locked down fairly tightly, ensuring some peace of mind.

Express Replacement warranty. Possibly the only thing that is unacceptable with an education projector is extended downtime. If a projector is disabled for whatever reason, it is imperative that it be up and running again as soon as possible. Mitsubishi has thought of this, and as a result their warranty includes overnight replacement of any projector in need of repair for the full three years of the warranty. So while they cannot guarantee that their projector will not break, they can guarantee that it will not remain broken for very long.

Color brightness. The XD221U has a white segment in its color wheel which boosts the brightness of highlights significantly. In fact, turning BrilliantColor off - which effectively disables the color wheel's white segment - drops lumen output by over 60%. The white segment, when active, does not boost the brightness of color the same way that it boosts white, resulting in an unbalanced picture where white is much brighter than colors are. In fact, we had some difficulty navigating the menu system in the projector's brightest mode, because the red highlighting on the active line item did not stand out very much.

Edge to edge sharpness. While it was not often noticeable, we did see a slight patch of softness when using a full screen of 10-point text. In the bottom center portion of the image, some text was blurry while the rest of the image was in perfect focus. This should only concern those who plan to use the XD221U with detailed documents full of small print; more presentation-friendly content like PowerPoint slideshows will not suffer much, if at all, from this flaw.

Normally, people think of projectors as visual aid products. The XD221U is one of the first that can give teachers serious help in the audio department, too. With the XD221U's sound-mixing capabilities, teachers can be easily heard over any other content being played, leading to more effective lessons and fewer confused students. Of course, it is an outstanding projector in other areas, too - such as its exceptional lamp life and otherwise-nonexistent maintenance requirements. The XD221U has just been released as of last month. It can be found for less than $800, making it a great bargain. If it sounds like it would fit your needs, call it in for an audition and give it some serious consideration.

For more detailed specifications and connections, check out our Mitsubishi XD221U projector page.