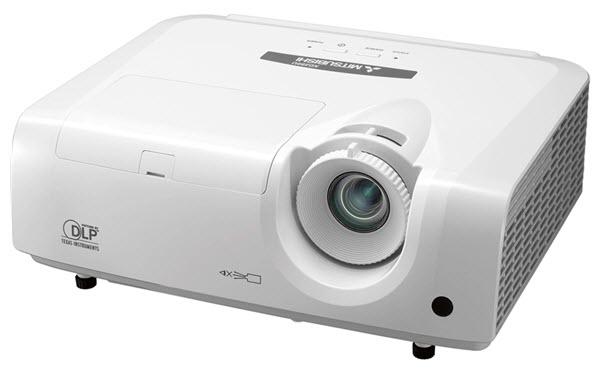 The XD280U from Mitsubishi is a new XGA DLP projector for the classroom. It incorporates several advanced features that educators will appreciate with a low operating cost that administration will love. While the manufacturer's description of "micro-portable" is a bit of a stretch, the projector has a small form factor and weighs less than eight pounds. It is an ideal choice for either ceiling mounting or A/V cart use. The XD280U is a great projector that's designed with the classroom in mind.

Brightness. With the projector's Color Enhancer set to the default User mode, and the lamp set to Standard, our brightness testing returned a screen average of 3,070 lumens, nicely matching the published claims. The User mode stores the settings you make on the Image menu, but out of the box its default settings are nearly identical to Presentation mode, with the full brightness typically used for a computer display input. A pleasant surprise was the Low lamp mode, which is purported to double the lamp life from 3,000 to 6,000 hours but only reduced light output by 19%, which measured 2,500 lumens in this mode. Presentation mode measured 3,010 lumens. Standard mode, which measured 2050 lumens, reduces image brightness somewhat compared to presentation mode but improves contrast and color. Theater mode reduced brightness to 1,200 lumens with lamp on full power, but offered the best color and contrast performance of any image mode.

Audible Noise. We did not find any published specifications for fan noise, but we measured 36 dBA at 4 feet in Standard lamp mode. This is an acceptable noise level. At a small conference table with the users sitting nearby, it may be desirable to use Low lamp mode, which reduces fan noise to 27.5 dBA. This will reduce lumen output by 19%, so a smaller screen size - or more thorough light control - should be used.

Throw angle. There is no lens shift available, but at a projection size of 60" x 80", the fixed image offset puts the bottom of the image at 9" above the lens centerline, or 15% of image height. This is convenient for both ceiling mounting and tabletop use. Wired Networking. The XD280U is networkable via an RJ-45 port, and a visual public address feature allows announcements to be typed in via software and distributed to every projector on the network. Functions such as power and status can also be checked or controlled by an administrator. We have even seen third-party inventory control or anti-theft applications that detect when a projector is disconnected from the network and send a warning to staff.

Low Cost of Ownership. The price of the Mitsubishi XD280U is competitive with other projectors in its class, resolution and brightness level. The projector has a lamp life of 3,000 hours in Standard mode, and a remarkable 6,000 hours in Low lamp mode without sacrificing too much brightness. Replacement lamps cost roughly $300, which is not out of line for a projector in this class. This combination reduces maintenance and the cost of replacement lamps, making the XD280U a great long-term value proposition.

Ease of Maintenance. The XD280U has no filter to change or clean, and the lamp is accessed through a door in the top of the projector so it can be changed while mounted or set up on the table without moving it. Of course, with its long lamp life this should be rare event.

Audio. The built-in 10W amplifier and speaker produced good audio, and we were able to turn it up fairly high without noticeable distortion. This could be a cost saver, eliminating the need for separate speakers and amplifier in a smaller room. The 3.5mm audio output, however, is stereo and its gain follows the volume control.

Connectivity. The back panel has many connections that will be useful in a typical classroom. In addition to the usual VGA inputs, the HDMI connector is welcome as a hedge against compatibility problems with future source equipment and laptops. The RS-232 control port might not get used often in a school, but the RJ-45 LAN port probably will. And the local monitor output will be appreciated by teachers who use the projector on a table or desktop.

Brightness Uniformity. The only disappointing result of our brightness testing was a 61% uniformity reading. If you are looking for it, this is visible as a change in shading on a color field such as the blue sky of a desktop image, but it would probably not bother anyone in day-to-day use in a classroom setting. Nevertheless, we usually see better uniformity on products in this class.

Color Rendition. We found it difficult to attain realistic color renditions when viewing photographs; they appeared to have too much "punch" and color saturation. This issue was probably not helped any by the lack of uniformity in image brightness addressed in our test results above. The situation improved when the color temperature was set to "high", and a careful use of custom settings could probably improve things even more. The Theater mode is better balanced for photography, but it is not bright enough to use in a typical classroom unless the lights are dimmed and window shades are drawn.

Every summer there is a heated competition between projector manufacturers striving for a bigger share of the back-to-school equipment purchases. Now that the rush is over, education buyers who still have a budget will be shopping carefully, and Mitsubishi has an entry that is worth looking at. The XD280U is on par with the competition in its class in nearly every respect, including price. However, it is the 6000-hour lamp life that will catch the attention of those who look beyond the initial price and think about the long-term cost of ownership. For educators and purchasers on a budget, the XD280U is worth a close look.

For more detailed specifications and connections, check out our Mitsubishi XD280U projector page.