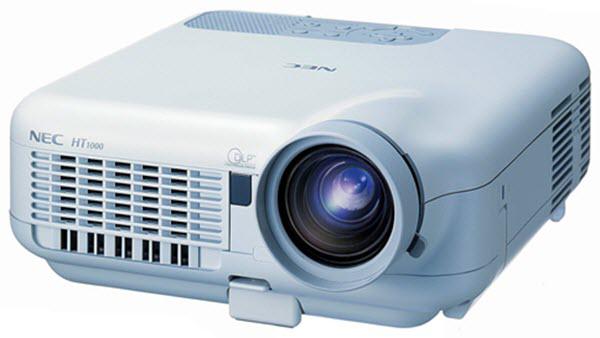 Subscribe
Evan Powell
Evan Powell
Evan Powell
NEC HT1000 XGA DLP Projector
Price
$4,495 MSRP Discontinued
Just when we were about to get used to the notion of an 1800:1 contrast ratio as the "leading edge" in contrast performance for digital projectors, now comes NEC's startling announcement of the new HT1000 with a breathtaking 3000:1 contrast rating. This is NEC's first digital projector that is designed specifically for the video performance market. It is billed as a "Residential and Commercial Entertainment Projector" on the preliminary spec sheet. And as you can imagine, it will make a big splash just on the strength of its remarkable contrast rating alone.

The HT1000, the first of a line to be known as the Showcase Series â ¢, is scheduled to commence shipment in about six weeks. However, we have had a pre-production unit in the lab for the past week, and we can give you some thoughts on our initial experiences with it.

Product Overview (based on preliminary specs)

The HT1000 is a native 4:3 format DLP-based projector which uses the new standard XGA-resolution (1024x768) 12-degree high contrast DMD chip. It is rated at 1000 ANSI lumens of brightness in normal operation. It can be reduced to 800 ANSI lumens in eco-mode to extend lamp life and reduce fan noise in operation. The specifications indicate a contrast ratio of >2000:1 standard, and 3000:1 with the unique IRIS feature activated.

The IRIS feature is simply a mechanical adjustment that lets you stop down the lens aperture by adjusting a lever on the barrel of the lens. You give up about 20% in lumen output, whether you are in normal or eco-mode operation, and gain a visible boost in contrast. This feature works. We achieved the best results with the lens aperture closed down to the minimum setting, confirming once again that sacrificing lumen output in favor of contrast gain is always a safe bet.

Contrast is also further enhanced on the HT1000 with NEC's new "Sweetvision â ¢" technology. This is a proprietary chip developed by NEC which the company claims adds additional digital contrast enhancement resulting in images that are more vibrant, colors more realistic and blacks richer in detail.

The connector panel features a variety of inputs including one DVI-D, one RGB, one set of 3 RCAs for component, one S-video, one composite jack, a PC card reader, and four mini-audio jacks. (The HT1000 has two 2-watt speakers on board, and separate audio inputs for each video signal source.) Outputs include a screen trigger and one PC control.

The lens is manual zoom and focus. From a throw distance of 12 feet from lens to screen, it produces an image that is 76.5 to 92 inches in width. That translates to a 16:9 format image that is a minimum of 89" diagonal to a maximum of 105", and a 4:3 image that is minimum of 96" to a maximum of 115" given the stipulated 12 foot distance. Allowing for the length of the projector itself plus a one foot clearance for heat dissipation in the rear, the HT1000 will comfortably produce a 100" diagonal 16:9 image in a room that is only 14 feet deep.

As home theater projectors go the HT1000 is relatively small and compact, weighing just 7.1 lbs. Inclusive of the lens it is only 12.6" long and a bit over 10" wide. Its off-white casework is ideal for unobtrusive ceiling mount installation.

When we fired up the HT1000, it was evident from the outset we could characterize its performance in one word--WOW. This is an exciting projector, and one destined to be among the elite of the home theater projectors in the months to come. Color accuracy is dead-on, saturation is beautiful, contrast is unmatched, black levels are rich and solid. Internal signal processing is superb, and even S-video from a cheap DVD player is stunning. For the money it is the best single-chip DLP projector we have yet seen. From our perspective the HT1000 looks like an outstanding achievement.

Keep in mind that all projectors have limitations and this one is no different. Most users will want to operate in eco-mode, which extends the lamp life from 1500 to 2000 hours. It also cuts fan noise from noticeable to very low. Eco-mode cuts the lumen output by 20%, from a rating of 1000 lumens to 800. Furthermore, most users will want to use the IRIS aperture restriction feature to boost contrast. On the pre-production unit we have, that feature cuts lumen output by an additional 20%, which brings it down into the 600 to 700 lumen range.

Therefore, if you are operating in eco-mode with the IRIS set at minimum aperture (maximum contrast), we would not recommend pushing a 16:9 screen size beyond 100" diagonal. The HT1000 will certainly display a larger image, but as you increase the square footage of the screen you reduce the image quality. It would be a shame to compromise the beauty of this image by stretching it beyond its optimum size.

Another issue to bear in mind is that this is a standard 4:3 native format XGA projector. That means it produces a 16:9 image in a pixel matrix of 1024x576, with black bars falling at the top and bottom of the image in the 4:3 display.

The contrast on this projector is high enough that the use of high contrast (gray) screen material is not necessary. However we used it with the Stewart Grayhawk with truly beautiful results.

Where does the HT1000 fit in the market?

The retail price on this product is $5,495. After factoring in a consideration for typical street discounts, the HT1000 will compete most directly with the Epson TW100, setting up a classic competitive battle. They are both outstanding projectors, but each has a key strength that is the other's weakness. The HT1000 holds a major advantage over the TW100 in contrast performance, as it does with just about every other projector on the market at the moment. Low light scenes and shadow area definition/separation are superior on the HT1000. It also has an edge in color saturation, which is not a typical advantage for DLP as compared to LCD products.

Related to this is the fact that the TW100 can display an HDTV 720p signal in its native format with no scaling at all. This gives the TW100 an edge in the area of image clarity and sharpness for those who anticipate watching a lot of 720p HDTV.

The TW100 is also the brighter of the two projectors, which is entirely counterintuitive given the HT1000's rating of 1000 ANSI lumens vs. the TW100's 700. But the fact is that the TW100 is visibly brighter in a side-by-side comparison with 16:9 material. There are several reasons for this. First, the HT1000's rating is based on light output in its full 4:3 format using all of the light potential from the DLP chip. In 16:9 mode on the HT1000, 25% of the light from the DLP chip is blocked to produce the top and bottom black bars that allow the 16:9 format image to be displayed. After that, putting the unit into eco-mode and setting the IRIS to minimum both act to further constrict light output. You end up with a jaw-dropping image certainly. But it is not as bright as the TW100.

Lamp life on the TW100 is 3000 hours vs. the HT1000's 2000 hours in eco-mode. In this case however we would not suggest that you give much weight to this in your decisionâthe other performance factors tower in importance over this one.

In comparing these two projectors we would say that there are buyers who will still prefer the TW100 due to the latent strengths just noted. The TW100 is an excellent product and we have recently given it a strong recommendation. However, the HT1000 represents new and formidable competition. If you are contemplating the purchase of a TW100 we would advise to consider this one as well. We do not know how street prices will shake out on the HT1000, and that will end up being quite a significant factor in the equation.

We must reiterate that the comments herein are based on a preliminary review of a late-edition pre-production unit. We will update our comments and post a final review once we receive and evaluate a production model. Final recommendations will be based on price/performance criteria once it becomes clear how relative street prices will evolve.

However, from a performance perspective, based upon what we have seen thus far, the HT1000 represents a major stride forward in contrast performance, color saturation, and shadow detail. It will have an impact on the home theater projector marketplace that few new products are able to generate. Its competitive presence will be felt most acutely by vendors with premium home theater products selling in the general street price range of $4,000 to $4,500, including the Epson TW100, the Optoma H55, and the InFocus Screenplay 110.

The HT1000 should have less impact on sales of the Sanyo PLV-70 since they are two entirely different types of machines. The higher resolution native 16:9 widescreen format PLV-70 is much brighter and thus the better solution for larger screen installations. It delivers a higher resolution picture from both DVD and HDTV. It is also more tolerant of ambient light, so it functions well as a multi-purpose entertainment room solution. Conversely, the HT1000 is best suited to a darkened, dedicated home theater.

Furthermore, the HT1000 should have little sales impact on the much lower priced Sharp PG-M20X. Street prices on this unit are already so low that few buyers in this budget range will be willing to ante up the $2,000 or more that will be needed to get into the HT1000. Therefore the superb value for the money represented by the Sharp M20X remains unaffected by this release.

It is more difficult to predict how the HT1000 will play against the PLUS Piano Avanti HE-3200. With a selling price of $3,299, the Piano is expected to fall $1,200 to $1,500 below the street price of the HT1000, although supply and demand for the HT1000 could alter that range up or down. The HT1000 will appeal directly to the Piano's typical buyerâthe videophile not so much interested in big lumen performance as exquisite video quality on a not-too-big screen for not-too-much-money. The HT1000 is superior to the Piano in lumen output, color saturation, and contrast, and many will believe it is worth the extra investment. We would not be surprised to see buyers who are contemplating the Piano opting instead to scrape together the incremental cash to step up to the HT1000.

We will have more to say about the HT1000 leading up to the time it begins to ship. Consumer demand will be heavy, and dealers will be taking advance orders. The HT1000 is destined to take its place among the elite home theater offerings in the marketplace. From what we've seen so far it will establish NEC as a formidable competitor in the premium-quality home theater projector arena.

For more detailed specifications and connections, check out our NEC HT1000 projector page.