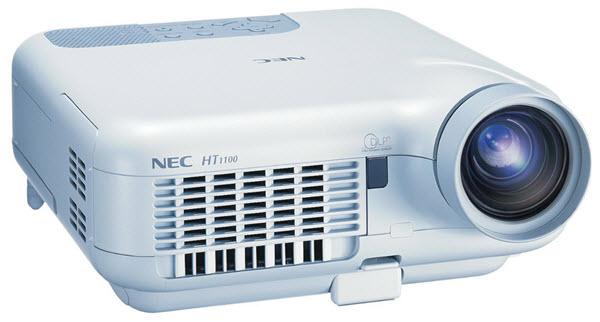 Eighteen months ago NEC released the HT1000, the company's first digital video projector built specifically for the home theater market. With potential contrast up to 3000:1 it quickly captured a lot of attention. Due to its exceptional video performance it has been on our Highly Recommended list since its release.

NEC has recently announced the impending release of the HT1100, which is an upgraded edition of the HT1000. Like its predecessor, the HT1100 is a native 4:3 format XGA resolution DLP projector. However it is packaged with an optional anamorphic lens that transforms the unit into a native 16:9 video projector. The final inventory of the HT1000 is being sold through and this model will be discontinued. The new HT1100 will commence shipments in April.

Lens and throw distance. Manual zoom/focus, with moderate throw distance. A 100" diagonal 4:3 image is attained with a throw distance between 10.3 and 12.4 feet. The optional anamorphic lens compresses the image vertically, so has no impact on screen width in 16:9 operation.

Connection panel. One DVI-D w/ HDCP, one 15-pin VGA, one set of 3 RCA component, one S-video, one composite video RCA, one RS-232c for PC control, one screen trigger, one PC card slot, three audio inputs for onboard speakers.

The upgrades incorporated into the HT1100 are as follows:

1. The color wheel rotation speed is increased from 4x on the HT1000 to 5x on the HT1100. While a 4x rotation speed is sufficient to eliminate DLP rainbow artifacts for most viewers, the incremental speed on this new unit will further reduce the chances of being bothered by them.

We were enthused with the overall image quality of the original HT1000, and we remain so with the new HT1100. The refinements that have been built into this new model are certainly welcome improvements.

The key to the value of the HT1100 is the anamorphic lens. Without this lens, the HT1100 is a standard XGA resolution projector that is without question the best of all the DLP-based XGA resolution video projectors on the market. But it is also priced higher than most folks would care to pay for a standard XGA class machine. However the addition of the anamorphic lens into the equation for just $200 substantially alters the price/performance proposition.

In anamorphic mode, you view 16:9 material in its proper aspect ratio with the full lumen and resolution capability of the native 4:3 format 1024x768 display. Essentially the 16:9 image is scaled onto the display such that it is stretched vertically. Without the anamorphic lens to correct it, people would look taller and skinnier than normal. The anamorphic lens optically compresses the digitally distorted 4:3 image into a 16:9 format, so that everything once again looks normal.

Why bother? There are several benefits. First, the alternative to getting a 16:9 format on an XGA projector is to use just a portion of the XGA display, which is 1024x576. The remaining 192 lines are blacked out, and they are seen as black bars on the screen. That means 25% of the pixels, and 25% of the potential light output of the projector is disabled. By using the anamorphic lens you use 100% of the pixels and 100% of the light output, and you end up with no black bars above or below the 16:9 image.

A further benefit is that the pixels are compressed, so that visible pixelation is reduced more than is normal in this resolution class. In point of fact, visible pixelation disappears entirely at a viewing distance of just 1.3x the screen width.

Most users will want to operate the unit with the anamorphic lens in place all the time. However, for those who want to get the largest possible 4:3 image for video games, computer display, or classic movies that were made in 4:3 such as Citizen Kane, Casablanca, Gone with the Wind, etc., you can easily swing the hinged anamorphic lens out of the projection path, and return the HT1100 to native 4:3 mode.

In essence, NEC has created a product that is in a class by itself in the world of video projectors. The HT1100 combines the highly desirable 5x speed color wheel, very high contrast, excellent scaling and video processing with an anamorphic solution that transforms the XGA DLP chip unit into a 16:9 display. An anamorphic lens can be added to any native 4:3 format projector, but buying such a lens independently can run up to $1,000 or more. And most native 4:3 projectors do not have the latent video processing capabilities of the HT1100. So this particular package represents a rather unique confluence of features.

The anamorphic lens does make installation a bit more complex than it otherwise would be. While it is not difficult to attach (four set screws and a support bar do the trick) once you attach the lens to the HT1100 you can no longer adjust the focus of the unit. So the projector and screen must both be positioned and the projector optimally focused prior to introducing the anamorphic lens. The lens must be squared up exactly to avoid any optical distortion in the image, and it takes some experimentation to get it right. But once it is set you don't need to worry about adjustments in the future since the lens is on a fixed hinge; you may either deploy it or rotate it out of the way without detaching it from the projector. Unlike some anamorphic lenses, when you want to deploy this one there is no guesswork as to where the lens should be.

Overall, the HT1100 and its anamorphic lens constitute a unique price/performance option as far as video projectors go. It is 25% higher in physical resolution than competing 16:9 units that feature the Matterhorn DLP chip, which is native 1024x576. It also tends to outperform them in either lumen output, contrast, or price, and sometimes all three.

The real competition is between the HT1100 and the most aggressively priced Mustang/HD2 DLP machines, such as the BenQ PE8700. This unit is native 16:9, with a resolution of 1280x720. It has the benefit of being able to display HDTV 720p in native format without scaling, and it has 17% more pixels on the display which gives it an edge with HDTV 1080i acuity. It is easier to install since you don't have the issue of the anamorphic lens to contend with. And it has a standard 3-year warranty.

On the other hand, for the display of XGA computer signals, the HT1100 does it in native format whereas the PE8700 needs to scale them, losing image sharpness in the process. (Clean scaling of data is always more of a problem than the scaling of video.) So if you plan to do any Internet or other computer-based work on your big screen system, this is a major factor to consider. The HT1100 also has an edge in contrast over the PE8700.

Both of these projectors are best viewed on white screens. If you opt for the BenQ PE8700, you should select a 16:9 format screen. If you choose the HT1100, you can go with either a 16:9 or 4:3 screen, depending upon how you want to view your 4:3 material. No matter what, 16:9 images will always be the same screen width on the HT1100. The desired size of the 4:3 image is the variable you need to consider. It may be either the same height as the 16:9 image and centered in the middle of the screen, or the same width as the 16:9 image and taller.

As far as video projectors go, both of these units are superb price/performers. We cannot recommend one over the other, as they have different strengths and attributes. They are in the same ballpark as far as street prices are concerned, so price is not a serious factor in deciding between them. Rather, give careful consideration to the type of viewing you plan to do, and select the most appropriate model for your needs.

For more detailed specifications and connections, check out our NEC HT1100 projector page.