Every once in awhile a new company arrives on the scene with an exceptional product. Such is the case with Oppo Digital and the introduction of its OPDV971H digital DVD player, also referred to as the Oppo 971 in this article.

So who is Oppo? They certainly are not a household name and with good reason as Oppo is a newly created North American branch of BBK Electronics of China, a giant in the manufacture of consumer electronics, employing 12,000 people worldwide. So while Oppo is a new name, the company and the technology behind it are quite substantial.

Oppo's task in North America is to build the Oppo brand by focusing on quality and customer support. You will not find this product at a local store just yet. Oppo wants to build demand by first establishing its reputation. To do this, it wants some firsthand experience with its customers and the fastest way to get it is to sell direct. (Update September 12, 2005: Oppo has begun to sell direct to some selected dealers. See Where to Buy below.)

So what makes the Oppo OPDV971H DVD player so hot? While its form factor is sleek with a low profile and uncluttered look, its digital performance is without equal at apparently any price based on the 2005 DVD Player Benchmark shootout by Secrets of Home Theater and High Fidelity that ended last month. The Oppo OPDV971H digital output (DVI) beat 39 other DVD players from 11 other companies including Panasonic, Pioneer, Sony, Toshiba, Samsung, LG, Onkyo, Teac, Oritron, Harmon Kardon, and McCormack. The price range of these products was $199 to $13,000. Guess who sells for $199 . . . Oppo. (Scroll down to see specs and photos.)

Digital Basics
So what is a digital output? If you purchased a digital television or monitor, you no doubt expected to see a digital image. If you knew that

DVD was a digital recording, you probably assumed that when you connected your DVD to your digital television that you were now enjoying the benefits of digital TV. Not necessarily so.

DVD players can deliver several types of video including composite video, s-video, component video (YPbPr), and DVI or HDMI. The video types supported will depend on the DVD player. The first 3 types mentioned are analog sources. Although your DVD is digital and your TV may be digital, if you are using composite video, s-video or component video (YPbPr), then your video information is being converted from digital to analog and then from analog back to digital. This double conversion is the primary source of video artifacts such as ghost outlines that appear along lines and edges of objects in an image, ringing that appears as a series of narrow bands emanating from the edges of objects, and the noise that appears as pixel instability.

The bottom line is every time a conversion is made from digital to analog or analog to digital, the quality of the image will suffer. It is unavoidable. The degree of image quality loss is a function of the encoding quality of the DVD, and the design of the DVD player and your television or monitor, and the cable that connects them.

Although much has been done to minimize these problems over the years, the first great step forward in delivering high quality video was the introduction of DVI (Digital Visual Interface) and later HDMI (High-Definition Multimedia Interface). A DVD player with a DVI or HDMI output has the ability to deliver a digital image to a digital television or monitor provided it has a DVI or HDMI connector. This digital to digital transfer eliminates the need to convert to analog thereby avoiding much of the quality issues associated with analog viewing. Going digital to digital has been the Holy Grail for fine viewing. At the moment, it is the closest we can get to the original image. The only holdup to greater performance is the resolution and quality of the DVDs.

Resolution
Today's DVDs are recorded in 720 x 480 resolution and today's digital televisions all support a higher resolution. To take advantage of this higher viewing resolution, it is necessary to upscale the image. This means resizing the image to fit your television.

Upscaling is a science unto itself and nearly all projectors, flat screen LCDs, plasmas and projection TVs have the video processing necessary to upscale an image; however, the issue is quality, as not all video processors are created equal. The objective in scaling is to make something out of nothing. If the DVD is a 720 x 480 image and your television is any resolution higher than that, such as 852x480, 1024x576, 1280x720, 1365x768, 1400x788, or 1920x1080, then clearly there is a lot of image to create that doesn't exist on the DVD. The quality of your image will depend on the quality of the video scaler used to fill those holes.

Performance
We review projectors and flat panel displays for a living and I never cease to be amazed at the life-like quality of digital video. The Oppo 971 did not disappoint. DVI image quality is excellent with the option to select 480p, 576p, 720p, or 1080i.

In our testing of analog video with the 971, we saw no apparent decoding artifacts and analog video quality was better than we expected. Generally there are noticeable differences between the various analog video sources with those that provide the most information yielding the best images. We could not easily distinguish between them. This may be due in part to Oppo's implementation of the Genesis FLI2310 chip that handles format conversions, upscaling and aspect ratio control and incorporates Faroudja's Emmy award-winning DCDiTM video processing. Some of this may have also been due to the quality of the Samsung display that we used to view the output.

If you do not have a digital projector or flat screen television, then a DVI or HDMI DVD player is of no value to you other than to give you the ability to upgrade to a digital television in the future. In the case of the Oppo 971, it is a small price to pay especially considering the quality of the analog video. It too was the best we have seen. If you're planning to use the digital capabilities of the Oppo 971, Oppo includes your choice of a DVI to HDMI or DVI to DVI cable as a bonus. This is worth about $30 to $50 depending on where you shop. A set of RCA audio cables and a composite video cable are also included.

Remote Control
The Oppo 971 includes a basic remote control that provides all the functionality that you need. As is true with most DVD players, there is more functionality on the remote than even a geek would want, but it works well for controlling every function of the Oppo 971.

PAL and DVD Regions
We did not test PAL; however it is purported to be excellent by Secrets of Home Theater and High Fidelity. Another bonus of the 971 is it can be made region free. This means that in the United States and Canada it ships as a Region 1 DVD player; however, an upload is available to make it region free, allowing you to play DVDs from anywhere in the world.

Upgradeable
After we received the unit and had done some initial testing, Oppo advised us that a new firmware release was available at their web site so we copied the firmware update to a CD, loaded the CD into the Oppo 971, and in a matter of a few minutes we were up and running with a new release. We were also given the opportunity to go back to our earlier release using the same procedure. With so much control of electronics residing in firmware these days, having the ability to upload new releases to fix problems or add features makes it an essential attribute for today's electronic devices.

Conclusion
Your first impression of the Oppo OPDV971H occurs when you open the box. Inside you find the Oppo 971 wrapped in a cloth-like blue pouch. Your immediate feeling is you have something special and that this company cares for its customers.

After you hookup the 971 and turn it on, you feel good about your purchase. Excellent analog and digital video fill the screen. The only caution we offer is that not all televisions and monitors produce the same results and the quality of your TV is definitely a factor in the quality of the video. However, even the best display cannot make a beauty out of a beast. We used a Samsung LCD, turned off all the noise reduction and video enhancement features, and we still had a great image.

About the only thing that was unremarkable about the Oppo OPDV97H, was the remote control. As it turns out, we had an earlier design that has since been replaced. Below is a photo of new remote that has been ergonomically improved.

The ability to upgrade the Oppo 971 through a firmware upload from the Internet gives economic life to your investment through upgrades and provides comfort in knowing that compatibility problems that emerge in the ever changing market of evolving technology can be addressed on the fly.

If you do not have a digital display with a DVI or a HDMI connector, you cannot take advantage of the 971's exceptional digital performance; however, its remarkable handling of analog video, such as composite video, s-video, and component video is reason enough. At $199, the Oppo OPDV971H is truly a great value.

Where to Buy
Buy Direct from Oppo 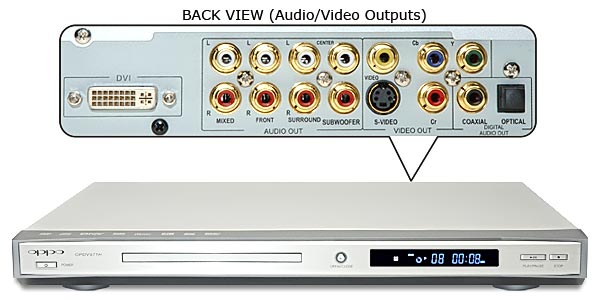