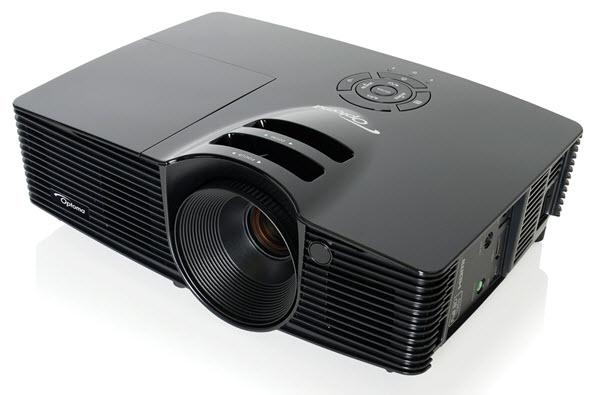 Optoma's HD141X is a powerful little 1080p home theater projector that comes at a bargain price. Powerfully bright, the HD141X lacks the fancy features found in more expensive models, but image quality is good and the $599 price can't be beat. You can buy the Optoma HD141X on Amazon and at specialty projector resellers online.

Below, we list the most important advantages and limitations of the HD141X. The Optoma HD141X is almost identical to the Optoma HD26, but it has a black case instead of a white one. For a full review of the features and capabilities of both projectors, see our Optoma HD26 review.

Great picture. The HD141X produces a bright, detailed image with well-saturated colors and good contrast. Producing over 3,000 lumens in its brightest mode, the HD141X will light up your living room, but it can also put out over 1,000 lumens in Cinema mode for a more refined, elegant home theater picture.

Full HD 3D. The HD141X will work with almost any source of 3D, including Blu-ray players and set-top boxes. It uses DLP Link and is compatible with the widely-available and inexpensive 144 Hz DLP Link glasses. But it also has a VESA 3D sync port, so you can add aftermarket radio-frequency or infrared glasses and emitters if you desire.

Great for gaming. Low input lag of 33 milliseconds makes the HD141X a good choice for gaming. At sixty frames per second, 33ms is only two frames. While that's not as good as it gets for projectors, it's awfully close.

Color adjustments. When adjusting white balance, the HD141X does not have separate controls for gain and bias on each color. That can make it difficult to really nail down a perfect grayscale, which is important for home theater.

Color light output. Despite producing over 3,000 lumens of white light, the HD141X tops out at just over 1,000 lumens of colored light. This can make highlights appear too bright and colors look dull or drab in some scenes, especially if using image modes other than Cinema.

Rainbow effect. The HD141X has a 2x-speed color wheel, so rainbows are a possibility with this projector. If you already know that you see rainbows on slow DLP color wheels, you should count on seeing them here.

At only $599, the Optoma HD141X represents an outstanding value in home theater projectors. It's a good starter projector due to its 3D capabilities and solid performance in Cinema mode. On the other hand, projectors with better color performance and fewer rainbows are available for not too much more money, so folks with room in the budget should consider their options carefully. But if you're just getting started in home theater or need a projector that will put a powerful image on the living room wall, the HD141X is a strong projector that will suit your needs.

For more detailed specifications and connections, check out our Optoma HD141X projector page.

-> BenQ W1080ST / BenQ HT1085ST
Dana Posted Jan 14, 2015 12:14 PM PST
I'm looking at either this projector or the BenQ W1070, also considering the more expensive HT1075 and HD26. For a total projector novice like myself, would I see a noticeable difference in any of these projectors, or are the differences discernable only to experienced projector users? Primary application is movies, almost exclusively in 2D (although I may toy with the 3D functionality). It will be in a window-less basement, so ambient light is a non-issue. Image throw will be 10-12 feet (I have about 2 ft of wiggle room to mount on my ceiling) and I hope to achieve about 100" screen.
John Posted Jan 15, 2015 12:16 PM PST
Go w/ either the w1070 or the HT1075.

Personally, I'd save money and go w/ the w1070. Cheaper, and same solid image.
frank Posted Feb 16, 2015 12:28 PM PST
This projector has connections on the side.Not from the rear.This could be a problem with the wife.They should have done in the rear.It's a cleaner look.
Louis Posted Mar 1, 2015 9:43 AM PST
Should you use white og grey screen to this projector? This is going to be in my livingroom, with light grey walls and white ceiling! So will white or grey screen be best?
potmfletcher Posted Mar 12, 2015 4:26 PM PST
I am considering this projector But need some help as I'm only now jumping into the projector world I have a budget of Â£700 is there any better I should look at maybe a benq or epson? It will be used for football movies and gaming the room will have as minimum light/ whatever the blinds keep out any help is much appreciated and thanks in advance
Nelson Posted Mar 17, 2015 12:44 PM PST
I was doing the same pondering. I ended up with the optoma as I found it for a deal at 569. If you are not a videophile, than its a great cheap projector for 1080p. By all means if you have the money and it will be your main television/movie viewing than the benq is the projector to get. But this is just for my basement to use on occasion and the picture quality for me is decent enough (especially at that price).
Chris Posted Apr 2, 2015 12:43 AM PST
Hi all. I recently pourchased this projector and have to say I could not be happier! This unit is awesome. The color's are bright and clear regardless of the background you project on. I don't even use a screen, just my walls. In my living room they are a flat white and at 15' away the picture covers 10x12 perfectly. It's so bright I can use it during the day without the curtains closed if I want. Of course, it's a better picture when they aren't. Gaming is awesome on this thing! I really could not be happier spending $600 on the hd141x. Perfect projector if you aren't looking for something... professional. 3d in steller performance also. It's really easy to set up and get focused, almost plug n play!
Santiago Posted Jul 21, 2016 4:54 PM PST
Hi, it says here "projectors with better color performance and fewer rainbows are available for not too much more money", so I was wondering if anyone could give some examples of projectors with fewer rainbows since it is a big problem for me. Thanks in advance.
JANE ALVES Posted Feb 10, 2022 5:16 AM PST
Projector is excellent. Cap is optional! From where would i buy a cap ? I want to protect the lense