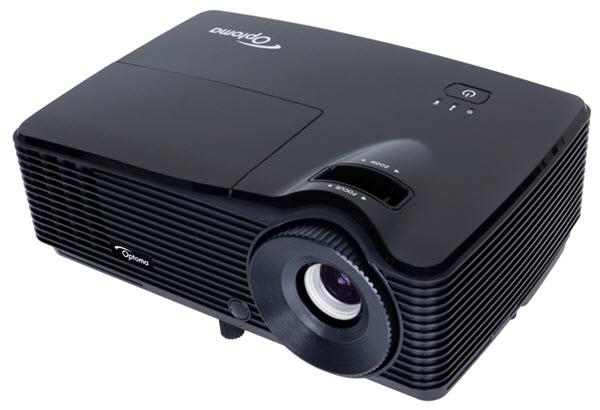 The Optoma W311 is a pint-sized 1280x800 projector for meeting rooms and classrooms. While not heavy on features, it easily accomplishes the core function of any presentation projector: it puts a bright image on the screen so your audience can see what you need them to see. And since it sells for less than $450, the Optoma W311 is a great option if you are on a tight budget.

Quiet operation. Presentation projectors, especially bright ones, tend to be loud. The W311 isn't. This may be due to its larger-than-average case. Though the W311 doesn't weigh much, it has a decently large footprint, measuring 11.3" wide, 7.5" deep, and 4.4" tall. That makes it about as large as a standard sheet of paper and roughly as thick as a couple of textbooks. All of that extra space in the case means more room for airflow, so it can afford to use quieter cooling fans than more compact portable projectors of equal brightness.

Good connectivity. Most inexpensive projectors have a single HDMI port, but the W311 has two. This gives you the versatility to connect multiple digital sources simultaneously, reducing the need for switching equipment and the added expense that it entails. Since devices from laptops to desktops to Blu-ray players all use HDMI these days, the additional HDMI input is sure to be useful.

Onboard sound. The W311's onboard 2W speaker isn't terribly powerful, and it can sound quite tinny if you turn up the volume too far. However, it certainly beats not having any sound output at all, and it does the job when you need the audience to hear and understand something. It's not a great choice for film or video, but the projector does have a 1/8" audio output jack if you want to connect to a larger set of speakers.

Lamp life. The W311 uses a conventional lamp rather than a solid-state engine, but Optoma rates the projector's estimated lamp life at 5,000 hours full power, 6,000 hours in ECO mode, or up to 10,000 hours in Education mode. Education mode combines dynamic lamp power and lower overall light output to maximize lamp life. It is important to note that these numbers are manufacturer estimates, that all lamps are different, and some lamps may fail before the estimated number of hours has been reached.

Light output. Rated at 3,200 lumens maximum, the W311's preset image modes focus on white light output, as that is what most folks need and want when it comes to a presentation projector. The brightest mode on our test sample, called Bright, measured 2,300 lumens, which is enough to light up an 80" diagonal screen in a room with significant ambient light. However, that's just over 70% of the rated specification, which is unusually low and frankly disappointing on a projector rated to deliver another thousand lumens.

Bright mode, as the name implies, delivers the brightest possible picture. As such, contrast and color take a back seat. If you need better contrast and more color saturation, consider Presentation mode (1660 lumens) which has better shadow detail and saturation, plus a slight blue tint that's appropriate for computer-based content such as Powerpoint slideshows or text documents. For content in which color is critical, Movie mode (1276 lumens) offers excellent saturation and the best contrast performance of any preset mode on the projector. There's also a User mode if none of these presets appeals to you or suits your needs.

For those times when you need less light, switching the lamp to Eco mode will reduce brightness by 20% in any image mode. There's also Eco+, which boosts light output in bright scenes (though only to about 85% of full power) and dims it in darker scenes. Eco+ is supposed to extend lamp life past the 6,000 hours offered by Eco mode, though this will obviously depend on your use.

Contrast. The projector's black level is only so-so, but that's standard on presentation projectors. In rooms with any significant ambient light, you create contrast by throwing more lumens at the screen, so a deep black level isn't as important. Much more important is the crisp, clean shadow detail in Movie mode, making it a good choice whenever you intend to show photographs or video.

Color. If accurate color is a priority, run the W311 in Movie mode. This mode gives reasonably accurate color with good saturation and excellent overall image balance, though it does cost quite a bit in terms of white light output. The projector's other image modes, while quite a bit brighter in terms of ANSI lumens, give the impression of dull, washed-out color with poor saturation. This is all fairly standard for inexpensive presentation projectors, though, and it puts the W311 just about on par with most of its competitors.

No onboard controls. The W311 is entirely dependent on its remote control, as it has no onboard controls except for a power button. All adjustments - changing sources, switching image modes, or adjusting the volume - have to go through the remote. So don't lose it.

No VGA input. While the projector includes two HDMI inputs, it doesn't have any VGA inputs at all. So if your workplace or classroom still uses analog sources, the W311 isn't the projector for you. This is especially important with older computers, many of which lack digital outputs.

Less portable. The W311's case, at 4.5" tall, is quite bulky. While this does a great job of reducing audible noise, it does make the projector more difficult to transport - especially if you're trying to keep your projector and laptop in the same bag. So while the projector's weight (4.8 lbs) indicates portability, there are better options available if you need something slim that's easy to pack and tote.

Fan buzz. While the fan noise is subdued, we did notice a high-pitched whistle or whine that started up about ten minutes into our session and continued until we shut the projector down. This trilling whistle can be very distracting. There's no way of knowing whether this was just a flaw with our projector or with all W311 models, but it's worth keeping an ear out for.

Rainbows. As with any DLP projector using a 2x-speed color wheel, the W311 is a bad choice for anyone prone to the dreaded rainbow effect. This is especially pronounced when viewing film or video, and screen size relative to seating distance plays a role in how prominent these effects appear. Again, though, this is par for the course for inexpensive presentation projectors using DLP technology, not a flaw inherent to the W311.

The W311 isn't the only game in town when it comes to inexpensive presentation projectors. The Viewsonic PJD5555w is another sub-$500 WXGA projector with roughly the same specifications and form factor. However, they look a lot different in real life than they do on paper. In fact, we'd recommend them to entirely separate groups of people.

The Viewsonic PJD5555w distinguishes itself with superior color reproduction and color brightness, with a much more balanced image in its brightest modes than the Optoma W311. It is also brighter overall, measuring over 3,000 lumens in its brightest mode versus the 2,300 we measured on the W311. It comes with a three year warranty (the W311 has a one-year warranty) and includes one HDMI port, two VGA ports, and a VGA monitor pass-through. It lacks the W311's second HDMI port.

The Optoma W311 is not without its strong points, of course: it costs a bit less than the PJD5555w by about $50; its lamp is estimated to last longer; it also has a quieter fan. Moreover, it ends up being very affordable in the long run, with lamp replacements that cost less than $170 each. However, compared to the PJD5555w, it has weak color saturation and it isn't as bright.

In other words, you should buy the Optoma W311 if you need an inexpensive general-purpose presentation projector for your business or classroom. But if you plan to display a lot of photography or video and need excellent color performance, the PJD5555w is a better bet.

The superior color performance also makes the PJD5555w a great option for home theater if your budget won't allow you to step up to 1080p projectors; at the $500 level, it's tough to beat. You can get 2200 lumens out of the PJD5555w in Viewmatch mode, which has a well-balanced picture. That's almost as much light as you get from the W311 in its brightest mode, which isn't well balanced at all. So for cheap home theater, the PJD5555w is a no-brainer. You can buy the Viewsonic PJD5555w on Amazon.com, and using this link will help support Projector Central.

Overall, the Optoma W311 is a bargain-priced powerhouse of a projector that's perfect for traditional presentation tasks like Powerpoint, spreadsheets, and text documents. It doesn't have a lot of fancy features, but it gets the job done at a price that can't be beat. There's still competition in this market, however, and the Viewsonic PJD5555w offers color performance that the W311 cannot match, so the W311 is not a good option for budget home theater use. But for those who don't need that extra performance and want to save a few dollars, the W311 is still a strong buy. You can buy the Optoma W311 on Amazon.com and help support Projector Central, too.

For more detailed specifications and connections, check out our Optoma W311 projector page.