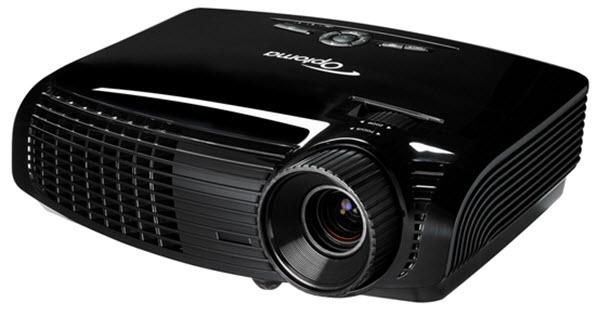 For years, the common answer to the photography question was to recommend a high-resolution 4:3 projector, such as an SXGA+ model. These were typically expensive, heavy, had lousy contrast, and were tailored for business display (meaning they had lousy color). The 1.33:1 aspect ratio of SXGA+ meant you'd lose resolution on the top and bottom due to black bars. All in all, they were not fantastic choices for photo display.

Later, as prices came down, the recommendation was shifted to 1080p home theater projectors, which possess the first three qualities in spades. Their 16:9 aspect ratio is wider than a photograph's 1.5:1, allowing photos to be displayed using the projector's full vertical resolution. The problem with 1080p projectors is that they were often very expensive and lacked the brightness of the SXGA+ models, limiting display to smaller screens.

Now, enter the Optoma EH1020. It is a 1080p projector with a theoretical 3,000 lumen maximum brightness. It has great dynamic range, ensuring your high-contrast photos have plenty of pop. It has excellent color out of the box, and plenty of adjustments if you are only happy with perfection. Perhaps best of all, it only costs $1,499 at retail. For high-resolution data display, such as engineering documents or photography, the EH1020 is an excellent choice.

Lumen output. The EH1020 is rated at 3,000 lumens maximum. On our test unit, Bright mode measured nearly 2198 lumens, which proved to be the highest output we measured from this particular projector. Of course, this is optimized for data display, so highlights are emphasized while colors can seem muted and undersaturated. Presentation mode takes some emphasis out of highlights while still keeping the image quite bright; our projector measured 1884 lumens in this mode.

For photography, though, you want the best possible color, which is found in sRGB mode. Highlights are toned down quite a bit, but color saturation is much better and contrast gets a boost. On our test unit, sRGB mode measured 1271 lumens in high lamp mode, which is still more than enough for a very large 150" diagonal screen in a darkened presentation environment.

On the EH1020, high lamp mode is called "Bright" while low lamp mode is Standard, or "STD." This can lead to some confusion, since there is also an image mode called "Bright," so trying to describe settings verbally could lead to confusion. As far as lamp modes are concerned, though, STD mode causes a 19% drop in light output in all modes, bringing Presentation mode from 1884 to 1525 lumens and sRGB mode from 1271 to 1030 lumens. This is still plenty of light, and many users will prefer the extra thousand hours of lamp life over the increased brightness.

Contrast. The EH1020, with its DLP light engine, delivers impressive contrast. Video and photographs with high dynamic range are shown in all of their expected glory, and the integrity of shadow detail is preserved. While black level is not on a level with 1080p home theater products, it was also never designed to be. The EH1020 emphasizes light output rather than deep black performance, making it an ideal choice for brighter viewing environments such as conference rooms, classrooms, and photography club meetings. And while black is not comparable to the inky depths present on HT machines, the impression of snap and overall solid dynamic range is not negatively affected.

Color. When displaying photography, color accuracy is of paramount importance, even when displaying black and white images. The EH1020 has very good color in its sRGB mode, with rich saturation and accurate balance. With color images, this has the effect of making your pictures look their most vibrant and powerful. With black and white images, an accurate color balance ensures that your pictures look the way you intended, with neutral grays and no hint of blue, green, or yellow bias. Nothing ruins the effect of a strong black and white image quite as quickly as a strong green bias in the projector. Should you wish to display black and white photography with a warmer tone, the projector can be separately calibrated to do that.

User interface. Sometimes, the little things can make or break a projector. The EH1020 has a great image, but it also has a very easy to use menu system and remote control, so using the projector is straightforward and hassle-free. The menu system is organized into four tabs, called "Image," "Display," "Setup," and "Options." Each tab has several options available, and there are a few sub-categories as well. This is necessary to contain all of the options available on the EH1020, but the menu layout does a good job of placing everything logically.

The EH1020 has full RGB gain/bias color controls, allowing for a high degree of customization if you are not satisfied with the performance of sRGB mode. The one thing it lacks is full gamma customization options, instead allowing a selection from among four presets: "Film," "Video," "Graphics," and "Standard."

One nice perk is that the EH1020 includes two user calibration modes, allowing you to create two separate calibrations (say, for color and black-and-white film or photography) and save them both. This does not sound like a big advantage--until you get the projector home and realize you really do need it, at which point it's invaluable.

The remote control is compact and efficient, with a built-in laser pointer for added convenience. Presenting any sort of complex material is much easier when using a laser pointer, as it allows you to pick out areas of interest without actually walking up and blocking part of the picture.

Wireless capability. The EH1020 has the ability to accept a wireless adapter which allows you to display material over VGA without connecting any cables. This could be useful in a number of situations. If you want to ceiling mount a projector but cannot afford the time or expense of having cables run, this could be an option. If you are a traveling presenter and want to keep things simple and clutter-free, this is a great way to accomplish that. The adapter retails for $149 from Optoma.

8W Speaker. Onboard projector speakers are usually small, tinny, and next to worthless. The EH1020 has an 8-watt monaural speaker, which is significantly better than the average. It can crank out enough volume to be sufficient for a medium-sized conference room with an audience of perhaps twenty people. Beyond that, you will want to use an external sound system for reasons of volume, but an external sound system is never a bad idea - they tend to have much better handling of bass, they are almost always stereo, and the larger speakers produce less distortion at higher volumes.

Low maintenance. The EH1020 is a filter-free projector, as are almost all single-chip DLP projectors these days. What this means for you is that you'll never have to change an air filter or wonder if it's time for periodic maintenance. The only thing you'll have to do is occasionally change the lamp, which is rated to run between 3,000 and 4,000 hours in low lamp mode. Lamp replacements are inexpensive, relatively speaking: a new lamp costs about $250. This ensures that, should your lamp blow out unexpectedly, you won't feel too much of a bite to the wallet--at least, not compared to projectors with $399 replacement lamps.

Quiet operation. Even with its high brightness, the EH1020 is very quiet during use. The exhaust fan noise is low in pitch and volume both, making it easy to ignore. This is a benefit in all situations: during movies, you won't need to turn your speakers up quite as loud; during presentations or slideshows, you won't need to speak as loudly or shout to be heard over the projector. In either case, you'll hear what you want to hear, rather than the projector's operating noise.

Networking. Business and Classroom buyers may be discouraged to learn that the EH1020 has no networking capability. Networking has several benefits, not the least of which is the ability to monitor all of an institution's projectors from a central location (generally the IT department). This allows the people in charge of maintenance to keep tabs on their equipment, responding more quickly if something breaks and even making plans for maintenance when they see lamp hours edging towards the maximum. The EH1020 can take an optional wireless adapter, but it is not a true network.

USB mouse control. The EH1020 does not have a USB port, so users without the wireless attachment will not be able to use the page up/page down functions on the remote control. This sort of control is sometimes undervalued; it can be very helpful in slideshows, allowing the presenter to wander rather than glue himself to his laptop. The remote control has the buttons necessary for this function, since it's a common model used on many projectors, but the projector lacks the necessary USB port.

Warranty. With a single year of warranty coverage, the EH1020 does not come with much of a safety net. It certainly does give you some protection against getting stuck with a lemon. But competing models can include two or three year warranties with the purchase price.

Placement flexibility. As a business projector, the EH1020 has only rudimentary positioning controls - a 1.2:1 zoom and no lens shift. This is fine if you want to place the EH1020 on a conference room table or in a ceiling mount - the projector's upward throw offset of 15% is a good fit for those applications. However, there are comparatively-priced 1080p projectors that have both longer zoom lenses and H/V lens shift. They do not possess the sheer brightness of the EH1020, but if you are concerned about placement problems, some of them still output up to 1,500 lumens. For light-controlled rooms, they can be a viable option.

The Optoma EH1020 is a multi-purpose projector that's great for any type of presentation task. Its native resolution of 1920x1080 is great for any type of complex images or graphics, including engineering diagrams, photographs, and even some light video use. While it is not built to act as or replace a home theater projector, its 1080p resolution will invariably draw comparisons. So, let's spell everything out right now.

The EH1020 has higher brightness than home theater projectors, making it great for large screens and bright rooms. It has lower on/off contrast, but in-scene dynamic range is still high, so it performs well with dynamic material like photographs. Its high resolution means it is probably "too much" projector for Powerpoint presentations and other documents that already perform well on lower-resolution projectors. It has a 2x-speed color wheel, so motion video will induce rainbow effects in those sensitive to them. It lacks the bells and whistles of home theater projectors, such as lens shift and long zoom lenses.

If you need a high-resolution business projector, the EH1020 is a great option. For what it is, it works extremely well. It could function as a bright home theater projector if the 2x wheel and less than super deep blacks are not a concern, but it was not designed for that purpose. Judging the projector within the context of its intended use, it is an excellent product, and we highly recommend it.

For more detailed specifications and connections, check out our Optoma EH1020 projector page.

Thank you in advance!