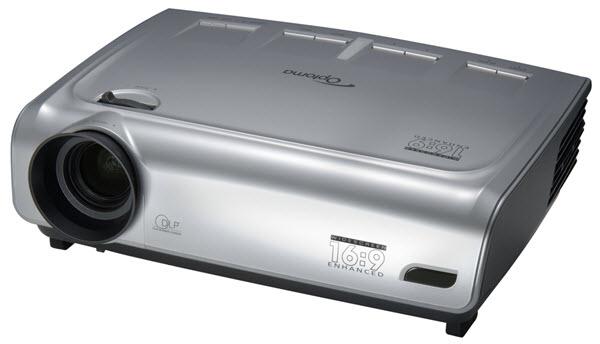 It is becoming increasingly common to see computers that output widescreen signals, whether they be laptops or desktops. As such, a new class of projectors is required which can natively display 16:9 and 15:9 signals while maintaining appropriate brightness and contrast levels for dynamic data projection. In this vein is the Optoma EP1690, a 1280x768 projector rated at 2500 ANSI lumens and 2500:1 contrast. It is light enough to serve as a portable projector, and is an ideal unit to couple with a widescreen laptop. It is bright enough for use in small to medium sized conference rooms and classrooms. It has good color and contrast, which makes it a good choice for video game enthusiasts, and it can be ceiling or coffee table mounted for convenience. While it can serve a secondary role as a video projector, the EP1690 really shines with high-contrast data material. This versatile package is available for under $1700, which is an excellent bargain. The casework for the EP1690 is almost identical to the Optoma HD72, but in a subdued silver color. It's a diminutive projector that won't attract too much attention in your conference room or living room.

Like the HD72, the EP1690 has a built-in upward throw angle. Regardless of zoom or throw distance, the bottom edge of the image will be displayed 1/3 of the image height above the centerline of the lens. For example, at 9 feet from the screen, the smallest possible image is 58" wide by 35" high. The bottom edge of the image will appear 11.75" above the lens centerline, or 33% of the picture height. Remember to take this into account when considering projector placement. This upward angle lends itself either to ceiling mounting or to coffee table or conference room table placement. On the other hand, a rear shelf mount is near impossible without keystone correction, since the projector has such an aggressive upward throw angle that it would need to be tilted downwards quite a bit to hit the screen.

The menu system is straightforward, with a few quirks. When the menu button is pressed, it brings up a screen showing the four sections - IMAGE, DISPLAY, SETUP, and OPTIONS - before bringing you to the main menu. This screen is largely useless, as you can switch sections using the tabs at the top of the menu screen at any time, and it just adds an extra click before you can adjust settings.

Within the image menu is the Advanced picture menu, which contains such options as BrilliantColor, TrueVivid, gamma adjustment, and color temperature controls. BrilliantColor is a technology designed to improve color saturation on single-chip DLP projectors. However, varying the BrilliantColor settings did not have any noticeable effect on color saturation. Rather, it had the effect that "white peaking" does on other projectors. It boosts highlights, and at its highest settings can boost them to the point of blowing them out. But it is very effective at making text screens brighter and more dynamic. True Vivid seems to function as intended by cutting out noise in mid-range material. This makes colors more dynamic and the whole image more three-dimensional.

Out of the box, the Color Temperature control was not properly calibrated. Settings 1 and 3 were identical and measured around 5500K, which is generally too warm for data/graphics display. Setting 2 was slightly colder, but did not correspond with 6500K, which would be ideal for digital photography and video use. However, you can adjust each of these settings to your taste and save your adjustments. Once you do so, you can switch between them at will for use with data, color photography, video gaming, or video.

The EP1690's remote is a departure from Optoma's usual remote control designs. Prominent features include a laser pointer and wireless mouse control (for use with the projector's USB port). Page up/down buttons are included as well as digital zoom. There are direct-access buttons for the projector's different sources, as well as the standard menu controls. However, menu controls are located in an awkward spot - down near the very bottom of the remote. To get to them, I found that my grasp on the remote was tenuous at best, with half of my hand hanging off of the back. The remote also lacks a backlight, as is typical with a data projector.

With a monitor passthrough port, a Kensington lock port, and a low street price, the EP1690 should appeal to those buying for education and classroom use. The 1280x768 display will allow you to project images in native WXGA as well as standard XGA (1024x768) without scaling.

The EP1690's fan is quiet. While it's not in the league of some of the dead-silent home theater projectors available, it is an unobtrusive low-pitched hum, and you can easily speak and be heard over it.

On data projectors, keystone adjustments can degrade image sharpness somewhat, but on this projector it has little negative effect. The EP1690's vertical keystone adjustment slightly bolds text, but has no noticeable effect on digital photography, video games, or spreadsheets and charts. Nevertheless it is best to place the projector such that the image is square with the screen, thereby avoiding the need to use keystone adjustments to begin with.

The EP1690 is rated at 2500 ANSI lumens. However, when fine-tuned for an optimal high-contrast data image, our test unit measured 1385 ANSI lumens. While 55% of the projector's advertised output isn't terribly impressive, that's enough light to power a 100" to 120" diagonal widescreen image even with some ambient light in the room. This makes the EP1690 suitable for large conference rooms with good light control, or smaller rooms with more ambient light. Though the lumen output does not measure as close to spec as we would like, one must bear in mind that the street price of $1700 is far below the MSRP as well. So the value proposition is still very much intact.

After lowering brightness a few notches from the default setting, contrast and dynamic range were much better. Black text was inky against a white background, and photographic or video game material showed excellent shadow detail and black level.

The EP1690 displayed some color temperature inconsistency. On a 50 IRE (medium gray) test pattern, the top 50% of the screen measured 500 Kelvins higher than the bottom half. This holds true for most of the grayscale, though it does not affect extreme highs (90/100IRE) and lows (10/0IRE). However, after some tweaking, the EP1690 gives a good looking picture with well saturated colors. The variance in color temperature across the screen is not particularly unusual on data projectors, and it is not something you'd notice in every day use.

When using data sources, the EP1690 produced an image free of noise. With video signals there was a good bit of image noise, but the projector's "noise reduction" feature did a good job of keeping it under control.

The EP1690 produces a very sharp image with almost all types of content. Text in native mode was sharp and crisp, whether in 15:9 or 16:9 mode. Digital photography and video games were likewise impressive clean and well-defined. Edge-to-edge sharpness across the image is impeccable.

The EP1690's good sharpness, WXGA resolution, and bright picture make it an excellent video game projector. In tests with both an Xbox console system and a dedicated gaming PC, the EP1690 delivered very good performance. The 1385 lumen output is much brighter than conventional home theater projectors, and video games have a bright, dynamic, yet cinematic look. If you're serious about video games, a projector like this one can help to make the most of them.

With video material, the EP1690 proved it can hold its own for occasional use. There is more image noise than usual on home theater projectors. Noise Reduction helps to minimize this, but image noise is still more noticeable than on comparably priced home theater machines. BrilliantColor should be turned down very low or completely off for video use. The projector has a 2x color wheel, so those susceptible to rainbow artifacts will likely notice them on this projector. And while color performance is acceptable, it's not comparable to a dedicated home theater machine in the same price bracket. So while it is a good multipurpose projector, we would hesitate to recommend the EP1690 for dedicated home theater use. Optoma does not market the EP1690 as a home theater projector, and if that is your interest there are better options in the same price bracket.

The Optoma EP1690 has a lot to recommend it. It is a bright, high contrast projector that combines the best attributes of data and widescreen video projectors. It is a solid multi-purpose projector for textual data, graphics, computer video, or video games. With a low price, monitor passthrough, and Kensington lock, it will be an attractive option for use in classrooms when widescreen performance is needed. It can also deliver quite acceptable home theater video or digital photography slide shows when not being used in its primary role as a presentation projector. There's a bit of a learning curve when using the remote, but for $1700, it does the job it was designed for, and does it very well indeed. It is one of the most aggressively priced WXGA projectors on the market at this writing, and it is easy to recommend.

For more detailed specifications and connections, check out our Optoma EP1690 projector page.