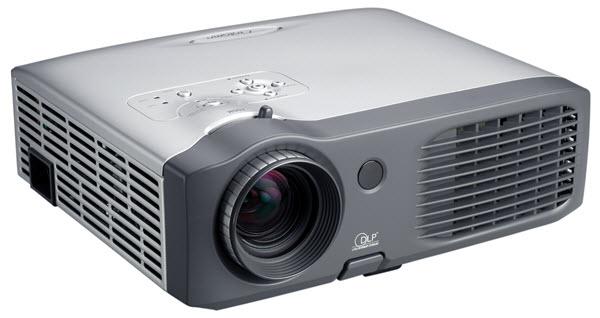 Enter the Optoma EP770, a 3000 lumen XGA projector weighing in at 5.3 pounds. This diminutive projector has something for everyone: monitor loop-through for educators, high lumen output and low weight for travelers, good color and contrast for photographers, and a reasonable price tag. The EP770 is a steal at just $1299.

The EP770 is compact, at 4.1 x 10.4 x 9.3 inches, and it weighs only 5.3 pounds. It comes packaged in a black carrying case with a small Optoma logo on the front, for easy transportation. While it is not small enough to put in a laptop bag, it is still easily transportable.

The connection panel on the EP770 is unusually full-featured for a projector of this class. In addition to the standard composite, s-video, and VGA-in, the EP770 sports VGA-out and DVI-D ports. And when the VGA-out port is coupled with the projector's Kensington locking point, it becomes a real contender for the K-12 education market.

Business projectors are generally loud, and while the EP770 is not as quiet as a home theater projector, it is also quieter than its direct competition. In eco-mode, it is all but silent when placed more than a few feet from the audience.

The remote control is functional and responsive. Along with controls for basic menu function and switching sources, there is a "hide" button for blanking the screen, controls for the projector's excellent vertical keystone correction, page up/down for your computer, and the onboard speaker's volume controls. Buttons have plenty of space between them, and it's easy to find your way around the remote without fumbling.

The menu system is straightforward, with tabbed sections related to different adjustments. There are four preset modes as well as one user-adjustable mode, for different environments and content. In addition to color temperature control, there are also separate adjustments for red, green, and blue - but not sharpness, which is fixed.

The EP770's vertical keystone adjustment allows for 16 degrees of adjustment in either direction. Keystone scaling on the EP770 is very clean, with almost no bolding or distortion of text or images. However, the projector has a mild upward throw offset of about 12% of the image height. That means the lens is set to place the image at about the height most people would want it when the projector is placed on a conference table. If this is your anticipated typical usage, you won't need to use keystone adjustments anyway.

The EP770's main claim to fame is its touted 3000 ANSI lumen rating, which makes it an exceptionally bright portable projector. In PC mode, straight out of the box, our test unit achieved 2400 ANSI lumens, which is excellent. In low lamp mode, lumen output dropped 25% to 1800 ANSI, still more than enough to show dynamic, high-contrast graphics or text at large screen sizes. For more color sensitive applications, sRGB mode improved color balance and accuracy while outputting 870 ANSI lumens in high lamp mode and 660 ANSI lumens in low lamp mode. The highly adjustable lumen output of the EP770 guarantees its usefulness in a variety of applications.

However, brightness uniformity only measured an unimpressive 68%. The center of the image was noticeably brighter than the corners in most instances, especially in the EP770's highest light output modes.

Contrast on the EP770 is more than enough for data graphics and text display, and it can even display photography when given a dark enough room. However, film and video content lost a good bit of shadow detail in dark scenes, so it is best to use the EP770 as it was designed - as a data projector.

Color in sRGB mode was very good on our test unit. Our collection of digital photos looked accurate and rich, though some tweaking was necessary using the EP770's RGB color controls.

Our test unit showed some flaws in edge-to-edge sharpness. Specifically, when using an entire screen of text, there was noticeable softness on the right side of the screen -- especially in the top right corner. This is not unusual for a data projector, and nothing to write home about. And while overall image sharpness was not as hard-edged and aggressive as that on LCD projectors of the same resolution, the EP770 was still sharp enough to cleanly display all kinds of native XGA content.

The Optoma EP770 manages to combine the light weight of a good portable projector with the high lumen output of a larger fixed-installation machine. Its excellent connectivity makes it a sure bet for educators, while its ability to project on large screens make it ideal for both photographers and travelling presenters. If you want a portable projector with many of the bells and whistles of a larger business machine, all at a great price, the EP770 will serve you well.

For more detailed specifications and connections, check out our Optoma EP770 projector page.