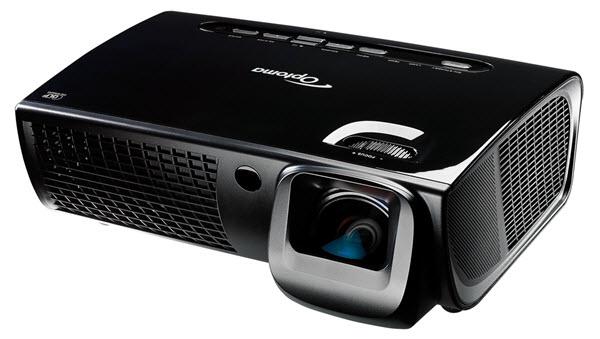 Optoma's EX525ST is their first short-throw projector, and they took the time to get it right. This projector is geared for the K-12 classroom market, with several features that make it ideal for the classroom - among them a password lock that engages automatically if the projector sits idle for too long, a control panel lockout, and an 8-watt speaker that provides plenty of sound. With street prices below $1100, the EX525ST is a great choice for smaller classrooms.

Short throw. The EX525ST needs only four feet of throw distance to put a 100" 4:3 image on screen. Many XGA projectors which are otherwise comparable need 10 feet or more of throw distance to put the same size image on the screen. In many classrooms, this would put the projector squarely in the middle of the students, which is undesirable for several reasons. The short-throw design of the EX525ST allows the projector to be kept near the front of the room, where the teacher can keep an eye on it, without sacrificing screen size.

Lumen output. In Bright mode, the EX525ST will put 2388 lumens on the screen, out of a rated 2500 lumens. This image mode pushes highlights, so it is a good choice for black-and-white text documents or similar content. For material that requires more accurate color, try using sRGB mode, which still cranked out a respectable 1763 lumens in high lamp mode. Low lamp mode drops lumen output in every mode by roughly 30%, but extends the life of the lamp by an additional 1000 hours. Low maintenance. The EX525ST's filter-free design is made possible thanks to its sealed light engine, which cuts projector maintenance to vacuuming the vents on occasion, and switching out lamps when they expire. And with an estimated 4,000 hour maximum life, lamps do not expire often. Replacement 200-watt P-VIP lamps cost $349 from Optoma at the time of this review, for an estimated cost per hour of eight cents.

Powerful sound. The EX525ST has an 8-watt speaker, which is more than what's available on most other projectors in its weight class. Using our standardized test tone, we measured a volume of 75 dB at a distance of three feet - plenty loud enough for a classroom setting. In fact, you'll want to be careful not to seat anyone too close to the projector, as 75 dB could be described as "uncomfortably loud."

Security features. As the EX525ST is ideal for use on a rolling cart, it is important to make sure that it doesn't roll away on its own. To this end, the projector has several security features which, taken together, combine to make the EX525ST one tough cookie.

First up is the password function, which will lock the projector's controls if it is left idle for a given amount of time - the timer can be modified or disabled from the menu system. Next is the control panel lockout, which makes the projector useless without the remote since the top-mounted control panel will simply cease to function. Third is the wired networking function, which not only allows the projector to be controlled from a central location, but also allows a network administrator to be notified if the projector is unplugged. Finally, the EX525ST has locking points for both a cable lock and a Kensington lock, making it less likely that the projector will be stolen to begin with.

Express replacement warranty. In the event that your projector breaks, getting it fixed as quickly as possible is very important. Optoma's "Express" Replacement warranty means that they will ship you a replacement projector before you even send them the malfunctioning unit, limiting downtime to the absolute minimum possible. This does vary somewhat over the course of the warranty; during the first year Optoma sends a refurbished projector, but during years two and three a "loaner" is sent while your projector is repaired. However, the end result is the same: you have a working projector in the classroom again in a matter of days, not weeks.

Cluttered remote. The EX525ST's remote suffers from a small identity crisis, as it cannot decide if it wants to be a mouse substitute or a method for controlling a projector. The large top keypad is actually used to control a computer via USB, and has no effect on the projector itself. For menu control, you'll need to use the much smaller and somewhat cramped second keypad, located near the bottom of the remote. As many other solutions exist to control a computer remotely, it would have been nice to see the EX525ST's remote treat the projector as its primary concern.

Brightness uniformity. If there are any universal truths in the projector world, it is this: there is always a downside. In this case, the sharp upward throw angle of the EX525ST causes light to reflect from the screen in an unconventional way, which produces low brightness uniformity. On our reference 1.0 gain screen, the EX525ST measured 61% uniformity, with the brightest spot appearing in the bottom center of the image - in other words, the spot closest to the lens.

Keystone. For best results, the projector should be mounted parallel to the floor to ensure a clean, legible, squared image. While this is good advice with any projector, it goes double for the EX525ST. Keystone correction introduces some softness into the image, which is especially noticeable when displaying material with a lot of small numbers and text. It is less noticeable when viewing images or Powerpoint presentations, or even text documents with larger font sizes. Unless you plan on displaying documents with a lot of fine detail, you should be able to use keystone correction without undue fuss.

Optoma's EX525ST is a very capable short-throw projector. While no projector is perfect, a projector can be uniquely well-suited to a certain application. The EX525ST is designed to be a fantastic classroom projector, especially when used on a rolling cart. It is capable of putting a very bright, large image on screen from a very short distance. Onboard security features make it difficult to steal and even more difficult to use if stolen. An express replacement warranty minimizes downtime and keeps your lessons moving along. While it's not without flaws, the EX525ST is a good, solid performer.

For more detailed specifications and connections, check out our Optoma EX525ST projector page.

In any other situation than having the projector functioning with no keystone, applying keystoning means that the image loses its shape, ie it no longer becomes 4:3 for applications such as with SMARTboards or other commonly used items where a specific screen size is required. The manufacturer & distributor are aware of this but unfortunately do not consider this important. So the majority of applications for this projector, ie those where the projector needs to be mounted out of harms way, ie above head height as per a risk assessment render the image out of shape & give you the sort of finished effect projection that would make you consider other brand projectors
DJ-B Posted Jul 18, 2010 11:51 PM PST
I am thinking about buying one of these projectors for my DJ business. It will be used for playing music videos and will be mounted behind the screen in rear projection mode. Does anyone know if this is a sturdy projector that would hold up to the road? Also does "wireless capability" mean that I could run it using my laptop without connecting any wires to it? DJ-B