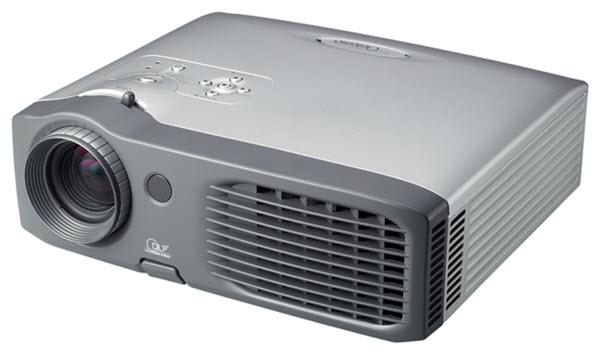 Most native 4:3 projectors released in the last few years are oriented primarily toward data presentation. Many of them offer just the bare minimum in video processing capability. However the Optoma's EZPro 739 delivers excellent data performance and impressive video into one affordable 4:3 machine that is truly multi-purposed - and won't break the bank in the process.

Connection Panel. One composite video, one S-Video, one VGA-in, one VGA monitor pass-thru, one DVI port with HDCP, one 1/8" audio input, one USB-B port, and one RS-232 port for an external control.

As a data projector, the EzPro 739 really shines. It produced roughly 1400 lumens at settings tailored to presentation. So it has the power to light up a 120" diagonal screen with a moderate degree of ambient light in the room--plenty sufficient to handle a variety of presentation needs.

The lack of obvious hotspotting is particularly important for quality data presentation. The 739 showed none at all. Its brightness uniformity was impressive, averaging about 94% by our measurements, which is about as good as it gets.

Projectors sometimes have a hard time maintaining sharpness and clarity across the entire image; however, the 739 performs better than most in this regard as well. From edge to edge, the 739's picture was crisp, with only the slightest hint of blurring - for example, if the upper left corner of the image is in perfect focus, the lower right corner may appear slightly blurred. However, this is rarely noticeable, and in most cases the entire image is presented in sharp focus.

While the 739's handling of text-based material is good, its handling of graphics and photography is even better. Due to its high contrast and excellent color performance, digital images looked natural, well-balanced, deep and three-dimensional. If you're looking for a projector on which to display photography or other image-intensive material, the 739 is an excellent choice for this purpose.

Of special importance to traveling presenters is keystone adjustment, which is implemented well on the 739. Scaling due to keystone adjustment on the 739 blurs text slightly. However some presenters will find this desirable - the blur effectively bolds all on-screen text, making it easier to read for large audiences or those viewers seated farther from the screen. Keystone adjustment rendered text documents easily readable and graphic image showed almost no loss of sharpness.

With a data signal, the 739 tends to introduce some subtle image noise in highlights. While this does not occur for the most part during video, it can become a minor nuisance in bright portions of data projection.

The Optoma EZPro 739 does a good job with most video signals as well. However, this is first and foremost a data projector, and so it is geared towards the display of data and still images. While the processing of standard definition component video is above average for this type of projector, the 739 does not have the more comprehensive video processing capabilities of comparably priced dedicated home theater projectors.

For HDTV, the 739 displayed 720p and 1080i signals that far surpassed the typical performance of data projectors. As a native XGA resolution machine, the 739 compresses 720p and 1080i into a 1024x576 16:9 pixel matrix, and it does so with remarkably clean results, delivering solid blacks and excellent shadow detail. Colors were mostly spot-on accurate and remarkably natural. If you plan on using the EZPro 739 for HDTV viewing you will not be disappointed.

The 739 an ideal projector for video gaming--assuming you use its component video input. With this input it delives a bright, high contrast image with excellent color and sharpness. However, the difference in quality between component input and the alternatives of S-video and composite is especially dramatic on this machine. If your game system has an optional component output, use it. The difference in the image is well worth the minor expenditure of a component adapter.

The 739, like many other projectors on the market, has a selection of pre-calibrated color profiles for movies, video, data, games, and other common applications. The 739, however, examines the input signal and auto-detects which signal type it is being fed - for example, when we tested it with an Xbox game system outputting component video and fed it to the projector through the VGA port, it automatically changed the image calibration to "Game". When we turned off the game and switched to our DVD player, it returned to our hand-calibrated profile.

Many data projectors offer digital zoom in order to bring attention to one section of the projected image. Many others have some form of pointing device, such as a laser pointer in the remote or a digital pointing device in the projector's software. The 739 has neither. We would have liked to see these features in what is primarily a data projector.

As with any XGA format projector, the EZPro can accept a 16:9 signal and display it in the middle of its 4:3 frame, with black bars above and below the image. However, in addition Optoma has included an option to vertically reposition the 16:9 display area within the 4:3 frame. In other words, instead of having black bars at the top and bottom of the image, you may shift the image downwards so that the only black bar is at the top, or vice versa.

The EZPro 739 also has the ability to display a 4:3 image in a 16:9 frame using the "Window" aspect ratio. This is valuable for anyone who wants to use this unit as a widescreen projector with a 16:9 screen. It means you can display both 16:9 and 4:3 material in their proper aspect ratios without moving the projector.

The 739's remote has no form of illumination, a rather unfortunate lack - but then again, it was not designed for use in the darkness of a theater environment. The remote is well laid out, with large buttons placed logically, including direct-access source switching controls. Unfortunately, there is no direct-access button to change the aspect ratio, so one must open the menu to switch among the 739's three aspect ratio options: 4:3, 16:9, and Window (used to display a 4:3 image within a 16:9 frame). The menu is straightforward, though there is some initial confusion about the layout - it is arranged in two rows of three tabs each, and each tab contains different configuration options. However, only the left and right buttons can be used to switch tabs, as the up and down buttons send the user into the menu itself. Still, this is only a minor problem until you get used to it.

The fact that the 739's color wheel has a 2x rotation speed may cause problems for some, primarily in video applications. The problems with DLP color separation artifacts (rainbows) have been covered extensively elsewhere, so be advised that if you are sensitive to them, chances are good you will see them on the Optoma 739.

Fan noise on the 739 is very unlikely to cause a distraction, clocking in at 32dB during normal operation and only 27dB in eco-mode. Even in a quiet viewing room, fan noise should not create a problem.

Light leakage is also minimal. While the front vent of the unit lets out some light, the sides and rear of the unit emit very little errant light. Even in darkened conference rooms or theater environments, light emissions from the 739 pose no distraction.

While noise and light should not pose any problems, the EZPro 739 puts out quite a bit of heat. Due to the lamp being mounted directly behind the front vent, there is a large amount of heat expelled outwards through the front vents at an angle, to avoid heat exhaust causing distortion of the image. If the projector is sitting on a low shelf close behind the viewers, the heat may cause a distraction. Likewise, if the 739 is placed in close proximity to another piece of equipment or does not have adequate ventilation, there is a possibility of overheating.

The presence of so much heat has the potential to limit mounting options, as well. Frontal heat exhaust would make a low shelf mount difficult. The ideal situation, then, would be a higher shelf or a ceiling mount. If portability and quick set-up are factors, a coffee table (or conference table) mount will also work well. As long as the EZPro 739 is not in the immediate proximity of the viewers, heat output should not cause any problems.

The lack of a dedicated component input means that users must use a component-VGA adapter, which is not included. This may increase setup time out of the box or cause the buyer to make an extra trip to the store. However, there is always the option of running a signal through the DVI port, which will give you the cleanest signal anyway.

Selling for under $2,000 street, the EZPro 739 is an excellent data presentation projector with above-average video processing. It should be viewed as an excellent multi-purpose unit for data, graphics, video gaming (with component input), and video.

As far as dedicated home theater use is concerned, perhaps the biggest reservation we would have is the 2x speed color wheel. If you and those who will view your projector regularly are not sensitive to DLP rainbow artifacts, then the 739 will be quite servicable. But the 2x speed DLP wheel in particular can cause problems for viewers ranging from visual distractions to eyestrain and headaches. If you do not know whether you or others in your household are sensitive to DLP rainbows, you should plan to give the 739 a lengthy audition prior to making a final purchase commitment.

For more detailed specifications and connections, check out our Optoma EzPro 739 projector page.