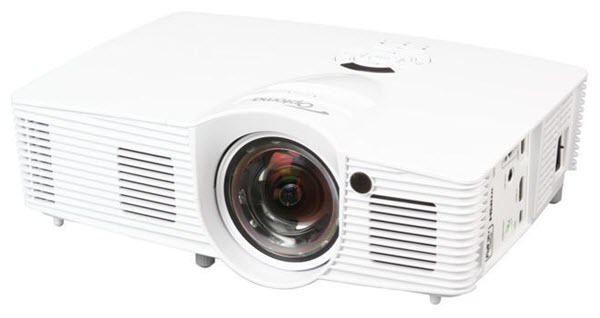 When the latest generation of game consoles boosted their resolution to 1080p, they left Optoma's 720p gaming projectors behind the curve. The Optoma GT1080 is their response, delivering 1080p in a projector designed for game playing. Key features include a short throw lens, which lets you get a big image even in a tight space, and a short lag time--an obvious advantage in any game where reaction time matters.

Beyond that, because games include both photorealistic scenes and images that are visually equivalent to business graphics, the GT1080's focus on games means it also has to handle both video and data images well. That lets it double as a data projector or, to a lesser extent, a home entertainment projector for video. The combination can make it an attractive choice at $749 street, even for people who aren't all that serious about games.

One important plus for the GT1080 is that it does an excellent job of avoiding rainbow artifacts (red-green-blue flashes). With static images, I didn't see any. With games and full motion video, I saw them only occasionally and only in scenes that are prone to showing them, including a black and white clip. If you don't see these artifacts easily, you may never notice them with the GT1080. If you're sensitive to them, you'll see some, but almost certainly not often enough to find them annoying.

Also on the list of strong points for game playing is lag time. I measured it in Game mode at 33.0 msec--or 2 frames at 60 frames per second--and between 33.0 and 34.0 msec in all other predefined modes. The only option I could find that affected the lag was Brilliant Color, which increased lag in Game mode by less than 1 msec when I changed it to the lowest setting.

Near-excellent data image quality. Colors in data images were nicely saturated in all predefined modes and suitably vibrant in most modes. In the brightest mode, red was a little dark in terms of a hue-saturation-brightness color model, but that's typical for projectors with a significant difference between white and color brightness. The GT1080 also did an excellent job maintaining detail across the entire screen. White text on black, for example, was highly readable at 9 points, and black text on white was crisp and readable even at 7 points.

Good video quality. Video quality is in roughly the same class as typical home-entertainment projectors in the GT1080's price range, but with one odd problem. Posterization was unusually obvious in some predefined modes, particularly with live or recorded video, as opposed to filmed, content. With Cinema mode, however, I saw barely a hint of the problem, and only with particularly demanding images.

Very much on the plus side, the projector did a good job maintaining shadow detail, it delivered good to excellent color and contrast, and, except when the posterization problem showed up, it handled skin tones well. It also helps a lot that the projector doesn't show many rainbow artifacts.

3D. The GT1080 supports HDMI 1.4a, which means it can connect directly to video sources like a game system for 3D. It doesn't come with any 3D glasses, but it supports both Vesa RF glasses and the 144Hz DLP-Link glasses I used for my tests.

Image quality, for both full-motion video and games, was essentially the same for 3D as for 2D images for those aspects of image quality that both share. Color quality was excellent, for example, and I saw occasional rainbow artifacts, but not often enough to be a problem. Also note that the single predefined mode for 3D doesn't tend to posterize images.

The projector also did well on issues specific to 3D. I didn't see any crosstalk, and saw just a hint of 3D-related motion artifacts. A swinging baseball bat in a game, for example, moved in small, discrete steps, rather than a continuous smooth motion. However, the jerkiness those steps introduced was minor enough that I didn't find it annoying.

Setting up. The GT1080 weighs 6.0 pounds and comes with a soft carrying case, making it easy to bring to a friend's house or store away when you're not using it if you need to. The short throw is a particularly welcome touch, giving you a big image even in a tight space. For my tests, I used a 90" diagonal image at the native 16:9 aspect ratio, with the projector just 38" from the screen.

As with most short throw models, there's no optical zoom. The digital zoom can shrink the image to 80% of the full size, but because it adds artifacts with some images, it's better avoided in favor of moving the projector to adjust image size. The manual focus ring offers a little too much resistance for fine control, but the focus changes little enough with a given amount of movement that it's hard to overshoot the best focus.

With the GT1080 sitting on a flat surface, the lens offset puts the bottom of the image at 16% of the screen height above the midline of the lens. If you need to, you can use the screw-on feet near the front and back of the projector to move the image up or down or adjust yaw. You can also adjust the image shape with a vertical keystone setting, although, as with digital zoom, this is better avoided since it can introduce artifacts.

Long lamp life. The rated lamp life, at 5,000 hours in bright mode and 6,000 hours in Eco mode should help keep the total cost of ownership down, even with the $179 lamp replacement cost.

Quiet operation. Optoma doesn't publish a noise level for the GT1080's Bright lamp mode, but it's within an acceptable range: low enough to get drowned out by the sound system most of the time and ignore easily otherwise. Eco mode is rated at 27dB, and is almost impossible to hear from a few feet away.

Bright image. Optoma says that the GT1080 changes its color wheel algorithm to adjust brightness and color quality depending on whether the incoming signal is from a computer or video device. The measured brightness using the two types of sources is enough to notice in two images side by side, but only a minor difference in perceived brightness.

As a practical matter, the 90" image I used for most of my testing was a little too bright for comfortable extended viewing with Bright mode in theater dark lighting but was a good choice for Game mode in moderate ambient light.

Acceptable brightness uniformity. With a 69% brightness uniformity measurement, the difference between the brightest and darkest areas on screen is visible even with the image broken up by text and graphics. However, you have to be looking for it to see it. Unless you're particularly sensitive to brightness variations, it shouldn't be a problem.

Posterization. The tendency to posterize video (as opposed to filmed) material in its brighter predefined modes makes the GT1080 less useful than it could be in the role of general purpose home-entertainment projector.

The Optoma GT1080's tendency to posterize live and recorded video with its brightest predefined modes may limit how bright an image you can use for video. However, the projector doesn't have the same problem with data images, filmed content, or games. And it delivers a constellation of features--including the short throw, capable audio system, and short lag time--that make it an attractive choice for its intended use. If you want a solid, portable projector for gaming with a robust on-board sound system, the Optoma GT1080 is an excellent value for only $749.

For more detailed specifications and connections, check out our Optoma GT1080 projector page.