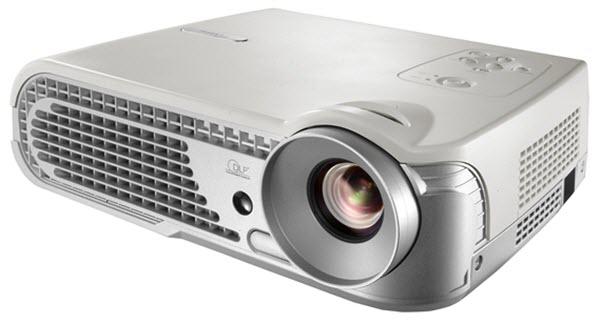 Last year's Optoma H30 home theater projector was a fine machine, having earned the 2004 CES Innovation Award for its outstanding performance and value. ProjectorCentral also put it on the Highly Recommended list. However, for an added $300 or so, the new Optoma H31 surpasses the H30's performance in many respects. We are enthused about adding this one to the Highly Recommended list as well.

Connection Panel. One composite video, one S-Video, one set of standard YPbPr component video inputs, one DVI port that supports DVI-I with HDCP, VGA, and SCART, and one RS-232 port for an external control.

Sitting next to the H30, it takes some time to realize that the H31 is a vastly different machine. The cases for these two models are identical, and there is a weight difference of only a few ounces. It is only at the connection panel that external differences can be noticed. Optoma has chosen to discard the H30's 15-pin VGA ports (one for input, one for monitor pass-through) in favor of both a DVI port and a standard Component input set, as well as an RS-232 port for an external remote. While this does crowd the connection panel somewhat, the improvement in connectivity more than compensates for this minor annoyance. Optoma has also included an IR receiver for the remote control on both the front and back of the unit, just as they did with the H30.

It is once the H31 is up and running that it is able to truly distance itself from the H30. The first and most obvious difference between the two units is that on the H31, Optoma has switched to a native 16:9 format compared to the H30's 4:3. Furthermore, the 854x480 format enables the display of NTSC video (640x480) and DVD widescreen video (720x480) without vertical scaling. That translates to a cleaner, sharper image than you get from the H30, or any SVGA resolution projector that must fit a 16:9 image into an 800x450 matrix.

Less obvious improvements abound: the H31 has improved light shielding, creating less of a visual distraction in the case of a coffee-table setup; the H30 leaked a significant amount of light from the rear connection panel. While the product specifications for the H30 and H31 list identical operating noise, we noticed that the H30's fan had a noticeable high-pitched tone; the H31 has eliminated this and thus presents less of an audible distraction. For convenience, the H31 also has a well-designed backlit remote, including buttons dedicated to format change and source switching without forcing the user to delve into the menu system - which, by the way, is elegantly designed and easy to navigate.

The H31 is not a high-resolution projector. At native 854x480, visible pixelation can become a problem in the enjoyment of the image. Using an image of 100" width, a viewer must be approximately 14 feet away from the image for all pixelation to disappear, or 1.75 times the screen width. This puts the viewer at about the same distance from the screen as the projector. So the lack of visual and noise distractions from the unit become all the more valuable - luckily, the H31 handles these areas well.

We checked the H31's lumen output against manufacturer specifications, and clocked it in the range of 300 to 350 ANSI lumens during typical use. This is normal for units in this price range. As such you will want to limit the amount of ambient light in the room, as it will cause the image to appear washed out and dull. In a dark room, 300 lumens are more than enough to properly view most material.

Brightness uniformity (the amount that the unit's lumen output falls off from the center of the image to the edges) is about average on the H31, with no serious hotspots.

If you are sensitive to DLP rainbow artifacts, note that the H31's six-segment color wheel spins at 4x speed, which greatly reduces the odds of users being botherd by rainbows. This is particularly noteworthy in a machine at this price range, where most competing DLP products use the standard 2x wheel that is more likely to produce color separation artifacts.

One issue with many Optoma projectors (including the H30 and H31) is that they have a high throw angle - on the H31, the center of the image strikes the screen at 16.75 degrees above the projector's lens. This means that for an image 13' away, the center of the image will be about 47 inches above the projector height if table or shelf mounted. With the H30, if you did not want the image that high on the wall, you needed to find less-than-ideal ways to angle the projector down (i.e., wedge a spare DVD case under the unit's rear or get a shorter coffee table).

To compensate for this, the H31 has a built-in digital lens shift option. However, this lens shift system has only two settings - one lower than the usual angle, and one higher. We found that using the lower lens shift setting combined with a standard component input increased the amount of overscan (the amount of image that is "cut off" and therefore not viewable) from negligible - about 1% at the bottom of the image - to nearly 13%. Using the higher lens shift setting increased overscan at the top of the image to 11%. We attempted to correct for this by using the "Image Shift" buttons on the remote control; however, the projector's image boundaries do not move. While the "lens shift" option is good for correcting small amounts of overscan, there is no physical lens shift on the H31, and therefore the best way to obtain the desired image placement on the wall is still through proper mounting.

Consequently, most users will find that table mounting or ceiling mounting are the better options to achieve the desired image placement. Rear shelf-mounting half way up a wall behind the seating area is likely to require a tilting of the projector, which will further require the use of keystone adjustments to compensate for.

Deinterlacing on the H30 and H31 is nearly identical - which is to say, outstanding. However the H31 clearly surpasses its predecessor in shadow detail, black level, overall clarity and sharpness of the image, scaling, and color saturation.

These two units were placed side-by-side to evaluate improvements in image quality in these areas. In a "dark" film like Heat, the H31 was able to provide excellent detail in areas that the H30 struggled with, due to the unit's superior contrast capability. In dark shadows and low light subject matter, the H31 manifested some digital noise, but there was a clear improvement over the H30 in this regard.

In terms of the scaling of 480-line video, the H31 delivers a clear, sharp image with few artifacts, due to the fact that it only needs to perform modest horizontal scaling and no vertical scaling. This is a marked improvement over the H30's performance, since compressing 480-line video into 450 lines tends to introduce some softness to the image.

The H31's color saturation is outstanding. In fact, we were so impressed with the H31's performance by this point that we decided to test it under more challenging circumstances - specifically, against the Panasonic PT-AE700U.

Obviously the H31 cannot match the AE700 in terms of resolution; however, in the areas of interest to this review - color saturation and HDTV performance - the H31 did surprisingly well.

Out of the box, the H31 produced an image with a noticeable greenish cast. After calibration, however, we were able to come close to duplicating the color performance of the AE700 on the Optoma H31. Both images showed vibrant color and excellent saturation, and the images were judged nearly identical. We were enthused to see the H31 performing so well considering its modest price.

When it comes to HDTV, we again compared the H31 to the AE700. The H31 handles an HD signal surprisingly well - scaling is handled beautifully, with few artifacts and little blurring. While the H31 lacks the physical resolution to display HDTV in its full capacity, the fact that it could compete as well as it did with the AE700 is remarkable. The H31 does an outstanding job displaying high-definition signals for an entry-level machine in this price range.

Optoma seems to have adopted a specific objective when designing the H31: Use the H30 as a starting point, keep everything worth having, and throw out or improve everything else. The H31, for an extra $300, manages to surpass its predecessor in every way, which alone would make it a superb value. However, Optoma has managed with this unit to create an image of exceptional quality for an entry-level projector that can compete quite respectably with more expensive machines. There was no debate here about whether should be added to the Highly Recommended list of home theater projectors.

For more detailed specifications and connections, check out our Optoma H31 projector page.