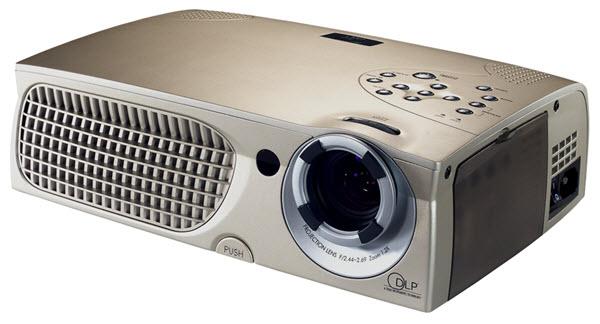 Optoma is getting very serious about home theater. The new Optoma H56 is the strongest evidence of that fact to date. We liked what we saw last year in the earlier edition H55, but with the H56 Optoma takes video performance to a whole new level. It is a beautiful product with very little to complain about, and as of this writing we are enthusiastically adding it to our list of Highly Recommended Home Theater Projectors.

Lens: The H56 has a 1.2x manual zoom lens with a relatively long throw distance as compared to other units in its class. If you wish to operate in 16:9 mode, to fill a 100" diagonal 16:9 screen you need to place the unit between 14.75 and 17.75 feet from the screen. Adding 1.5 feet for the projector itself plus some rear clearance, and the minimum front-wall to rear-wall room size to accommodate a 100" screen would be 16.25 feet. The connector panel is on the side of the unit, and exhaust intake is on the rear. So not much rear clearance is required, although it is always wise to leave some room for heat dissipation.

Though the throw distance limits its use in smaller rooms, the good news is that for those who have the room to accommodate it, the longer throw distance and smaller cone of projection provides more even image performance on the screen. That is because light strikes the sides of the screen at a lower angle of incidence and thus does not bounce off at oblique angles compared to machines with shorter throws.

Connector panel: Connection options include a DVI-I port, a 15-pin VGA port, one S-video, one composite video, one RS-232C, and a 12V trigger relay. It does not include a set of three RCAs for component video, but it does not need them. The H56 comes with an adapter that will convert the VGA port to three RCAs.

Set-up options: The H56 can be set up and operated as either a 4:3 projector or a 16:9 projector. You tell it which screen format you are using, and it will adjust both 4:3 and 16:9 source material to your screen. If you operate in 4:3 mode, a 4:3 source will fill the screen, and 16:9 material will be shown with black bars top and bottom. If you operate in 16:9 mode, then 16:9 source material will fill your screen, and 4:3 material will either be (at your option) truncated to fill the screen, or reduced full frame in the center with bars on the side.

Frankly, the native feature does not significantly improve the image in our opinion. Instead, it provides good evidence as to the incredible power of the onboard scaler to render a clean HDTV image in 1024x576 format. We suspect most folks will opt for the full frame display after having experimented with it for a while.

As noted in the opening paragraph, we can't find much to complain about with the H56. All things considered it is a great product and delivers superb video quality for the money. Contrast, black level, and shadow detail are all outstanding. Color accuracy and saturation are first rate. And image sharpness and detail is as good as it gets in native XGA format. Brightness after calibration is plenty sufficient to light up a 100" screen, especially considering the ample contrast.

Fan noise is in the range of what we'd classify as low to moderate. It is not overbearing, but if there was any change we'd like to see it is a reduction in fan noise. There is a modest amount of light leakage from the front bezel through the fan exhaust, although it is not enough to create a real problem.

HDTV is so good on the H56 that it will raise an interesting question-how much extra image quality do you really get from the higher resolution Mustang/HD2 DLP projectors that sell for two to three times the price? The truth is, not nearly as much as you might think. The key factor is screen size and viewing distance. If you put the H56 and any of the Mustang/HD2 machines side by side on 16x9, 100" diagonal screens and viewed them from a distance of 15 feet, few would be able to tell the difference. As you move closer, subtle advantages in detail will become evident with the Mustang/HD2 machines. And some pixelation in rolling credits and subtitles will become visible more quickly on the H56 as you move closer. But is the image definition from the higher resolution machines worth double or triple the price? For most folks who work hard for their money, the answer would be a resounding no. The difference in image quality is much more subtle than the resolution specs would lead you to believe.

The only projector currently selling for under $5,000 than can rival the elegant performance of the H56 is the NEC HT1000. This is also a native XGA machine, rated at 1000 ANSI lumens and up to 3000:1 contrast, also with a 4x speed six segment color wheel. There is no way to make the call on which one of these is the "better" unit, and we won't try. Both are outstanding performers for the money, both are better than anything else in the price range for light-controlled home theater use, and both are on our Highly Recommended list.

As far as salient differences are concerned, the H56 has the HDTV native mode options that are not available on the HT1000. It has a three-year warranty compared to the HT1000's two years. And it sells (at this moment) for $500 less at retail.

On the other hand, the NEC HT1000 has a quieter fan, DVI with HDCP, a very slightly shorter throw distance, and a sealed light engine that makes it more resistant to dust and smoke in the environment.

Both the H56 and the HT1000 produce magnificent HDTV images that rival those of the higher resolution competitors. Both should be used in a darkened environment with little to no ambient light for best performance. Both are ideally matched with the Stewart Firehawk screen. For those on a tighter budget, the Da-lite High Contrast CinemaVision is the next best alternative.

Generally we can make a call between two competing products in a given budget range and for a particular application. This time we can't. The H56 and the HT1000 are both giants in price performance. Either one will deliver stunning home theater.

For more detailed specifications and connections, check out our Optoma H56 projector page.