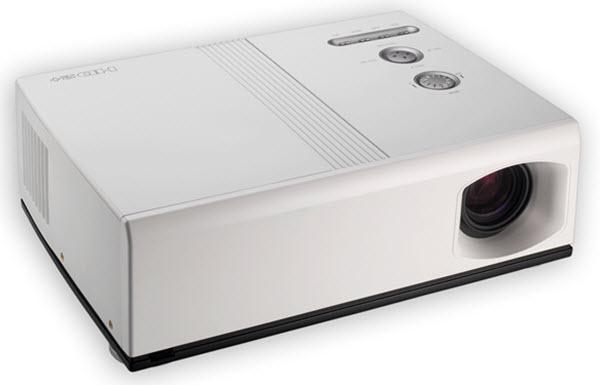 [Note: Star ratings added 3/28/05. Value assessment based on average street prices as of this date.]

The Optoma H77 is this company's new top-of-the-line home theater projector. Incorporating the latest HD2+, 1280x720 resolution DLP chip and a 5x speed, 8 segment color wheel, it also offers a variety of user friendly features like a long zoom range, power zoom/focus, vertical lens shift, and a quiet fan to make it easy and comfortable to install in viewing rooms from small to spacious. And it's 3000-hour lamp life (in eco-mode) is a bonus for those looking for lower operating costs over the life of the product.

Connectivity. The video inputs on the rear of the unit include one DVI-I port, one set of 5-BNCs, one set of 3-RCAs, one S-video and one composite video. There are also two 12-volt triggers and an RS-232 port. Compatibility: Signal compatibility includes DVI-HDCP, component and RGB HDTV 1080i, 720p, EDTV component 576p, 480p, standard component video 480i, 576i, S-video and composite. Color systems include NTSC, PAL, and SECAM. Computer compatibility includes digital and analog up to SXGA 1280x1024.

Lens. The H77 has a power zoom and focus lens with a zoom range of 1.38x, which is a longer zoom range than we find on most digital projectors. It throws a 100" diagonal 16:9 format image from a distance range of about 11.25 to 15.5 feet. The unit also features manual vertical lens shift, which lets you position the image easily relative to the screen without tilting the projector and using keystone adjustments to compensate for the trapezoid. In its neutral position the centerline of the lens intersects the center of the projected image. Using the lens shift adjustment dial on the top of the unit, the image can be raised to the point where the centerline intersects the bottom edge of the image, or lowered to the point that it intersects the top edge of the image.

Picture control. The H77 offers three picture modes which Optoma calls Cinema, Normal, and Vivid. Each of these can be adjusted with controls on brightness, contrast, sharpness, and gamma. Video signals can also be adjusted on color saturation and hue. In the advanced menu there are independent controls on red, green, and blue contrast and brightness.

Brightness. The projector has two light output settings, Normal and "Brite." Normal is the factory default, and it is in fact referred to as eco-mode in the owner's manual. The "Brite" setting puts out about 1/3 more light, and Optoma anticipates that this will reduce lamp life to 2000 hours.

We noticed a great deal more light output with a progressive scan signal than with interlaced or DVI. This phenomenon is common, but not normally to the magnitude we see it on the H77. The brightest picture was achieved with 480-progressive input in Brite lamp mode. After calibration at this setting we measured lumen output at 510 ANSI lumens. Switching to an interlaced input signal dropped the ANSI lumen reading to 320. In Normal lamp mode, the ANSI lumen reading with 480p was 385, and with 480i it was 240. The optimum operating mode is progressive scan with "Normal" lamp mode, producing 320 ANSI lumens.

Often on projectors with lens shift, you lose light output by moving the lens shift to the extreme ends of the adjustment range. This did not occur on the H77. Light output at the most extreme offset was within 3% of the lumen readings at dead center.

Fan noise. This is not a problem on the H77. In "Brite" mode the fan noise is low, and in Normal mode it is extremely quiet.

Brightness uniformity. Exceptionally good, with light falling off no more than 10% from center to the edges of the screen.

The contrast rating of 3500:1 is a theoretical spec. Since consumers have been conditioned to be sensitive to contrast specs, manufacturers tend to quote theoretical maximum contrast ratios that could never be achieved in a typical home theater environment. It is important to recognize that subtle changes in black levels on the screen have enormous impacts on the perceived contrast of the image. In a typical home theater or multimedia room, light from the projected image on the screen will be reflected off walls, ceiling, carpet, furnishings, etc., and back onto the screen. This reflected light has no impact on highlights, but it illuminates blacks and thus compresses the overall contrast range of the image on the screen. Ambient or reflected room light is therefore a great equalizer of theoretical contrast ratings among competing products.

Therefore we would caution buyers against the prevailing tendency to place undue weight on the differences between contrast specs on high contrast DLP projectors. Unless you have a very dark home theater room in which walls and furnishings absorb reflected light, the actual difference in real life contrast between projectors will not be as dramatic as the sometimes radically different contrast specs would lead you to believe.

Geometry. Some of the HD2 machines have had some optical distortion issues. The H77 is not one of them. Geometry on this unit is essentially perfect.

Deinterlacing/scaling. Some projectors have such comprehensive onboard deinterlacers these days that there is little or no difference in image quality between interlaced and progressive inputs. Not so on the H77. We gained better image stability and sharpness with progressive scan input, bypassing the internal deinterlacer. The good news however is that using a JVC XV-D723GD DVD player with 480p as a source, the H77 produced an almost perfect floating zone plate pattern that was virtually free of motion artifacts.

Internal scaling of standard definition sources on the H77 is reasonably sharp. However those who are spending this much on a projector will be looking for the best possible picture out of it. Considered in that light, the internal scaler is a bit soft compared to that onboard the DVDO iScan HD video processor. If we owned this projector we'd be using the iScan HD along with it to improve overall image sharpness from DVD. Meanwhile the H77 delivers a rich, perfectly balanced HDTV image with excellent color saturation, contrast, and stability. For those primarily interested in high quality display of HDTV material the H77 should be on the short list of options to consider.

The Optoma H77 is a solid home theater projector that offers some distinct advantages. In particular the long zoom range and vertical lens shift make it easy to install in a variety of settings. Its very low fan noise is always a bonus, and it is particularly strong in its display of HDTV.

The H77 is not one of the brighter units in the category, so its use in a dark viewing space is important. The use of 480p component input increases brightness about 60%. And with 480p input, overall image stability is exceptional. Therefore those who do not use an external video processor such as the DVDO iScan HD may prefer to use 480p analog instead of the DVI port to gain the additional light output.

The H77's current retail price of $8,995 is on par with other home theater projectors featuring the HD2+ DLP chip. One can definitely get a beautiful picture from it. However this is a highly competitive market. Ultimately the H77's value proposition will be based upon the degree to which consumers find this unit discounted on the street.

For more detailed specifications and connections, check out our Optoma H77 projector page.