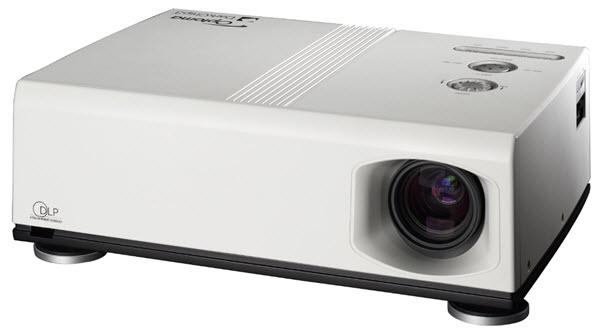 One of the hot entry-level DLP projectors these days is the Optoma H31. Now at the opposite end of the performance spectrum comes the Optoma H79, featuring TI's DarkChip3, 1280x720 resolution, and an 8-segment, 5x speed color wheel. The H79 is a thoroughly impressive projector that delivers just about everything we could ask for.

As a general rule, a good video-optimized home theater projector will output somewhere in the neighborhood of 300 to 500 ANSI lumens, regardless of that unit's stated lumen rating. The H79 comes in at the high end of this spectrum, outputting 450 ANSI lumens at video-optimized settings. If this is not enough light for your needs, enabling "britemode" (essentially, high lamp mode) boosts lumen output to nearly 600 ANSI lumens. With this kind of power, very large screen diagonals - larger than 120" - pose no problem for the H79.

Contrast on the H79 was nothing short of astounding - black level is the best we've seen short of a CRT projector. Shadow details are open and well-defined, and there is no crushing of the grayscale on either end of the spectrum.

One of the benefits of the new DarkChip3 is that the space between actual mirrors on the chip - the inter-pixel gap - has been made smaller. Furthermore, the black dot in the middle of each pixel mirror is gone. These improvements eliminate visible pixelation entirely and produce an exceptionally smooth, well integrated image. You can go with larger screen sizes and sit closer to the screen than ever before without any distraction from pixel definition.

The H79 also uses an eight-segment color wheel that contains two dark green "Dark Video Enhancement" segments, rendering shadow areas of the image are nearly free of dither. In point of fact, the entire image is about as clean and stable as we've yet seen on a digital projector.

Color out of the box wasn't quite accurate - the projector was biased towards green, and reds seemed oversaturated. While it takes a fair amount of fine-tuning to get the H79's color performance right, it is impressive once it reaches its peak. Colors have excellent saturation, flesh tones are realistic, and the image almost seems to pop off of the screen.

The H79's de-interlacing and scaling is top-notch. When compared to a quality progressive-scan DVD player, we saw no loss of quality when we switched the DVD player back to outputting an interlaced signal and let the H79 do the heavy lifting. Furthermore, the DVDO iScan HD video processor did not contribute any incremental image acuity compared to the H79's internal processing.

With high definition 720p, the H79 looks truly amazing, as you'd probably expect - after all, this is what the projector is built for. 1080i still looks slightly softer in comparison due to scaling, but is still sharp, clean, and stable.

We fed the H79 a composite signal from a video game system in order to see how the H79 deals with inferior signals. While image quality is compromised with a composite signal, it was surprisingly watchable in most cases. However, when we switched to component cables, the difference was refreshing. If you plan on using a video game system with your projector, invest the $20 in a component cable adapter for your system. That $20 is the difference between a large image and a large high quality image.

The H79's 5x speed, 8-segment color wheel will ensure that very few people susceptible to color separation artifacts will still see them on this projector.

This unit has a powered zoom and focus lens, with a 1.35x zoom range. While quite convenient, it may be of limited usefulness in a permanent theater set-up if you are using a 16:9 screen. However, it supports a unique installation option for those who like very large scale 4:3 presentation. You can install a 4:3 screen, and set the H79 to fill it side-to-side with a 16:9 image. Then if you want to go very large format for something like Gone with the Wind, which is a 4:3 film, you can use the power zoom to fill the 4:3 screen. Practically speaking, this installation option is only available with projectors that have powered zoom lenses and a zoom range of at least 1.33x, and the H79 is one of the few that do.

Mounting the H79 is a snap with the unit's vertical lens shift. The lens shift allows for two full screen heights of leeway - so for a 100" diagonal image (49"x87") the picture can be placed vertically anywhere within a 98" range. However, the lens shift has no incremental offset, meaning that at the ends of the vertical lens shift range, either the bottom edge or the top edge of the projected image intersects the centerline of the lens. While this makes rear shelf mounting particularly easy, some tilts and associated keystone adjustments may be needed to accommodate coffee table or flush ceiling mounting.

The H79 features both horizontal and vertical keystone adjustment to compensate for off-angle mounting arrangements. While this is useful if something prevents you from mounting your projector horizontally or vertically centered, it is still preferable to avoid off-axis mounts when possible. The H79 performs most keystone adjustments cleanly, but HD 720p signals in particular will need to be scaled rather than displayed in native format, which eliminates the benefit of feeding the H79 a signal in its native resolution. Furthermore, use of radical keystone adjustments will reduce light output on any projector, and this one is no exception.

Optoma's remote is distinctive, with a bright blue backlight that fades away after a few seconds of inactivity. The buttons are large enough to be easily found, and there are direct access buttons for each source, an aspect ratio menu, the powered zoom and focus, some basic video adjustments (brightness / contrast / color), and horizontal and vertical keystone. This may sound like a crowded remote, but Optoma has managed to keep clutter to a minimum by having some of the buttons function differently when the menu is open.

The menu system itself is similar to that used in other Optoma home theater projectors, and is simple to navigate. The H79 has several included color profiles to cut down on necessary calibration, as well as several gamma settings. Gamma is changed via a sliding control, and the settings are not named.

Color temperature is adjusted via three preset values, simply numbered 1 through 3. Straight out of the box, these measured 5200K, 6200K, and 7700K. There are no independent color temperature adjustments, so the three settings are linked together - for example, if you were to calibrate setting number 2 to 6500K, setting 1 would be warmer while setting 3 would be cooler. This can prove useful if, for instance, you prefer to watch black and white films at a warmer setting, and play video games at a cooler setting.

Finally, color can be fine-tuned via individual red, green, and blue contrast and brightness settings (gain and offset).

The H79 is housed in a somewhat utilitarian large white case, which manages to avoid being unforgivably boring only by the barest of margins. However, this case does serve multiple purposes. White is often the preferred color for those ceiling mounting against a white ceiling, as it causes the projector to be somewhat invisible. And the larger form factor houses a unique sound damping system that brings the noise rating down to 23dB - there were several occasions while the lamp was warming up when we weren't sure if the projector had turned on or not, since we couldn't hear it.

Fan exhaust is diverted back and to the right through an exhaust vent, so there is no chance that exhaust will interfere with the light path from the lamp to the screen. Errant light was nearly nonexistent, and will not pose any distractions.

It was quite an effort to write this review, since the reviewer's job is to find the flaws, and there simply weren't many flaws to be found. Optoma has produced a beautiful projector that delivers an exceptional image for the money. It is easy to use and offers a lot of installation flexibility. If you are looking for truly high-end performance at a terrific price, do not miss the chance to audition the Optoma H79.

For more detailed specifications and connections, check out our Optoma H79 projector page.