(Edited for clarity on 4/10/08. Please see the paragraphs on placement flexibility.)

Optoma has a history of making affordable home theater projectors that pack a punch. In 2006, the Optoma HD70 made the dream of 720p home theater for $999 a reality. This year, the Optoma HD65 takes up the reins, and proves to be a powerful, worthwhile addition to Optoma's budget 720p line. This light, bright 720p DLP projector is both portable and powerful, making it easy to use almost anywhere. The HD65 makes some improvements to the already solid performance of the HD70, and sells for $999. 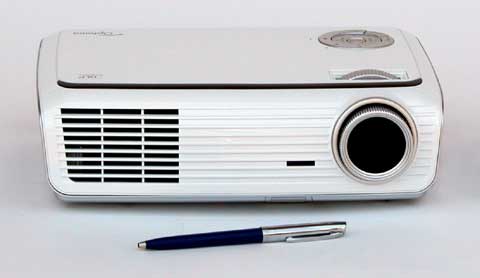 High lumen output. We measured the HD65 at a maximum of 1152 ANSI lumens, using "Bright" mode with the lamp on high. This setting makes the HD65 particularly useful for HD sports, video games, and other "social" content. Many folks do not have the means or inclination to darken an area of their house for theater use. Projectors like the HD65 allow those users to bring the theater experience into their living rooms without drastically altering their decor.

The HD65's lumen output is also highly variable. For many people with more traditional home theaters, 1152 ANSI lumens is simply too much light. In these cases, the HD65 can be switched to low lamp mode, which will lower lumen output by roughly 11%. Further reduction can be accomplished by switching image modes or reducing the projector's BrilliantColor setting. Turning off BrilliantColor completely can decrease the projector's lumen output by 43%, and the projector uses a ten-step scale for adjustment so there are plenty of settings to choose from. That said, the minimum lumen output we measured from the HD65 was 419 lumens, in Cinema mode with the lamp on low power. That is a remarkable amount of light for a minimum reading. Highly portable. Measuring 10.2" by 7.4" by 2.9" and weighing only four pounds, the HD65 is easy to transport and store. After use, it can be stowed in a carrying case, hall closet, or even in a drawer. It is small enough to pack with your game system for transport to someone else's home. In a projector bright enough to use almost anywhere in the home, portability is a big plus.

Good color performance. With the older HD70, we noticed some artifacts related to the projector's color processing, which we did not experience when using the newer HD65. Color gradients were smooth and even, without the rough transitions of the older model. These improvements are most visible when there is a gradient on the screen, such as the flesh tones in faces or a solid color field, such as the bright colors used in many video games. In these situations, there is a clear and appreciable difference between the two projectors with regards to color transitions.

Good remote layout and backlighting. The remote control is the usual Optoma design, wide on both ends and pinched slightly in the middle, with rounded corners. The buttons are relatively large ovals, with textual labels printed on the buttons themselves. The backlight is a brilliant blue which some might consider too bright, as blue LED lights on electronics tend to be. However, it does make reading the buttons on the remote very easy, even in a blacked out room.

Placement flexibility. The HD65 has a manual 1.10:1 zoom/focus lens and no lens shift. The HD65 will display a 100" 16:9 image from about 12 feet, give or take a few inches. The short zoom range does not allow for much adjustment, so the size of the projected image can only be changed significantly by moving the projector either closeer to or farther from the screen. Considering that even the HD70 had a 1.2:1 zoom lens, the HD65's zoom is minimal by any standard.

It has a fixed 23% upward throw offset, meaning the bottom edge of the image is 23% of the image height above the lens's centerline. We would not expect many users to ceiling mount this projector, but if it was ceiling mounted, the top edge of a 100" projected image would appear a little over a foot down from the ceiling. Please note that this measurement does not account for the size of the ceiling mount itself, so the actual image will be several inches further down the wall. If you do want to ceiling mount the HD65, it might be a good idea to tape off a 49" x 87" area starting one foot from the ceiling, to see if this arrangement works for you.

On the other hand, the built-in throw angle is such that placement on a coffee table will in many cases put the image right where you want it.

Relatively noisy. The HD65 packs a very bright lamp into a very small case, which makes it somewhat louder than many other home theater projectors on the market today. However, fan noise is low in pitch, which makes it much less noticeable.

So what does this mean, realistically? The HD65 is a great projector, capable of putting a beautiful image on your screen for less than $1000. It is not designed to produce the deep, inky black levels present more expensive home theater projectors. But for the money it delivers a very pleasing image. For those who plan for a permanent installation in a dark room home theater, there are better choices. But the HD65's exceptional lumen output makes it an excellent choice for HD sports, video games, and other content when a low to moderate amount of ambient light is desired.

Remote range. While the HD65 has a great remote, getting the remote and projector to cooperate can be an adventure. The remote control has a range of roughly ten to fifteen feet, and it is highly direction-sensitive. We found it difficult to bounce the remote's signal off of our screen and have it reach the projector, so we had to resort to direct line of sight use - i.e., turning around in our seats to point the remote at the projector itself. Depending upon your installation, this could be a hassle.

As Optoma's second budget 720p machine, it makes sense to compare the HD65 to its predecessor, the HD70. Both are small, light, powerful 720p projectors that are both capable and affordable. However, there are some clear differences that should be pointed out.

Contrast. The HD65 is rated at 4,000:1 to the HD70's 3000:1, so there is a slight increase that, practically speaking, is a subtle real-world difference. The key advantage to the HD65 is not the improvement in contrast, but the higher lumen output. In a room with any ambient light, the HD65 will appear to be much higher in contrast due to its brightness advantage.

Color. As stated earlier, the HD70 had some subtle gradients in fleshtones and solid fields. We noticed none of these artifacts on the HD65. Thd HD65 also shows better color balance out of the box.

Every year, projectors get less expensive. And every year, there is a projector that pushes the price/performance envelope, trying to give the consumer more for less. The HD65 is such a projector. This sub-$1000 powerhouse cranks out nearly 1200 ANSI lumens while maintaining good ANSI contrast and color balance. It is a perfect choice for watching HDTV programming, using video game consoles, or simply watching a movie with a few lights on. Placement flexibility is sub-par, but the HD65 has one big advantage going for it - it is highly portable. The HD65 lets you take HD theater out of the home and into the homes of your friends and family, allowing your single purchase to bring some entertainment into the lives of those around you.

For more detailed specifications and connections, check out our Optoma HD65 projector page.