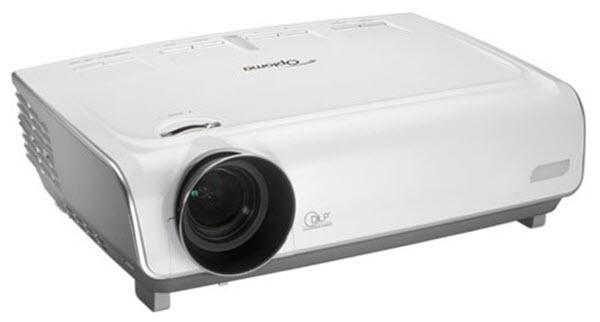 Last year's Optoma HD72 was a big hit among home theater enthusiasts, and it was one of our favorite models of 2006. Now Optoma has released the HD73, an updated edition of the HD72 that places a bit less emphasis on light output and more on pure cinema performance.

Connection Panel: One DVI-I port, one HDMI port, one set of YPbPr component inputs, one composite video, one S-video, one RS-232, one service port, one 12V relay, and a Kensington lock point.

The Optoma HD73 shares the same casework as the HD72. The two projectors have the same dimensions, the same weight, and the same color - white cases with silver lens accents. In fact, the only way to tell them apart is that the newer HD73 has a DCDi logo on the front, which is only a hint of what's inside.

The HD73 is a 1280x768 projector, known as WXGA. WXGA is an unusually flexible resolution, due to the fact that it can display three common signal formats in their cleanest native form without scaling. In addition to the computer format 1280x768, the HD73 can display standard XGA (1024x768) with black bars to the left and right, as well as the high definition video standard HDTV 720p (1280x720) with small black bars at the top and bottom. So if you have a mix of both video and computer data sources to display on your projector, the HD73's WXGA format is ideal for it.

The HD73 has a 1.2:1 zoom/focus lens, and it will throw a 100" 15:9 image from 11.2' to 13.4'. A 100" 16:9 diagonal image can be displayed from about the same distances, plus a couple inches. If you choose a 15:9 aspect ratio screen, then WXGA computer data images will be displayed full screen, and native 16:9 video will be displayed with small black bars top and bottom. Alternatively, you can use a 16:9 screen so that 16:9 video fills the frame fully, but if you do, the top and bottom edges of a WXGA image will fall onto the frame and thus not be viewable.

The throw distance of the HD73 will put the projector at about the same distance as many people like to sit from the screen. The projector must be placed at a distance of about 1.6 to 1.9 times the screen width. If you are most comfortable with viewing at that distance, you will need to ceiling mount the projector, or place it on a low table between the seats.

The HD73 has a fixed upward throw angle of about 32% of the projected image's height. So for example, the bottom edge of a 100" 15:9 image will be 16.5" above the lens centerline. This offset is good for a ceiling mount or low coffee table. However, it makes rear shelf mounting more difficult since it may require tilting the projector downward and using keystone correction to square up the image on the screen. This is something to avoid on this projector in particular since the keystone correction rescaling will prevent WXGA, XGA, and HD720p signals from being displayed in their native format.

With DVI-I, HDMI, and component inputs, the HD73 has connectivity to spare. The projector lacks a VGA port; however, VGA analog data signals can be transmitted to the HD73 by using a VGA cable and a VGA to DVI adapter.

The menu system is almost identical to that of the HD72 in terms of layout and features, though the HD73's menus have a bit more style. The one major addition is the DCDi submenu, which allows for fine-tuning of the HD73's deinterlacing and noise reduction circuits.

The remote control is busy, and has buttons for each individual source, each aspect ratio, overscan, digital zoom, H/V keystone, image mode, and image shift. While the buttons are small and the remote is somewhat crowded, it is also backlit to aid in navigation. It becomes easy to use once you become familiar with it.

The differences discussed thus far between the HD73 and its predecessor have been minor. However, the two differ significantly with regards to lumen output. In all image modes, the HD73 measures roughly 20% less light output than the HD72, which is due to a change in the color wheel. The HD72 has a small white segment in the wheel which boosts peak brightness, and the HD73 does not. The removal of the white segment reduces lumen output, but increases color saturation. The HD73 is therefore designed to optimize video performance while sacrificing a bit of brightness. This is not to say that the HD73 is too dim, however. It can light up a 100" diagonal screen with a bright, dynamic picture in a dark room. The end result, though, is that the HD72 can be used on larger screens without appearing washed out.

Our HD73 measures 378 ANSI lumens in cinema mode, with the lamp on high and the lens at its widest angle. By comparison, the same settings measured 500 ANSI lumens on the HD72. Our test unit did produce 500 ANSI lumens in Bright mode, with the lamp on high. Bright mode maintained reasonably good color balance, and was easily adapted for use with home entertainment. And while 500 lumens is about as high as the HD73 can go for theater use, it can be cranked up to produce 710 ANSI lumens for data projection if color balance isn't much of a concern.

Lumen output drops by 20% when you put the HD73 into low lamp mode, and it drops another 15% if you use the maximum telephoto zoom setting rather than its widest angle position--quite a significant drop for a 1.2x zoom lens. So for optimum brightness, place the projector as close to the screen as possible for any given screen size.

With any significant amount of ambient light in the room, the HD73's black level is similar to that of the HD72. The two projectors differ by only 1000:1 contrast, and the difference is therefore undetectable most of the time. The HD73 is rated at 4500:1 contrast, and it is able to faithfully reproduce shadow detail in most scenes. Enabling ImageAI boosts on/off contrast, so bright scenes will appear brighter while dark scenes will maintain integrity and black level.

Color in cinema mode did not quite match 6500K on our test unit, but some fine tuning fixed that right up. Bright mode, despite the name, gave good saturation and color accuracy without much tweaking. Our HD73 actually required less fine-tuning in Bright mode than it did in Cinema mode.

Thanks to the onboard Faroudja DCDi processing, the HD73's deinterlacing and scaling are a step above those of the HD72, which was impressive to begin with. 480i signals from DVD are deinterlaced and upscaled with exceptional precision, delivering very good sharpness and detail. High Definition content looks just as clean and sharp as it did on the HD72.

The HD73's noise reduction circuit does a fantastic job of cleaning up analog standard definition signals. And while noise reduction on some projectors ends up softening the image, the HD73 still looks sharp and detailed -- and noise-free. The reduction of image noise is another key advantage of the HD73 over the HD72.

As a final note, the HD73's wheel rotation speed is 5x as compared to the HD72's 4x. For anyone who may be hypersensitive to DLP rainbow artifacts, the incremental speed will help to reduce the phenomenon.

The Optoma HD72 was an outstanding projector when it was released one year ago, and it remains a solid, competitive projector today. The HD73 isn't an upgrade or replacement for the HD72, per se, but a similar projector made for different needs and environments. While the HD72 is a great multipurpose projector, the HD73 is a wonderful home theater projector for classic dark room viewing. As long as you keep its mounting limitations in mind and properly plan your installation, the HD73 is an impressive projector that can serve well as a cost-effective solution for great video and data display in your home theater.

For more detailed specifications and connections, check out our Optoma HD73 projector page.